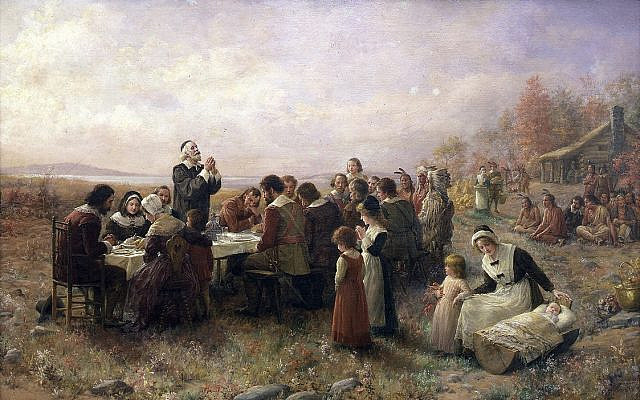 "The First Thanksgiving at Plymouth" (1914) By Jennie A. Brownscombe (Public domain)

On Thanksgiving morning, my Canadian wife and I, an Israeli, woke up and decided we would find an outdoor activity for the kids and us just to learn a difficult and inspiring lesson: Americans take Thanksgiving seriously. Very seriously. More seriously than any other day on the calendar. Not a single venue, farm, zoo, or museum can be found open. Despite Thanksgiving being observed in Canada on October 9th, it is nothing like its American version, which led to a different discovery — Thanksgiving is not about the pilgrims.

Sure, a lot of Thanksgiving is about the pilgrims landing in Williamsburg, Virginia, in 1619 or about governor Bradford landing on Plymouth Rock in 1620, where they famously read Psalm 107. We even have the text memorializing what they did on that day:

“And from this Psalme, and this verse of it, the Hebrews have this Canon; Four must confess (unto God) The sick when he is healed; the prisoner when he is released out of bonds; they that go down to sea, when they are come up (to land); and wayfaring men, when they are come to the inhabited land. And they must make confession before ten men, and two of them wise men, Psal. 107. 32. And the manner of confessing and blessing is thus; He standeth among them and blesseth the Lord, the King eternal, that bounteously rewardeth good things unto sinners, etc.”

Yet this is not truly what made Thanksgiving such a deeply rooted American tradition.

It was not until President Lincoln declared it a holiday in October 1963, months after the end of the Civil War, that it became an official holiday. In fact, Lincoln makes the civil war a foundational reasoning in his proclamation of Thanksgiving as a national holiday,

“The year that is drawing toward its close has been filled with the blessings of fruitful fields and healthful skies. To these bounties, which are so constantly enjoyed that we are prone to forget the source from which they come, others have been added, which are of so extraordinary a nature that they cannot fail to penetrate and soften even the heart which is habitually insensible to the ever-watchful providence of Almighty God. In the midst of a civil war of unequaled magnitude and severity, which has sometimes seemed to foreign States to invite and to provoke their aggression, peace has been preserved with all nations, order has been maintained, the laws have been respected and obeyed, and harmony has prevailed everywhere except in the theatre of military conflict; while that theatre has been greatly contracted by the advancing armies and navies of the Union.”

Lincoln understood that to bring a nation together there needs to be a common good, a shared destiny, and an understanding that we have something undebatable which brings us together. It is why of all holidays and days Americans share, the one with most articles and books on how to avoid debates with family members, Thanksgiving takes the crown. It is the time we focus on what brings us together, not on what tears us apart.

There is a famous joke about a math teacher who posed to his students the following problem: a man with ten billion dollars and two children leaves a will in which he writes: “to my older son I love and enjoy, I give 80% of my wealth while to my younger son I dislike a lot I leave 20% of my wealth”. The teacher went on to ask the student how much money the younger son would get, to which the wise student answered: “depends on how many lawyers the younger son ends up hiring.” The emotional pain of being disfavored is so great, and children never respond to it well. Why would Isaac put Jacob in the position of being disfavored?

Addressing this difficult question, Rabbi Jonathan Sacks explains this decision of Isaac was a response to his pain of seeing his brother Ishmael and Hagar being sent off by Abraham. Isaac did not want another rift in the family. Rabbi Sacks writes, “It is as if Isaac had said: I know what Esau is. He is strong, wild, unpredictable, and possibly violent. It is impossible that he should be the person entrusted with the covenant and its spiritual demands. But this is my child. I refuse to sacrifice him, as my father almost sacrificed me. I refuse to send him away, as my parents sent Hagar and Ishmael away. My love for my son is unconditional. I do not ignore who or what he is. But I will love him anyway, even if I do not love everything he does – because that is how God loves us unconditionally, even if He does not love everything we do. I will bless him. I will hold him close. And I believe that one day that love may make him a better person than he might otherwise have been. In this one act of loving Esau, Isaac redeemed the pain of two of the most difficult moments in his father, Abraham’s life: the sending away of Hagar and Ishmael and the Binding of Isaac.”

Alternatively, Rabbi Aharon Shechter from Yeshiva Rabbi Chaim Berlin explains that Isaac knew that Jacob would be the righteous one in the family, but he wanted to have someone who would be a people person and do the kind of outreach Abraham had done. Isaac thought he could split the work of Abraham between Jacob and Esau. Jacob would be the one studying and living up to spiritual perfection, while Esau would be the man of the world who would support his brother’s work and bring the word of God to the masses. Like Lincoln in 1863, Isaac sought to unite a divided family.

So, where did Isaac go wrong?

Isaac knew of Esau’s imperfections; he just didn’t know how far they go.

Rebecca was the only one who realized Esau was not just a man of the big world but that he was also morally bankrupt and would never be able to carry on the legacy of Abraham. She realized that with all the pain it involves, never shall the two dwell together. Yet, that does not make Isaac or Lincoln wrong. Unless proven otherwise, we must always do our best to build a common society based on our shared blessings and goals. We must always seek to come together for the common good and do our best to overcome our differences. If it takes delicious food for that to happen, so be it. Shabbat Shalom.