It emerged on Friday that Baroness Jenny Tonge is under investigation by the House of Lords Commissioner for Standards. As someone who has long campaigned on the improper use of rooms in Parliament for meetings where anti-Semitism is voiced, I welcome this news.  The investigation began in November and was recently completed. After consideration by the Committee on Privileges, it will be published early in 2017 (the Committee has a meeting on 16 January).

It was to discuss a book which bears an unctious endorsement from one Jenny Tonge. A book which suggests that Israel was created as a result of terror and which contains explicit anti-Semitism.  For example it suggests that after the War, the Zionist authorities kidnapped Jewish orphans ‘to snatch them from their adoptive European homes to ship them to Palestine as demographic facts-on-the-ground.’ At the meeting Karl Sabbagh reportedly ‘described organisations like the Board of Deputies, the Israeli Embassy, and Zionist bloggers as ‘enemies of truth, determined to ignore the facts, in case people understood the true merits of the Palestinian case.’ And he criticised the government’s formal adoption of the IHRA Definition of Anti-Semitism which (he said) “made the British government like an arm of the Israeli Embassy PR department.”

Moreover the meeting is described as ‘private’. As far as I know, it was not advertised. That is a second abuse of Parliamentary facilities. Parliament is a public building and meetings there should be open to all, unless there is a good reason otherwise (for example if an MP is seeing a group of constituents about a local matter).  There was no reason to have a closed meeting in this case, other than to suppress criticism of the book. If Tonge wants to host a private meeting with anti-Semitic content, she needs to book a room at commercial rates, like the London Forum does.

Tonge is under investigation on two counts: alleged failure to act on personal honour and alleged breach of rules on House facilities.

Take ‘personal honour’ first.  This is an interesting one. It appears in the Code of Conduct thus:

Remember when Tonge said that Israel should set up an inquiry to disprove allegations that its medical teams in Haiti “harvested” organs of earthquake victims for use in transplants?

I would hope that the House regards that as a breach of the ‘personal honour’ obligation.

As regards the allegation of a breach of rules on House facilities, Tonge has hosted several meetings where anti-Semitism has been voiced and last Wednesday’s meeting appears to have been closed, when it should have been open to all. She clearly has abused the privilege of Lords to hold meetings in Parliament at no cost. But my research has indicated that there are few formal rules on the purposes for which Lords can book rooms. There is a brief reference here and I was sent this by the Lords Press Office: 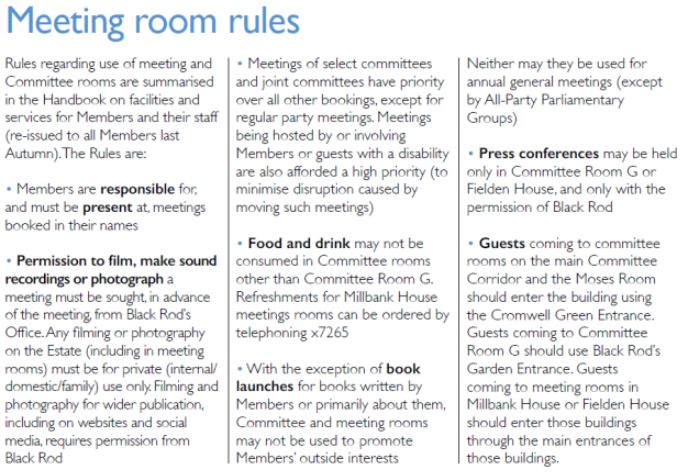 With good reason, it appears to be assumed that Lords will act according to ‘personal honour’ in booking meeting rooms. But in the case of Baroness Tonge, it seems that assumption may be unjustified.  Now that she is no longer a member of the Liberal Democrat Party, she will no doubt feel free to host more meetings in Parliament where anti-Semitic discourse is voiced. So I hope that the investigation by the Commissioner for Standards results in action to prevent this.  It is a nonsense for the government to formally adopt the IHRA definition of anti-Semitism while at the same time turning a blind eye to meetings with anti-Semitic content within the Parliamentary Estate.

And maybe (solely with Baroness Tonge in mind) the rules on booking meeting rooms need to be tightened…….