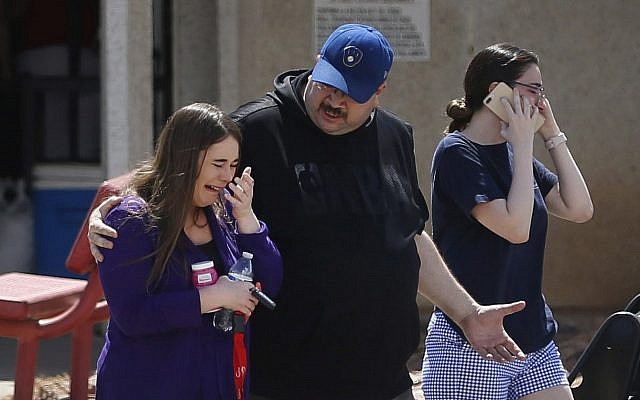 People arrive at MacArthur Elementary looking for family and friends, as the school is used a reunification center during the aftermath of a shooting at the Walmart near the Cielo Vista Mall, August 3, in El Paso, Texas. (Briana Sanchez/ The El Paso Times via AP)

No one could fail to have been moved by the double mass shootings in the United States last weekend — the associated loss of too many lives, too many injured and the dozens of families whose lives were forever changed by being in the wrong place at the wrong time on a summer weekend.

The resultant press coverage, while important, found commentators grasping for new insights, as they needed to fill 24/7 news cycles over many days when often there was simply nothing new to report. That led many of them to exaggerate the facts and, in some cases, perhaps even create falsehoods in order to fill the need for news.

However, the real facts, the real statistics, clearly point to the fact that there are simply too many guns in the United States making it too easy for people living in today’s polarized world to take out their frustrations with bullets instead of dialogue.

A recent survey by National Public Radio (NPR) found that in 2017, the last year for which data is available, the US had 120.5 guns per 100 people in the country. They were Number 1 in the world in that category and the second place country, Serbia, was way down on the list at 37.82 guns per 100 people. Israel, by comparison, where gun ownership is tightly controlled, has 7.3 guns per 100 and Australia, where everyone in the less populated areas seems to have a weapon, has just 13.7.

According to Amnesty International 80% of all violent gun deaths worldwide occur in the US. Even if one looks at all deaths from firearms including accidental deaths, suicide and the like the World Economic Forum’s 2016 statistics show that the US was No. 2 with 37,200 such death second only to Brazil’s 43,200. On average, according to the Gun Violence Archive, in the US an average of 43 people a day lose their lives to gun violence.

Amnesty International further points out that there has been no gun control legislation passed in the United State in the last three years.

Seemingly, nobody questions the accuracy of the numbers. They really cannot be questions as with so many groups doing the analysis the system is self-checking. The disagreement is only about the cause.

Over the last week, there has been a lot of talk about violent video games being the cause. However, people all over the world are exposed to violent video games yet it is only the US that has this level of gun violence. Others say that this is the result of living in a polarized society. But that excuse also does not hold up. Populations all over the world today are living in polarized societies but it is only in the US where people engage in mass shootings (an average of 300 per year each year for the past five years according to the Gun Violence Archive).

It would seem that the core issue is that there are times in the history of society when human life ceases to have ultimate value. That is when someone, to satisfy his/her need for psychological satisfaction, willingly chooses to sacrifice human life itself. This is much more than a personal decision; it is nothing less than a societal fault that needs to be addressed in every institution of that society. This includes schools, religious groupings, government, the work place and, most basically, the family and local community as well.

Venezuelan journalist Edgar Ramirez said: “For me, no ideological or political conviction would justify the sacrifice of a human life. For me, the value of life is absolute, with no concessions. It’s not negotiable.”

The leadership of a society that chooses not to act in the face of the kinds of statistics known to them are themselves no less guilty of the crime than the ones who pulled the trigger.

Cicero in his orations in Rome would often opine, “O tempora, O mores!” which translates to shame on the times and its customs. Indeed, shame on those who can do something about this and choose to sit idly by collecting their money from America’s gun lobby. For shame indeed!