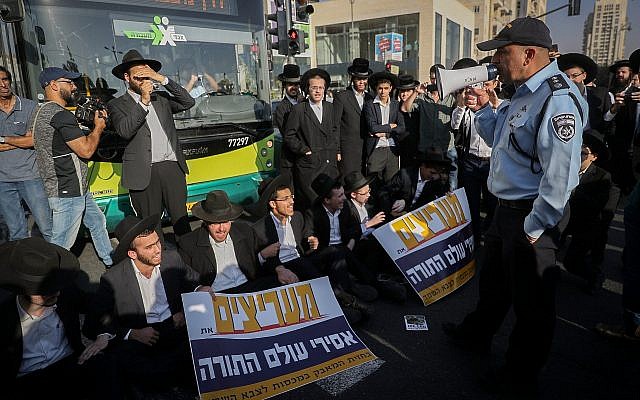 To protest the arrest of two yeshiva students charged with draft evasion, the extremist “Jerusalem Faction” group called for a Day of Rage today. This follows yesterday’s events when hundreds of protesters took to the streets of Jerusalem, Maaleh Adumim, and Beit Shemesh to block traffic.

While disruptive, there are some positives. Here are the top 10 best parts about a Jewish Day of Rage:

8. No matter which side you’re on, you still have ten people for mincha

7. When you get worn out from raging, there’s a twenty-minute break for whitefish

6. Counter-protestors are battle-tested from long waits at Israeli post office

4. All the follow-up articles asking “why aren’t Jewish millennials coming to rage?”

3. Infighting leads some to break off and form Carlebach and egalitarian rage groups

1. Before it can get violent, half the group will have to go home to use the toilet

For a standup comedy show or cultural program about Israel, contact Benji here.

A “traditional” Day of Rage schedule

About the Author
Since making aliyah in 2006, Benji Lovitt has performed stand-up comedy and educational programs for groups including Jewish Federations, Chabads, synagogues, Masa Israel Journey, and Birthright Israel. His perspectives on aliyah and Israeli society have been featured on Israeli TV and radio and in publications such as USA Today, Time Magazine, the BBC, and more. Benji has worked as a cross-cultural trainer with groups including the Ministry of Foreign Affairs and Masa Israel and is a popular presenter on the Limmud International circuit. During 2014's Operation Protective Edge, his humorous observations on the war led to his being called in Israel "the only reason to go on Facebook.”
Comments
Advertisement