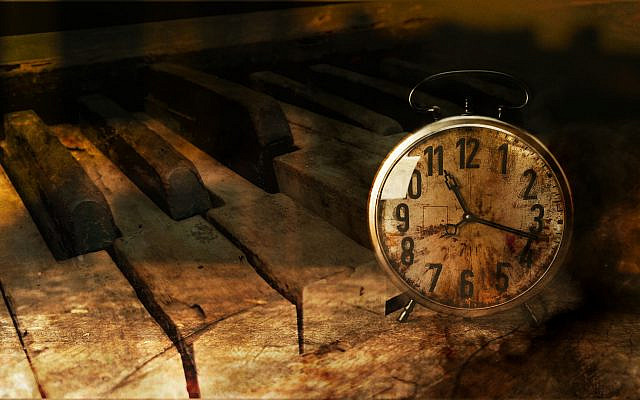 Moses’ long and tempestuous career is about to end. With words of blessing and encouragement he hands on the mantle of leadership to his successor Joshua, saying “I am a hundred and twenty years old now, and I may no longer able to enter and to leave, since the Lord has told me, ‘You shall not cross this Jordan.’” (Deut. 31:2)

As Rashi notes, it is written, “shall not”, although Moses is still physically capable. He is still in full bodily vigour, “his eyes had not grown dim, nor his vitality fled.” (Deut. 34:7) But he has reached the end of his personal road. The time had come for another age, a new generation, and a different kind of leader.

But before he takes his leave of life, God has one last command for him, and through him, for the future.

“So now write down this Song and teach it to the Children of Israel. Place it in their mouths, that this Song may be My witness against them. (Deut. 31:19)

The plain sense of the verse is that God was commanding Moses and Joshua to write out the song that follows, that of Ha’azinu (Deut. 32:1-43). So Rashi and Nahmanides understand it. But the Oral Tradition read it differently. According to the Sages, “So now write down this Song” applies to the Torah as a whole. Thus the last of all the 613 commands is to write – or at least take part in writing, if only a single letter – a Torah scroll. Here is Maimonides’ statement of the law:

Every Israelite is commanded to write a Torah scroll for himself, as it says, “Now therefore write this song,” meaning, “Write for yourselves [a complete copy of] the Torah that contains this song,” since we do not write isolated passages of the Torah [but only a complete scroll]. Even if one has inherited a Torah scroll from his parents, nonetheless it is a mitzvah to write one for oneself, and one who does so is as if he had received [the Torah] from Mount Sinai. One who does not know how to write a scroll may engage [a scribe] to do it for him, and whoever corrects even one letter is as if he has written a whole scroll.[1]

Why this command? Why then, at the end of Moses’ life? Why make it the last of all the commands? And if the reference is to the Torah as a whole, why call it a “song”?

The Oral Tradition is here hinting at a set of very deep ideas. First, it is telling the Israelites, and us in every generation, that it is not enough to say, “We received the Torah from Moses,” or “from our parents.” We have to take the Torah and make it new in every generation. We have to write our own scroll. The point about the Torah is not that it is old but that it is new; it is not just about the past but about the future. It is not simply some ancient document that comes from an earlier era in the evolution of society. It speaks to us, here, now – but not without our making the effort to write it again.

There are two Hebrew words for an inheritance: nachalah and yerushah/ morashah. They convey different ideas. Nachalah is related to the word nachal, meaning a river, a stream. As water flows downhill, so an inheritance flows down the generations. It happens naturally. It needs no effort on our part.

A yerushah / morashah is different. Here the verb is active. It means to take possession of something by a positive deed or effort. The Israelites received the land as a result of God’s promise to Abraham. It was their legacy, their nachalah, but they nonetheless had to fight battles and win wars. Lehavdil, Mozart and Beethoven were both born to musical fathers. Music was in their genes, but their art was the result of almost endless hard work. Torah is a morashah, not a nachalah. We need to write it for ourselves, not merely inherit it from our ancestors.

And why call the Torah a Song? Because if we are to hand on our faith and way of life to the next generation, it must sing. Torah must be affective, not just cognitive. It must speak to our emotions. As Antonio Damasio showed empirically in Descartes’ Error[2], though the reasoning part of the brain is central to what makes us human, it is the limbic system, the seat of the emotions, that leads us to choose this way, not that. If our Torah lacks passion, we will not succeed in passing it on to the future. Music is the affective dimension of communication, the medium through which we express, evoke, and share emotion. Precisely because we are creatures of emotion, music is an essential part of the vocabulary of humankind.

Music has a close association with spirituality. As Rainer Maria Rilke put it:

Words still go softly out towards the unsayable.
And music always new, from palpitating stones
Builds in useless space its godly home.[3]

Song is central to the Judaic experience. We do not pray; we daven, meaning we sing the words we direct toward Heaven. Nor do we read the Torah. Instead we chant it, each word with its own cantillation. Even rabbinical texts are never merely studies; we chant them with the particular sing-song known to all students of Talmud. Each time and text has its specific melodies. The same prayer may be sung to half-a-dozen different tunes depending on whether it is part of the morning, afternoon, or evening service, and whether the day is a weekday, a Sabbath, a festival, or one of the High Holy Days. There are different cantillations for biblical readings, depending on whether the text comes from Torah, the prophets, or the Ketuvim, ‘the writings’. Music is the map of the Jewish spirit, and each spiritual experience has its own distinctive melodic landscape.

Judaism is a religion of words, and yet whenever the language of Judaism aspires to the spiritual it modulates into song, as if the words themselves sought escape from the gravitational pull of finite meanings. Music speaks to something deeper than the mind. If we are to make Torah new in every generation, we have to find ways of singing its song a new way. The words never change, but the music does.

A previous Chief Rabbi of Israel, Rabbi Avraham Shapiro, once told me a story about two great rabbinic Sages of the nineteenth century, equally distinguished scholars, one of whom lost his children to the secular spirit of the age, the other of whom was blessed by children who followed in his path. The difference between them was this, he said: when it came to seudah shlishit, the third Sabbath meal, the former spoke words of Torah while the latter sang songs. His message was clear. Without an affective dimension – without music – Judaism is a body without a soul. It is the songs we teach our children that convey our love of God.

Some years ago, one of the leaders of world Jewry wanted to find out what had happened to the “missing Jewish children” of Poland, those who, during the war, had been adopted by Christians families and brought up as Catholics. He decided that the easiest way was through food. He organised a large banquet and placed advertisements in the Polish press, inviting whoever believed they had been born a Jew to come to this free dinner. Hundreds came, but the evening was on the brink of disaster since none of those present could remember anything of their earliest childhood – until the man asked the person sitting next to him if he could remember the song his Jewish mother had sung to him before going to sleep. He began to sing Rozhinkes mit Mandlen (‘Raisins and Almonds’) the old Yiddish lullaby. Slowly others joined in, until the whole room was a chorus. Sometimes all that is left of Jewish identity is a song.

Rabbi Yechiel Michael Epstein (1829-1908) in the introduction to the Aruch HaShulchan, Choshen Mishpat, writes that the Torah is compared to a song because, to those who appreciate music, the most beautiful choral sound is a complex harmony with many different voices singing different notes. So, he says, it is with the Torah and its myriad commentaries, its “seventy faces”. Judaism is a choral symphony scored for many voices, the Written Text its melody, the Oral Tradition its polyphony.

So it is with a poetic sense of closure that Moses’ life ends with the command to begin again in every generation, writing our own scroll, adding our own commentaries, the people of the book endlessly reinterpreting the book of the people, and singing its song. The Torah is God’s libretto, and we, the Jewish people, are His choir. Collectively we have sung God’s Song. We are the performers of His choral symphony. And though when Jews speak they often argue, when they sing, they sing in harmony, because words are the language of the mind but music is the language of the soul.

We recently published ‘I Believe’, a new collection of weekly parsha essays from Rabbi Sacks zt”l, written in 2020 and with a brilliant new foreword from President Isaac Herzog.

This is the fifth book in the Covenant & Conversation series of themed essays. Previous themes have been Leadership, Spirituality, Life-Changing Ideas, and Ethics. Each of the essays in this new volume find faith within the Torah portion of the week, and each one concludes with a powerful belief statement from Rabbi Sacks.

Order ‘I Believe‘ directly from Koren Publishers and, for a limited time only, please use the discount code BELIEVE for a 10% discount.

With thanks to the Wohl Legacy for their generous sponsorship of Covenant & Conversation. Maurice was a visionary philanthropist. Vivienne was a woman of the deepest humility. Together, they were a unique partnership of dedication and grace, for whom living was giving.
About the Author
Rabbi Lord Jonathan Sacks (1948-2020) was a global religious leader, philosopher, the author of more than 25 books, and moral voice for our time. He served as Chief Rabbi of the United Hebrew Congregations of the Commonwealth from 1991 to 2013. Rabbi Sacks passed away in November 2020. His series of essays on the weekly Torah portion, entitled "Covenant & Conversation" will continue to be shared, and distributed around the world,
Related Topics
Related Posts