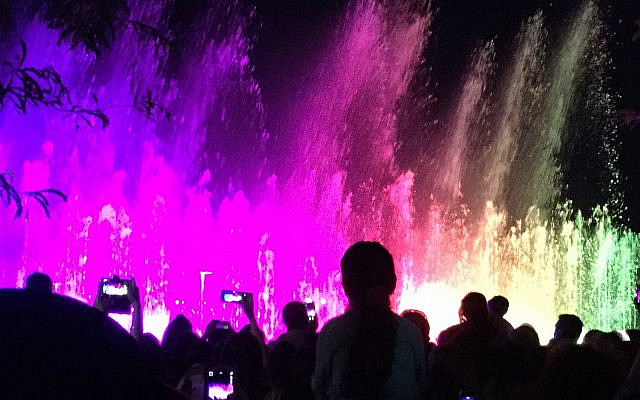 A fond memory: A crowd at the Jerusalem Festival of Light, pre-Covid-19

Professor Yehuda Carmeli, a well-known Israeli epidemiologist, recently estimated that there will be about 8,000 deaths from the coronavirus disease (COVID-19) in Israel by the time the virus has run its course. This contrasts sharply with the current total of 330 deaths (as of July 5). This projection is based on the study of existing data plus the assumption that 80 percent or more of the population will eventually be infected by the virus, although most will have no visible symptoms.

In addition to reviewing Prof. Carmeli’s main ideas about COVID-19 and looking at his results for Israel, this article applies a model embodying his assumptions to the US, UK and Canada, and contrasts the predicted total number of deaths with the current number of deaths attributed to the virus in each country.

Yehuda Carmeli is a professor at the Sackler School of Medicine at Tel Aviv University, and heads Israel’s National Institute for Antibiotic Resistance and Infection Control.  He is also head of the Department of Epidemiology at the Tel Aviv Sourasky Medical Center.

David Horovitz, editor-in-chief of the Times of Israel, conducted a highly illuminating interview with Prof. Carmeli on June 15, which was published on June 17.

Key ideas expressed by Prof. Carmeli in the interview:

*  Age seems to be the critical variable determining the mortality rate.  For those under 50, the mortality rate is extremely low. Deaths will be concentrated among those 70 and above, and these will account for more than half of all COVID-19 deaths.

*  The mortality rate would go up if the number of serious cases occurring at one time overwhelms the health system.  Excessive pressure on hospitals would result in more deaths, both for COVID-19 patients and for non-COVID-19 patients.  The main goal of “flattening the curve” is to avoid this from happening.

*  Were health system resources large enough to handle any flow of patients, the wearing of masks, social distancing, hand washing and imposed lockdowns will not change the total number of deaths attributed to the COVID-19; rather, these actions will determine whether the same number of deaths will occur over a shorter or longer time period.  This will be the case unless an effective drug treatment or effective vaccine becomes widely available early enough.

*  Because the health system has limited capacity in most places, the wearing of masks, social distancing, etc, are the main tools for flattening the curve and preventing excessive deaths.

*  A vaccine is unlikely to have much effect in reducing mortality because such vaccines are usually least effective among those who need them most:  the elderly and those with compromised immune systems.  This suggests that a future widely-distributed vaccine would reduce deaths mostly among younger patients, and not much overall.

* Drug treatments:  Remdesivir has been found effective in reducing progression of the disease to more severe levels.  However, to this point in time, its supply is quite limited.  Dr. Carmeli said:  “I think the most likely treatment will be for patients with relatively severe or severe disease. I think we’ll be able maybe to prevent –it’s a guess — maybe 20 percent of the deaths. That’s what we can expect from a good treatment, not more than that.”

The interview with Prof. Carmeli seems to have been conducted before claims were publicized as to  the effectiveness of dexamethasone,  a steroid.  In trials it has been found to reduce mortality of patients on ventilators by 33% and for patients with oxygen support (but not ventilators) by 20%. The drug is widely available and inexpensive. If these results hold up in large scale usage and are not found to have serious side effects, its future use, or the use of another drug found to be effective, might reduce deaths from COVID-19 by 20%, which would conform with Prof. Carmeli’s guess.

*  Israel had a low mortality rate relative to its total population through the end of May 2020, with less than 300 deaths attributed to the virus at that time out of a population of 9.0 million.  This favorable result owed much to prompt efforts to control incoming travel and an effective lockdown.   However, that success seemed to have promoted unwarranted complacency about COVID-19, which has led, in combination with a rapid easing of the lockdown, to a surge in new infections.

*  By limiting exposure to the virus to a very small part of the population through May, Israel postponed most of the serious COVID-19 infections and deaths to the future.  So far, Israel’s hospitals have been able to handle the disease rate without being overwhelmed.  However, as shown in a paper by the Shoresh Institute, Israel’s relative paucity of hospital beds and nurses per capita, in comparison with other OECD countries, leaves its health system with little margin to handle a major health crisis. If Israel refrains from a full lockdown in the future, its health system may be overwhelmed, raising the mortality rate.

*  Virus mutation:  Some hope that a future mutation will weaken the virus, reducing mortality rates.  In the interview, Prof. Carmeli was somewhat skeptical of such a possibility.  “If there will be a very nonvirulent strain that is very contagious, and will infect many people, who will get immunity bill not be sick, that would be nice…But, I don’t know that that’s going to happen.  I think that’s too much to expect.”  If such a mutation occurs, the total projected number of COVID-19 deaths would be reduced, the reduction depending on when such a favorable mutation occurs.  But, there is also the possibility that a mutation might increase the severity of the illness, raising mortality rates.

There are reports that recent research has identified a mutation of the coronavirus that has become increasingly dominant in recent months.  This mutation seems to have made the virus more contagious without affecting its severity.  If the incidence of serious cases of COVID-19 remains the same, a more contagious form of the virus would increase the risk of overwhelming the health system.  The recent surge in the number of new inflections in Israel and the U.S. may be confirmation of a more contagious stage.

A model was developed based on the assumptions about the mortality rate for different age groups described by Prof. Carmeli in his Times of Israel interview.  The following table shows the great contrast between Israel’s distribution of population by age and the distribution of projected total COVID-19 deaths by age.

In discussing variations between regions or countries, Prof. Carmeli identified the region’s age distribution as a key factor, although he acknowledged that there are “a lot of unknowns” that might account for different patterns of outcomes.  What might be some of these other factors?  One might be the incidence of medical complications such as lung disease, diabetes, heart disease, and immunodeficiency in the population. Another would be the quality and quantity of staff and facilities in the health care system. A third would be the access to health care for vulnerable subgroups in the population.

If age is the critical variable, then applying the model for Israel to the relative age distributions of the U.S., Canada, and the U.K. may yield reasonable estimates of the total number of COVID-19 deaths that each country might experience.  Subsequently, taking account of non-age factors could then modify these projections.

The model’s results are shown in the following table.  For each country, the table shows the size of the population by age group and the projected number of deaths by age group, with the respective percentage distributions. Finally, the overall mortality rates per 100,000 of the population are calculated.

A general caveat:  As with all models, additional data and analysis might substantially alter the results.

Of the four countries, Israel has been the most effective at postponing the devastating effects of COVID-19, while the U.K. has the poorest record.  There has been much criticism of the way the British government has handled the virus threat, and this is reflected by the high 48% figure.  The U.S. performance is second worst, by this measure. For all four countries, if these projections are correct, the worst is still ahead.

As noted above, widespread use of dexamethasone or perhaps another drug might reduce deaths going forward.  If the reduction is as much as 20%, the totals would be reduced as follows:

A successful vaccine would produce further reductions, mainly among younger patients, although the reduction would be smaller the longer the time it takes until such a vaccine is widely available.

A possible downside:  Not enough time has elapsed to determine whether people who have been exposed to the virus and have antibodies will remain immune over time. If such immunity is not long-lasting, then future re-infection is possible, which could increase the overall mortality rate.

Overall, these projections convey grim future by suggesting that many countries are still at an early stage of the infection.  However, even if these long term projections are correct, for balance, one can point out that most of the population will come through unscathed.

Professor Carmeli estimated that around 4,000 to 5,000 Israelis in the 70+ age group will die from COVID-19.  If correct, this figure would be less than one percent of the 705,000 persons in the 70+ age group.  This low number assumes that there will be many in this age group who will be exposed to the virus, will develop antibodies, but will not develop symptoms.

Beyond the mortality risk, there are anecdotal reports from medical personnel that some of those who survive COVID-19 experience a slow recovery, with ongoing fatigue and other physical symptoms as well as psychological distress.  It is too soon to know whether some of these adverse effects are permanent and to measure their incidence.  If significant, such impacts would clearly broaden the risks associated with getting COVID-19.

While the probability of death or continuing disabilities may be low, these outcomes may be so fear-inspiring that many vulnerable individuals will continue to self-isolate and take other precautions to avoid becoming infected.  However, some among the vulnerable, who find their lives too empty without family and friends and their cherished activities, may choose to carry on, even at the risk of exposure to the virus and its possible devastating results.

The imperative to bolster the economy means that in Israel, and probably most other countries, a future lockdown of the economy will not recur as long as the health system can cope with the flow of COVID-19 infections.  With much of the economy remaining open, and with much of the population working, shopping, and taking public transportation, most of the elderly and others at high risk will likely choose to continue wearing masks, avoiding crowds, and coping with the effects of too much isolation, likely for an extended period of time.