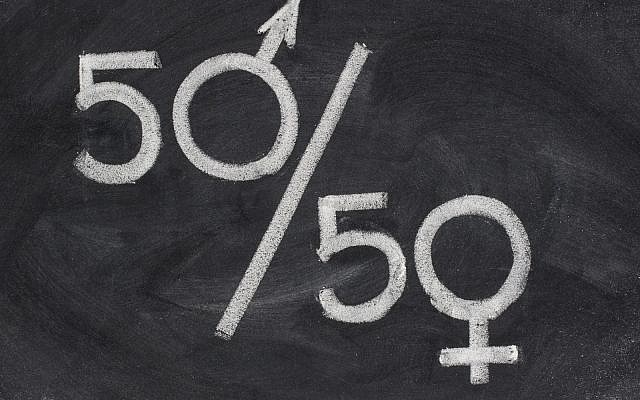 By asexual, I mean here: without making distinctions between the sexes, not: without sexual activity.

This tendency, to ignore sex differences obviously stems from a desire in women to escape suffocating and murderous sexism. Men often join that call because sexism doesn’t look good on them and makes them feel uncomfortable. And solidarity with women not rarely gives them more access to them – and sex!

Besides good and bad motives, let’s study concrete attempts to desexing Judaism and society and their effects.

But first of all, let’s look at a parallel between sexism and anti-Semitism. To escape suffocating and murderous Jews’ oppression, many Jews have dreamed and even advocated ignoring the differences between Jew and Gentile. The result: skyrocketing assimilation.

Intermarriage is not undesirable because it’s an inferior relationship but because a Jew’s commitment to perpetuate Judaism should be so passionate that s/he only wants a Jewish partner who’s equally committed to Jewish survival. It’s great to profit from knowledge and wisdom (and friendship and even love) of non-Jews but not to such a degree that it leads to the downfall and disappearance of the Mother of all Monotheism.

This is not only an issue of preservation – museums can do that. Judaism needs to stay alive because it has, like rare plants discovered in the rainforest, enormous potential to enrich – no: save – humankind. And that is not only a vague promise – it’s potential is clearly visible for all who look.

Ending the difference between Jews and Gentiles, whether from good or bad motives, is throwing out the baby with the bathwater.

And if that all isn’t bad enough, assimilation does not remove hatred for Jews. There were no more-assimilated Jews than the German ones and in that melting pot Nazis grew strong. When we don’t want to know anymore that we’re Jews, some Gentiles will remind us – and not always in the friendliest ways. Assimilation dumps the baby without the bathwater.

Jews were so sick of all discrimination that when they built the Jewish State, they purposely ignored all differentiation between Jews. (Except for that Jews from Europe got houses and Jews from Arab countries got to live in tents for a couple of years and do menial labor – even if they were intellectuals, well-to-do or prominent in their countries of expulsion.) The “non-discrimination” idea worked out so that weak populations who needed extra support did not receive any.

Woodstock, Flower Power, Free Love. Make Love – Not War, the Sixties, it meant much closeness between men and women but also: sex whenever men wanted, without any obligation. This egalitarian freedom worked out as an explosion of male dominance.

The job market opening up to women meant that they no longer were “jailed” inside the home as unpaid and underappreciated homemakers and child-raisers. This had some good aspects but also turned out a trap. Now men and women were supposedly equal, men and women supposedly would shoulder household chores equally, but often that ended up meaning that men worked like crazy collapsing in exhaustion once at home, while women now had two jobs: one inside and one outside the house – first I’ll do the dishes and then I can sit.

Not only did women do all the pregnancies; even if for the rest they became equal in work at home, often the men made more of a career, and the double-income couples would hire women (!) to clean, cook, be nannies and babysitters. This new “equality” did not erase sexism at all.

Jerusalem’s Museum On The Seam has now opened a new exposition “The Women Behind.”

The Museum owes its name to being located at the seam between ultra-Orthodox Jewish Jerusalem and Muslim Jerusalem regained from Jordan, 51 years ago. It sees its location as a call to help bridge the gap between the two populations.

From the “peace train” – the overly pretentious euphemism for the Jerusalem light railway that serves both Arab and Jewish neighborhoods – I saw a giant banner hanging from its façade:

This must be a sure way to unite Jewish and Muslim Jerusalemites – in joint opposition. May I add my voice?

The solution to sexism is not to ignore biological, traditional, cultural, religious and emotional differences.

Rather, women need to be valued for their qualities and be raised to be assertive. Men must learn from childhood to be good allies to women. That means that their parents and educators need to give the example.

PS: The obsessive talk in Orthodox Judaism if women could be rabbis doesn’t begin to address the problems Judaism has with women. Surely, it can boast of thousands of years of protecting women. But what to do when a woman wants to be taken seriously and seen as strong?