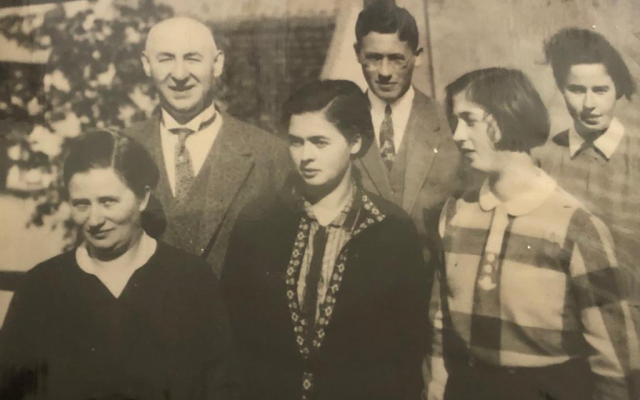 “We don’t know anything about what happened to our (mutual) grandparents. Our parents never talked about them,” my American cousins told me when I visited them last year.

The two sons of my mother’s brother, the late Dr. Kurt Hirsch, live comfortable lives in Virginia. Jack and Harry and their families maintain their connection with Israel and Judaism, and are loyal American citizens. We have not grown up together, for obvious reasons, but over the years we have kept in touch, whether by letters, email or occasional visits to one another’s country. We are all more or less the same age, which helps to keep the bond between us strong.

I did not have much information about what happened to our grandparents, Max and Paula Hirsch, either. I knew only that in 1940 they had been due to leave their home town of Sprottau, Silesia (then Germany, today Poland), to make their way to Cuba at some point, but had never arrived. The whole thing was a mystery, and had obviously caused immense grief to their children: my mother in England, her brother and sister on either coast of the USA, and another sister in Israel.

I mentioned this to my cousin in Israel (son of my mother’s sister) and he claimed to have very little knowledge of the subject, though he sent me copies of the memorial pages (Gedankblatte) his mother had filled out for her parents for Yad Vashem. For both Max and Paula Hirsch the details of when and where they had died were ‘unbekannt’ (unknown). There is no record of them in any official archive.

“Don’t you remember? We found the Red Cross messages between them and our mother in their flat after Dad died,” my sister reminded me when I told her about this. And then it came back to me.

Over the course of a year my two sisters and I would meet one evening each week to clear out the contents of our father’s flat. One small box tucked away in a cupboard contained some tiny dolls that had evidently come from our mother’s childhood home. The box also contained the few Red Cross messages (sent from Red Cross Message Bureau 80 at 130 Station Road, Hendon N.W.4) she had sent to her parents in 1941 and their replies to her from Germany. The flimsy paper used at the time was disintegrating, and after much heart-searching we decided to deposit those precious mementos for safekeeping in the Yad Vashem archive. We were given photocopies of the pages, and it was with a heavy heart that we left the originals there.

After being reminded of their existence by my sister, I located the photocopies, typed the texts into my computer, and promptly sent the file to my sisters and my cousins.

The first Red Cross letter was sent from Sprottau and is dated 29 July 1941. The number of words is limited to twenty, and mentions hopes of reaching Cuba via Barcelona. The next Red Cross letter from Sprottau is dated 19 November 1941 and notes that the journey to Cuba seems unlikely. This is followed by a Western Union Cable from Norfolk, Virginia, evidently from my uncle, dated 12 November 1941 and stating solely ‘LEFT FOR CUBA.’ How he knew this I don’t know, and nor it seems do my cousins. My uncle had presumably arranged the visa for Cuba, and also sent tickets for the voyage.

The last Red Cross letter from my grandparents was sent from Leignitz, which was then (22 March, 1942) in Germany but is now in Poland. It states that they are well, and that they hope to be reunited with their children.

Of course, that was not to be, and they probably knew that by then. I have no idea why they went to Leignitz, though they may have been ordered by the Gestapo to report there, as it seems that from there they were deported to one of the concentration camps. Or shot. Nobody knows.

While browsing Facebook a few days ago, I came across a question asked by one of the members of a group of descendants of Holocaust survivors asking till when it had been possible for Jews to leave Germany.

One of the replies contained the link to the Jewish Virtual Library, and the order issued by the Gestapo on 23 October 1941 (https://www.jewishvirtuallibrary.org/order-banning-the-emigration-of-jews-from-the-reich) banning Jews from emigrating from the Reich. Among the comments were accounts of people whose relatives had escaped by boarding a train in October 1941 that went from Berlin to Lisbon. The train was sealed and guarded by the Gestapo, and the journey took five or six days. Passengers remained in Lisbon for a few days, before sailing to America or Cuba.

So it seems that for reasons unknown my grandparents could not get to the train that was to be their salvation in time to leave that benighted country. Just another story of pain and grief like countless others, but it’s my own and my family’s private pain and grief.