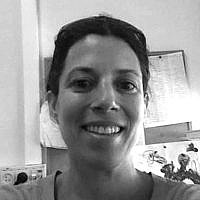 The Blogs
Sara Maimon
Apply for a Blog
Please note that the posts on The Blogs are contributed by third parties. The opinions, facts and any media content in them are presented solely by the authors, and neither The Times of Israel nor its partners assume any responsibility for them. Please contact us in case of abuse. In case of abuse,
Report this post.

Having swept the Western World, the transgender movement is slowly making itself known here in Israel. Last year, we heard narratives about transgender suicide (Netta Hadid) and transgender bullying victims (Osher Band), setting the stage for the next level: transgender children, who at early ages “come out” as the opposite sex.

While men and women may both suffer from gender dysphoria, almost all the transgendered persons featured in the media are natal males. Ha’aretz’s Rena is no different. The developing Israeli narrative as exemplified by this article differs little from the Western one, imitating such salient tropes as “bravery”, and transitioning as “being true to herself.” Nine-year-old Rena, born a boy, declared his interest in all things feminine from an early age, experiences intense psychological relief at being told he can actually be a girl, usually upon the advice of a gender identity professional. They become happy and well adjusted as other children, living happily ever after, or at least until puberty, when the rules of the game change, often leading to puberty blocking drugs, followed by hormones of the opposite sex.

In fact, a children’s gender clinic, staffed by endocrinologists, was established in Israel at Ichilov hospital in 2013. Although this is a late start relative to Western countries, Ichilov is wasting none making up for lost time: from a modest beginning of 3 patients, they now proudly count 200. (Numbers from the above linked Ha’aretz article.)

In all, the story is not terribly remarkable, but it differs from standard journalism in one significant way: the absent of any voices of dissent. Journalists often emphasize their own slant, but most still include a perfunctory quote or two of opinions which differ from the conclusion. The absence of such dissent, gives the impression that affirming the child’s desired gender while denying biological sex, is unanimously agreed on as the best course for dealing with gender dysphoria in children.

Indeed, even in Israel, in many social activist circles in it is as if the issue is a done deal, almost unthinkable not to support these changes. Challenge the wisdom of treating minors with irreversible sex hormones, or of allowing male bodies persons in women’s prisons, dressing rooms and sports competitions, and you will be met with accusations of bias; “transphobia.” (I can’t wait to read the comments here).

Perhaps this is how a sweeping legal revolution took place without you or barely anyone in the country hearing a word about it.

In the US, for a period of 5 years and more that the nation was actively debating same sex marriage, the Obama administration quietly removed the requirement for bodily changes in order to obtain sex change recognition at the federal level, with barely any discussion at all. Less than a year after the SCOTUS win, Obama ordered the recognition of school children’s gender identity, allowing them access to opposite sexlocker rooms and private spaces, at the child’s declaration alone.

But you probably heard more about all that put together, than the parallel events in Israel since the supreme court in 2014 removed to requirement for genital surgeryremoved the requirement for genital surgery to be legally recognized as the opposite sex. And unless you are a health ministry employee, you almost certainly heard nothing about the health ministry’s memo this past February, to drop the requirement for medically induced physical changes altogether, and to drop the minimum age requirement from 18 to 16. Its as if there is nothing to challenge anymore, that Israel is just getting in step with the rest of the world.

But is that really so? Elsewhere in the world, cracks are beginning to appear in the system, and it would be only wise for us to take a look.

The article in Haaretz would have you believe that no such cracks appear. The only dissenting voice it reports is that of Kenneth Zucker, claiming that Zucker was sacked for practicing conversion therapy on transgender children. In fact, Zucker’s employer apologizedfor misrepresenting his “watchful waiting” approach as conversion therapy, after paying a hefty settlement fee…

In the the US, the backlash against this change has been largely led by reactionary conservatives, not associated with support for women’s rights and minorities, leaving the impression that the gender identity is indeed the way of the future. But in the UK, the plot is developing differently.

When British business consultant Maya Forstater was fired for referring to a man as a man, women, and women’s organizations who had been previously silent, came out of the woodwork to support her.

When some Labour party leadership candidates signed a pledge to expel members who did not accept that transwomen (male transgender persons) are literally women, thousands of women challenged them to #expelme, many of them signing on to the Labour women’s declaration.

When a male transgender prisoner, housed in a woman’s prison, was discovered to have raped female inmates, women’s organizations fought for a review of policy,leading to the establishment of a separate transgender wing within the prison.

Cracks are appearing in the transgender children narrative too. If Ichilov aspires to be the Israeli counterpart of Tavistock, which houses the only children’s gender identity service in the UK, they would do well to proceed with caution. Thirty-five clinicians have resigned from Tavistock’s gender identity service over the past 3 years, and they are now facing their first lawsuit by a former patient, now a young adult who regrets having been transitioned.

We in Israel emulate the West a good deal. But we shouldn’t be rushing headfirst to emulate a shaky and unproven path. Instead of trying to hide dissenting voices, we should be engaging in full coverage of both the good, the bad and the ugly. Let the discussion roll.