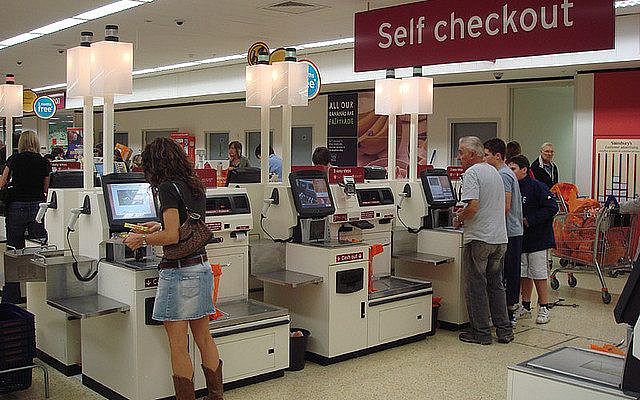 Trigo, an Israeli company, has created a touchless grocery store checkout system that is designed to be more eco-friendly and help reduce the amount of time it takes for customers to pay for their groceries.

The system uses sensors that detect when a customer puts items on the belt and automatically charges them as they go through the line. In addition to being faster than traditional checkouts, this system also helps prevent theft by eliminating cashier interaction with customers. This innovative technology is now being introduced in stores throughout Israel and Europe.

Meanwhile, mega-retailer Amazon is trying out a different technology (with the same goal) in the Whole Foods grocery chain it recently bought for $13 billion. Will Trigo be able to trifle with the giant? Let’s talk about it.

The technology is designed to be more eco-friendly and help reduce the amount of time it takes for customers to pay for their groceries, both aspects that customers will definitely appreciate. With the rise of online shopping, mobile pay technology and grocery services such as Amazon Fresh, time is money for retailers like Trigo.

The system uses sensors that detect when a customer puts items on the belt and automatically charges them as they go through the line, allowing shoppers to walk out quickly without having to wait in line or interact with another human being (such as at self-checkout machines).

In addition to being faster than traditional checkouts, this system also helps prevent theft by eliminating cashier interaction with customers. This innovative technology is now being introduced in stores throughout Israel and Europe; although it’s only been tested so far, there have already been talks about bringing it into Walmart locations worldwide.

The Origins of Trigo

Trigo was founded in 2017 by former executives at machine vision company Cognex. The idea came to them when they realized that grocery shopping was still very much reliant on antiquated technology, despite the fact that self-checkout kiosks had become common in many stores already.

The technology Trigo uses is similar to the systems employed in self-checkout machines, but Trigo says their system is more reliable. The sensors are designed to work even when there’s a basket or bag on top of them (which can interfere with the sensor at self-checkout).

Trigo hopes that by reducing time spent waiting in line and increasing convenience for shoppers, it will be able to gain market share from Amazon – just like any grocery chain would hope to do against the pending rollout of Amazon Fresh.

Amazon is Trying the Same Technology in Whole Foods – Will It Work?

The idea behind Amazon’s pilot program appears to be similar to Trigo’s: speed up checkout time and reduce labor costs by eliminating cashier interaction with customers while increasing security at self-checkout kiosks.

However, there are some important differences between how these two technologies function that could make all of the difference when it comes down to who wins or loses this battle for retail supremacy. For now, though, let’s dive into what makes each system unique.

Self-Checkout vs Trigo – How Are They Different?

Trigo uses sensors that detect when a customer puts items on the belt and automatically charges them as they go through the line, which sounds similar to self-checkout machines. However, there are some key differences between how these two systems work.

For one thing, Amazon’s pilot program appears to be using existing technology for its sensor system rather than developing new tech like Trigo has done. Furthermore, Amazon does not seem to have any plans at this time to bring cashier-less checkout into Whole Foods stores or other locations beyond their pilot test in Seattle (at least according to reports).

Trigo is an Israeli startup aiming to revolutionize the way consumers pay for their groceries by introducing a new touchless checkout system designed to speed up payment while also minimizing environmental impact and theft of produce from store shelves.

To accomplish this more quickly than traditional methods, Trigo relies upon sensors built into its checkouts which detect shoppers’ items as they place them onto conveyor belts — once detected, customers are automatically charged for their items as they pass through the line.

It’s All in the Technology

While some have compared it to Amazon Go, an upcoming cashier-less grocery chain set to open later this year, the difference here is that Trigo doesn’t require additional infrastructure beyond new store equipment — making it easier for retailers already running traditional checkouts to upgrade sooner without having to overhaul existing processes.

In addition, Amazon’s system appears to be using off-the-shelf sensors instead of creating new ones as Trigo has done. While the former may result in lower costs for retailers at first glance, it also means that they will have less control over their checkout process and what information is being collected from customers — a big concern when dealing with sensitive data such as bank account details, health records, and more.

While we’re still in the early stages of the cashier-less checkout war, expect the battles to start coming fast and furious. Rumors are flying that Trigo is in the process of encroaching on Amazon’s home field and is in negotiations with multiple US grocery retailers.

Amazon appears close behind having already successfully tested their automated checkout process in Seattle and planning a pilot test for one Whole Foods location later this year; however, if rumors are true there could still be time before these systems go head-to-head on existing storefronts. There will also likely continue to be some major differences between the two systems as Trigo looks to capitalize on its head start.

Fasten your seatbelts, folks, this could get interesting.