One major theme that hard-core anti-Semitic anti-Zionists employ, from Christians to Muslims to Neturei Karta and from Communists to Progressives and to Conservatives, is that Zionism somehow is either Nazi in character or, at the very least, cooperates with Nazism.  It also fit in with Holocaust Denial.

Lenni Brenner did it.  Ken Livingston did it recently. Neturei Karta do it. Other weirdos do it.

And now we have Anshel Pfeffer of Haaretz who has published in support of this thesis of his:

The left wing of the Zionist movement negotiated the “Transfer Agreement” with Nazi Germany in the early 1930s, and helped the Third Reich evade a worldwide Jewish boycott. The Revisionists attacked the agreement, but a few years later reached a deal for military training and arms from the anti-Semitic Polish government, which was interested in getting as many Jews as possible to leave Poland.

Poland, anti-Semitic Poland, was not Nazi Poland even as we know its citizens killed many tens of thousands of Jews during the Holocaust, and from way before.

Members of Betar fought anti-Semites, most famously at the 1936 pogrom (memorialized in S’brent) in Przytyk (See some testimony here and this: “March 9th 1936 was market day and the Jews set up their stalls in the main square as they did every market day. After a while, Polish hooligans showed up and overturned their stalls – which forced the stall owners to collect their merchandise as quickly as possible and lock up their shops. Members of the Jewish youth movements – the Mizrachi, the communists, Betar, Poaley Zion and the Bund – had been training to defend the Jews in precisely such situations. Chaim’s brother Nachum was one of the commanders of Betar and he took his troops to do their duty. Skirmishes quickly developed and at a certain point, one of the Jewish youths, Laski, shot one of the Poles. The hooligans retreated, not before they had murdered the Minkowskis. Several Jewish youth were apprehended and indicted; eventually 7 or 8 were found guilty and sentenced to various terms in prison.”)

The local Betar leaders who participated in the self-defense action [pgs. 558-559] were Yitzchak Friedman who was sentenced to 5 years imprisonment and Eliezer Kirschentzweig who received jail time of 6 years.

And here is a typical recollection, from Ostrolenska: 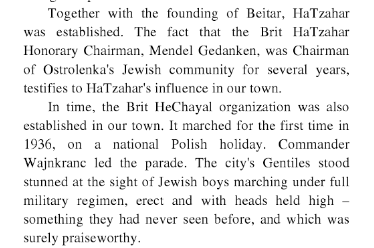 These are some pics of Betarim in military training in Poland: 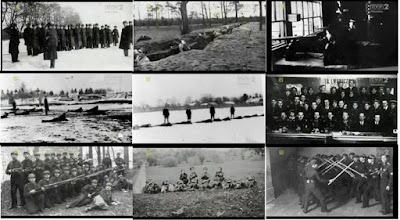 Using one’s ability to obtain crucial and sympathetic assistance from a regime, even one anti-Semitic, to further one’s national goals, incidentally shared by that regime, to return to the national homeland after years in Exile subject to the whims of Jew-haters, is a worthy political act.

Pfeffer’s juxtaposition of that with his other examples and with his overall theme is not only a pitiful attempt to besmirch other Jews but, ironically, providing aid and comfort to anti-Semitic anti-Zionists!!

If he wanted to employ Betar as an example, he should be calling on American Jewry to train and organize in self-defense units, in cooperation with local authorities or independently.