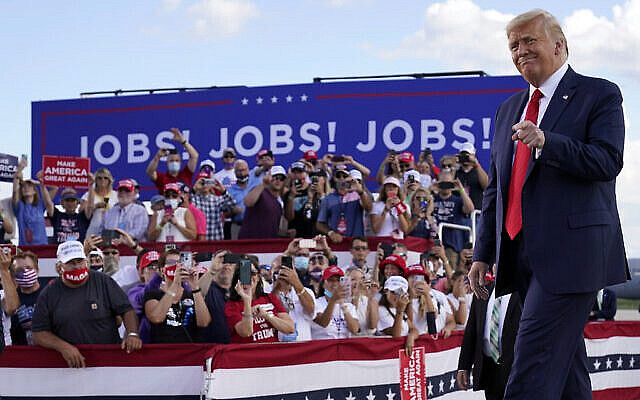 OK. I am as sick as anyone else of the election-cycle live and twitter screeds President Trump and his minions serve up to his supporters. But this daughter of Holocaust survivors cannot shut up in the wake of Trump’s statement regarding his having moved Israel’s “capital” [sic] to Jerusalem “for the evangelicals.”

I find what he went on to say even more significant: “The evangelicals are even more excited about that than Jewish people.” This dog-whistles that Jews are ungrateful. As if to say, “G-d forbid some of my anti-Semitic supporters find the red meat embodied in my statement on the ‘capital’ to be under done and send it back to the kitchen – let’s also call Jews ingrates.”

I won’t shut up, when on the same day, Trump’s staunch ally and advisor Rudy Giuliani said on Fox News, “[Holocaust survivor George] Soros is intent on destroying our government for some sick reason of his that goes back to his sick background.” The same Rudy Giuliani who said last year, “I’m more of a Jew than Soros is. I probably know more about – he doesn’t go to church, he doesn’t go to religion – synagogue.”

I particularly won’t shut up about statements made on this historical date because of my own “sick background.” You see, on August 17, 1938 Nazis required Jewish women to add the name Sarah and men to add the name Israel to their own on all legal documents including passports. And I have to stand and say Kaddish for Sarah and Israel Spiegel z”l, the toddlers born to my grandparents, Salomon and Rosa Spiegel z”l, hoping and praying that those are their real names – not additions to my grandparents documents to signal to all and sundry that these “Jewish people” are different.

Make no mistake. Trump and Giuliani and many Trump supporters are likewise signaling to their evangelical base that they consider Jewish people different – somehow less grateful for a move of Israel’s “capital” that never took place. Jerusalem has always been Israel’s capital – Trump only moved the embassy. They are signaling that Trump is counting on people who do “go to church” – do “go to religion” – to win in November.

That means I know a few things about how anti-Semitism plays out in the long run. I have genetic memory of pharaohs in Egypt and czars in Russia. I know that Trump is not only signaling to his evangelical base that he is unhappy with Jewish “recalcitrance,” but is also signaling to his Jewish supporters – and particularly those in Florida – that they had better show how grateful they are, if they wish to garner the future benevolence of the future president of the United States. I know and by now even Sheldon and Miriam Adelson seem to know that Jews shuckeling, jiving and paying off a benevolent master willing to feed red meat to an anti-Semitic base does not guarantee a bright future.

I know about the aftermath of the Holocaust, and I know about public health. I wrote on the eve of Israeli elections on February 23, 2020, when the global pandemic was still a twinkle in COVID19’s eye “Vote!!!! Like your life depends on it.” I am begging you again now at the height of a global pandemic in which the US is losing the battle against coronavirus. Vote!!! In US elections. Like your life and our life and the lives of 7.8 billion people around the world depend on it.