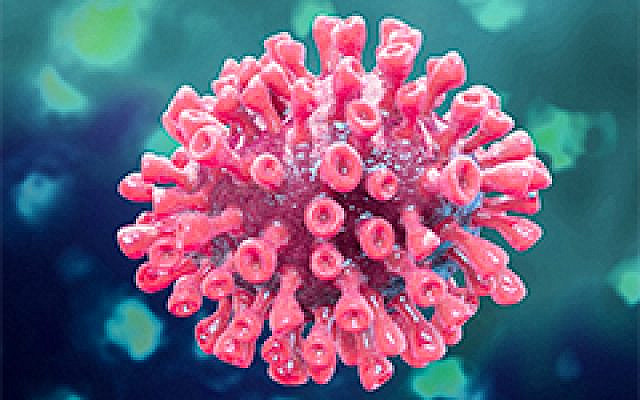 Because of my background in public health (Bedouin Mobile Unit, Maternal-Child Health Director of the Israel Health Ministry Jerusalem Region, Public Health Nursing instructor, etc.), people have been asking me every day since this nightmare began whether I’m scared of coronavirus.

My simple not-so-simple answer: No and yes.

Full disclosure: I don’t know very much about coronavirus. Anyone who tells you they know much about coronavirus is lying. I have avoided saying much publicly about this until now. But terrifying headlines like the one in Israel Hayom this morning — reading, “Corona is in Israel” — have caused me to tell you what I and others think. The headlines reflect the revelation last night that nine South Korean nationals who visited Israel in February have tested positive for the novel coronavirus COVID-19.

Israel’s health care system, led by Prime Minister Benjamin Netanyahu and/or Yaakov Litzman during the previous decade, is in a state of collapse. The crowding in Israel’s hospitals, relatively short hospital stays, and lack of medical and paramedical personnel is legendary. A 2019 study by Prof. Dov Chernichovsky and Roi Kfir examining Israel’s hospital system notes that the number of hospital beds per 1,000 people is 2.2 versus 3.6 in the OECD (36 nation-member Organisation for Economic Co-operation and Development). The decline in hospital beds is particularly steep in Israel — a 22 percent decline versus an OECD average of 15% between 2002 and 2017. Now the ministry is threatening to commandeer major hospitals in Tel Aviv and Jerusalem. Where do they intend to put the Israelis who are already sleeping in the corridors because of a lack of beds in such hospitals?

We are currently facing the third election in a year. The non-government making decisions on the fly is not empowered to make major budgetary decisions like purchasing the quarantine equipment, lab tests, vaccines, etc. Much of the above typically comes to us from China, a nation that may be saving those commodities for itself or for other countries that actually have a government that will out-bid us.

Our (deputy) health minister is a member of the ultra-Orthodox United Torah Judaism party. Some reports maintain that state-funding for his constituents who are yeshiva students and their families is expected to run out in June, 2020. He may not be motivated to allocate funding to more expensive measures to contain Corona in Israel.

That scenario puts — as we Israelis say — my heart in my underpants.

The Israel Health Ministry led by Yaakov Litzman is — for good and/or ill — erring on the side of exceptional caution in the current coronavirus epidemic. That may derive from fear that the disease can spread faster in a country the size of New Jersey. But the ministry’s demand last week that Israelis returning from Thailand, Singapore, Hong Kong, and Macau — self-quarantine at home was unprecedented in other countries. The ministry’s announcement that it would employ Israel’s Shin Bet security services and a hotline permitting neighbors to “squeal” on one another to enforce this self-quarantine raised eyebrows here and around the world.

The nine infected South Korean tourists were members of a group of 77 South Koreans on a trip to Israel. They visited sites throughout the country, potentially passing the disease to hundreds if not thousands of Israelis. Their contact with school groups has prompted the Israel Health Ministry to order that some 200 students and their teachers self-quarantine at home – although there is reason to believe that the risk of dying of coronavirus is very low (less than 1%) in middle school students and even in young teachers in their 20s – 40s.

Israel Foreign Ministry Spokesman Gilad Cohen told Channel 12 morning news anchor Niv Raskin last week that there could be political and economic repercussions to Litzman’s internationally unprecedented orders to Israelis returning from Hong Kong, Thailand, Singapore, and Macau. Other nations may not appreciate measures which no other nation has imposed, and this is no time to point xenophobic fingers at the South Koreans or any other foreign nationals. International collaboration is vital in containing this potential pandemic. Measures like refusing entry to non-Israeli citizens on a Korean Air flight that landed at Ben-Gurion last night may soon cause xenophobic and anti-Semitic fingers to be pointed at us.

Add to that Israel Hayom’s headline about Corona in Israel today, when Corona was imported to Israel by the Health Ministry last week in its (in my opinion, justified) airlift to Israel of Israelis on the Diamond Princess cruise ship docked in Japan.

Let’s talk about the self-quarantine for one brief moment. I have said and written again and again that this is not just the Start-Up nation — it’s the DIY nation. If you want something done in Israel you have to do it yourself. The self-quarantine has befuddled and anxious Israelis recalling the orders that they protect themselves from biological warfare in the Gulf Ware by “sealing” their windows with masking tape and plastic wrap.

Israelis Avi Peretz and Clara Tahor told Raskin that they only discovered upon arriving from Thailand at Ben-Gurion Airport last week that the Health Ministry required that they remain quarantined in their homes for 14 days. Protesting the lack of earlier notification by SMS, Peretz said, “This isn’t a quarantine…I’m walking around here [the airport] freely and I’m taking a train to Hadera…I have to buy stuff at the grocery store, the shuk…Who will see to it that I get food?”

Tahor asked, “What about parents of little children who have to be with them after they’ve left them behind for two weeks? My son left his three kids with his mother-in-law. Now he has to come and get them.” He wondered — as I imagine many Israelis have and will — how are we to take this many days off work and how are our workplaces — including vital healthcare facilities, first responders and the IDF — to get along without us?

Peretz noted that the Thai government measured air travelers’ temperatures at the airport by means of a Thermoscan and provided disinfectants with which they could wash their hands, while such measures were not installed at Ben-Gurion Airport. Nor did the Health Ministry provide massive screening in the form of lab testing. The Health Ministry failed to employ those simple measures, yet it has signaled that it may soon go so far as to close its borders to non-Israeli citizens.

The Israeli public is in a cold sweat. The Magen David Adom hotline is already lit up like a Hannuka bush; and though only one eighth-grade class in the Be’er Sheva middle school came in contact with the South Korean tourists, only 50 students in the school of more than 500 showed up for school this morning. The panic is understandable, and can be explained by brain science and psychology, as Max Fisher explained in the New York Times, “Coronavirus ‘Hits All the Hot Buttons’ for How We Misjudge Risk.” I have nothing but compassion for my compatriot Nervous Nellies.

Yet, there are many reasons for optimism, and no cause for the ministry or social or other media to whip the public into a frenzy of panic:

“But are you scared?” you insist. “Yes,” I say. “I’m not scared of coronavirus. But I am scared of Yaakov Litzman.”

The take-home message: Don’t be scared. Vote!!!! Like your life depends on it.