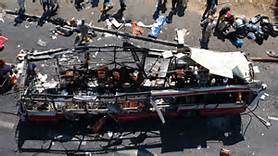 Jews were among those protesting at American airports against the Trump administration ban on visitors from terror-related Middle East countries.

Travel bans against Jews, specifically Israeli Jews, to Muslim countries continues on a daily basis without a murmur of protest from the American Jewish community or even from Israeli Jews. It is accepted as something normal that Jewish Israeli passport holders are blocked from entering Algeria, Bangladesh, Brunei, Iran, Iraq, Kuwait, Lebanon, Libya, Malaysia, Oman, Pakistan, Saudi Arabia, Sudan, Syria, United Arab Emirates and Yemen.

The discrimination does not end there. Israeli Jews are prevented from participating in international sporting competitions in these and other Muslim countries. But it gets worse, and more relevant to the US administration travel ban on visitors from terror-promoting regimes. They must seriously consider adding the Palestinians to their blacklist of terror-supporting regimes.

Remember the Olympic Games outrage when Palestinian terrorists targeted the Israeli team in Munich in 1972.

Forty-five years later, Jibril Rajoub, a leading candidate to replace Mahmoud Abbas as head of the Palestinian Authority, chairs both the Palestinian Football Association and their Olympic Committee. He campaigns relentlessly to have Israel expelled from FIFA, the world governing body of football, even as he publicly promotes terrorism.

Rajoub said of Palestinian terrorists who murdered Israelis; “We in the Fatah movement bless and encourage them. We consider them heroes and a crown on the head of every Palestinian.”

Welcoming Sep Blatter, President of FIFA, on a visit to the region in 2013 Rajoub said that the youth believes in “the noble values and humane message of sports which can bridge the gaps between peoples.” But when Blatter had left the area he said on official Palestinian TV, “I say there will never be normalization in sports. We will see no Jews, no Satans and no Zionist sons of bitches.”

Under his patronage there have been numerous sports competitions named in the honor of Palestinian terrorists that have killed Israelis. Yet he remains the head of the Palestinian Football Association and attends FIFA conferences with an agenda to kick Israel out of international soccer.

If the aim of the Trump Administration’s entry ban is to stop the infiltration of potential terrorists into America they have to include Palestinians in their extreme vetting program.

This is not only based on decades of relentless terror attacks against America’s strongest ally in the Middle East. It is also based on a long record of Palestinian terrorism against prominent Americans at home and abroad.

Sirhan Sirhan who murdered US Attorney-General Robert Kennedy in 1968 was a Palestinian.

Yasser Arafat ordered the murder the kidnapping and murder of the US Ambassador and his deputy in Khartoum, Sudan, in 1973.

Arafat ordered the kidnapping, torture and execution of William Buckley, the CIA station chief in Beirut, by Palestinian Islamic Jihad in 1984.

In 1985, after Yasser Arafat officially renounced terror as a Palestinian tactic, four members of the Palestine Liberation Front threw Leon Klinghoffer, an elderly handicapped American Jew, and his wheelchair off the Achille Lauro cruise ship they had hijacked on the high seas.

In other words, the Palestinians can get away with the murder of Americans and Jews because, diplomatically, they are untouchable.

They can even get away with being allowed access into the United States despite their gruesome and patently obvious connection with terror and the fact that Palestinian Hamas is designated as a terrorist organization.

The Taylor Force Act, named after a US army vet who was stabbed to death by a Palestinian terrorist in Tel Aviv last year was introduced to seek to cut off funding to the PA if they continued paying monthly salaries to terrorists.

Mahmoud Abbas boasted that of the $440 Million he receives from the US $46 Million is allocated to support terrorists who, as a result of American pressure, were released from Israeli prisons.

Last month, a PLO minister, Zakariya Al-Agha, told a crowd that the PA has given five hundred and fifty million shekels ($145 Million) to the families of terrorists killed during the 2014 Hamas war on Israel.

Despite austerity measures taken by the PA due to the decrease in foreign aid their payments in salaries to terrorists will be increased by 3.1% in their 2017 budget.

Now they are threatening more violence should the US move their embassy to Jerusalem.

The Palestinian commitment to terror only increases. With their embassy threats, they constitute a clear and present danger to the United States as a Trump Administration looks to renew America’s ties to its only genuine ally in the Middle East.

That is why they must be added to the US terror ban.

Barry Shaw is the Senior Associate for Public Diplomacy at the Israel Institute for Strategic Studies. He is the author of the book, Fighting Hamas, BDS and Anti-Semitism.