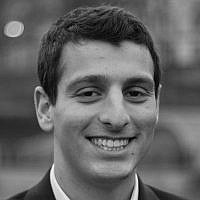 The Blogs
Ethan Wolf
Founder and Executive Director of Jewish Unity PAC
Apply for a Blog
Advertisement
Please note that the posts on The Blogs are contributed by third parties. The opinions, facts and any media content in them are presented solely by the authors, and neither The Times of Israel nor its partners assume any responsibility for them. Please contact us in case of abuse. In case of abuse,
Report this post. 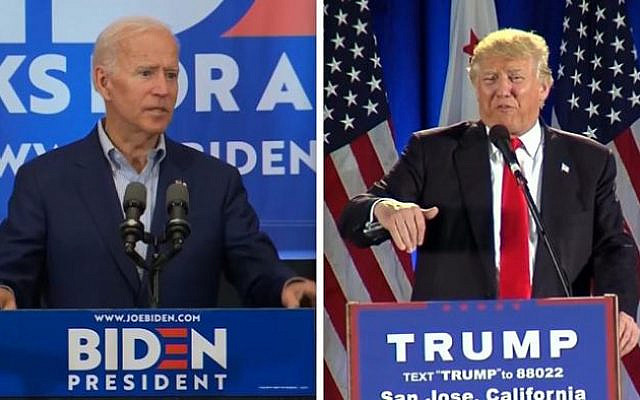 Biden (left) and Trump (Right) spar over differing perspectives on Israel and the Middle East Source:https://static.timesofisrael.com/blogs/uploads/2020/05/Capture5826.jpeg

The rain continues to fall onto the grass outside my house near Chicago, Illinois. The sky is dark despite it being mid-morning. As the sky growls with a sharp crack, I am reminded that our darkest days are followed by our brightest moments. When this rain inevitably stops, a beautiful rainbow radiating an array of colors will shine. President Trump, however, cannot see that beauty because he is color-blind, living in a world he believes to be black and white, devoid of nuance.

Yet that is not the case. The world is full of nuance. This is especially true with an issue as complex as Israel. It is therefore imperative our Commander in Chief understands the full array of intricacies related to Israel. Only then can he push for long-term prosperity and peace.

President Trump’s failure to understand those intricacies has significantly hindered attempts to create sustainable peace in the Middle East. Trump’s decision to move the United States embassy from Tel Aviv to Jerusalem, while symbolic, served no strategic purpose. It only emboldened anti-Israel activists in their quest to discredit the Jewish State. The morning after the embassy was moved, armed conflict between Palestinian protestors and Israeli Security forces erupted ultimately resulting in one death and injuring 35 others.

President Trump’s so-called “Deal of the Century” showed further evidence of Trump’s inability to understand nuance when seeking peace in the Middle East. It was a deal without any legitimate substance, political or otherwise. The Trump Administration’s hard-line—and not to mention, factually and politically erroneous—stance on Israeli politics rendered the deal dead on arrival. The “Deal of the Century,” like most things associated with President Trump, was in and of itself a farce. The “Deal of the Century” significantly hindered the United States’ ability to negotiate peace in the Middle East. Just yesterday, Mahmoud Abbas declared all agreements with the U.S. and Israel, including vital security agreements, null and void. With the United States’ credibility as a deal-maker diminished, long-term peace seems more far-fetched than any time in recent history. In both cases, President Trump’s hawkish and short-sighted actions threatened the future possibility of a two-state solution. Instead, the Trump Administration’s actions stoked the flames of anti-Israeli activists and deepened fragmentation amongst those involved in the conflict. As the lightning strikes, Mahmoud Abbas once again appears on the news. Large booms of thunder followed by violent strikes of lightning ensue around me. Things get louder. It’s more difficult to hear both the other side and my own thoughts. We are forced, yet again, into the echo chambers from whence we came.

Vice President Biden, however, has always understood the nuances facing the Middle East, and particularly those concerning Israel. He has remained committed to supporting a two-state solution that will ensure the long term security of the Jewish and democratic state. Upon meeting Benjamin Netanyahu in the early 2000s, he said, “Bibi, I don’t agree with a damn thing you had to say, but I love you.” Despite differences, Biden never let these political disagreements steer him away from being a staunch supporter of the state of Israel. Rather than airing his grievances on Twitter in the middle of the night, negotiating through seemingly unhinged “letters” to foreign dignitaries, or governing by social media proclamation, Biden has gone on the record about his tactics for dealing with foreign leaders stating, behind closed doors, and with respect. This is how friends and allies operate. They share their dissatisfaction with certain policies and then move forward despite any differences. More concretely, Tony Blinken, former Deputy National Security Advisor during the Obama Biden Administration, stated in an interview with the Democratic Majority for Israel (DMFI), “He (Biden) would not tie military assistance to Israel to any political decisions that it makes.” Biden also played a strong role in helping Israel secure its largest military and financial aid package in its history. Crucial elements of the aid package included the development of the Iron Dome and David’s Sling. Both projects were key to keeping Israeli citizens safe from rocket fire. Through understanding the nuances and complexities of the region, Joe Biden is in the best position to help Israel shine today and for the foreseeable future.

America’s darkest hours have always been followed by its brightest moments. Trump’s color-blind and anti-factual foreign diplomacy in Israel has caused its fair share of violent storms. Even still, the clouds are now dissipating. The sun is starting to poke out  revealing a beautiful rainbow filled with color. There is only one problem. The rainbow is not seen by President Trump. He doesn’t understand the nuance —the thousands of years of history and struggle—that inform Israeli politics, and the Middle East more broadly. It’s about time we get someone in the White House who does.