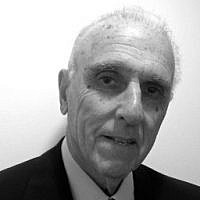 The Blogs
Robert K. Lifton
Apply for a Blog
Please note that the posts on The Blogs are contributed by third parties. The opinions, facts and any media content in them are presented solely by the authors, and neither The Times of Israel nor its partners assume any responsibility for them. Please contact us in case of abuse. In case of abuse,
Report this post.

Watching the televised portions of the meeting of President Trump with Israeli Prime Minister Netanyahu brought to mind the story of the businessman who having done a service for the head of the French Rothschild family was asked what he wanted in return. “Just walk through the Paris bourse with your arm around me,” he replied. When Trump and Netanyahu walked into the White House with arms entwined around each other’s backs the message was clear to all the interested constituencies – the Israeli public, the American public and American Jewish community and the Arab and other worlds that “Bibi” was Trump’s buddy and nothing was going to come between them.

At the press conference after their meeting, with Netanyahu chuckling on the side, the President spelled out his approach to make what he had previously called the “ultimate deal” between Israel and the Palestinians. “I’m looking at a two-state and one-state, and I like the one that both parties like.”… “I can live with either one.” He then added: “I thought for a while the two-state looked like it may be the easier of the two. But honestly, if Bibi and if the Palestinians – if Israel and the Palestinians are happy, I’m happy with the one they like the best.” And all he asked of Netanyahu was to “hold back” on building settlements “for a little bit” pending peace talks.

Of course, all these ruminations sent waves of anxiety through those who hoped the President would underscore the long held American support for a two-state solution to the conflict and the consistent recognition by earlier American presidents that settlement expansion was detrimental to any peace process. As a result, we have seen any number of articles expressing that frustration and the hope that Mr. Trump did not really mean what he said or that he would change his mind when he understood the situation better.

Two thoughts came to my mind as I watched the meeting on television and read the ensuing articles. First, is that Mr. Trump does indeed fully understand the implications of what he said. As the world is learning, Mr. Trump’s approach to issues is “transactional.” It doesn’t really matter what the particular deal is; so long as he can point to the fact that he made a deal. He knows that for any deal there will be people for and people against it. He will describe that deal as having “enormous” value,” “better than any other deal” and take credit for it in public pronouncements with the applause of those who support it. So, the truth is that it doesn’t really matter to him, as he said, whether the “ultimate deal” involves one state or two states.

My second thought is that what Mr. Trump or anyone else says about the Israel-Palestinian conflict does not really control the developing events and determine the outcome. The reality is that there is only one set of circumstances in which a deal will be made. The Israeli public must broadly favor the deal and press their political leaders to seek it. Then, Israel’s political leaders must put the Palestinian leaders in a position where they cannot avoid making a deal. Let’s look at these two requirements.

I have spent many hours of meetings with heads of Arab states and other senior officials explaining that Israel is a true democracy where the public will decide to make peace with the Palestinians only if the Israelis deem it of value and feel secure enough with the outcome. To help create such an environment, I recommended that those Arab leaders reach out to the Israelis directly, bypassing their elected officials, and send a clear message that they are welcome in the Middle East and will be fully accepted on political, business and social levels. Some Arab leaders, like the late Hafez al-Assad of Syria frankly told us that they could not do that without the risk of being killed like the Egyptian leader Anwar Sadat, who made the Camp David peace deal with Israel. By contrast, one leader – then Crown Prince Abdullah (later King) of Saudi Arabia – took that message to heart and created the Arab Peace Initiative. But the API was too restrictive in its terms and not properly marketed directly to the Israeli public to do the job. Now, there is another opportunity to bring together the Sunni Arab nations with their distrust of Iran, which they hold in common with Israel, to create a coalition for a peace process. Mr. Trump may be able to provide the impetus to this approach.

Even with acceptance from the Arab states, however, the Israeli public must further be convinced by Israel’s own security experts that a two-state deal with the Palestinians will not create undue security risks to Israel. As I have written before, the Commanders for Israel’s Security (CIS), a group of some 250 retired Israel Defense Force generals, heads of Mossad and Shin Bet and police commissioners has been carrying out that role.

Once the Israeli leaders, prodded by the public, agree to undertake a peace process, they, together with the Arab leaders, the United States and other nations who have supported Palestinian independence must prevail on the Palestinians leaders to enter serious negotiations with Israel for a two state resolution of the conflict. In the past, Palestinian leaders such as Yasser Arafat and Mahmoud Abbas have been unwilling to take the personal physical risks required to make a deal by accepting the sine qua non of any deal that Jerusalem must be recognized as the capital of Israel, (while it may also be the capital of a Palestinian state) and that the “right of return” of Palestinians to their original homes cannot be part of the deal (although there may be some compensations.) Palestinians leaders must get enough support and inducements for the Palestinian people in the deal to overcome those hurdles.

To accomplish this, the role of the United States becomes clear. Washington cannot dictate to the Israeli government. It cannot force Israeli action through the UN. It can only be helpful by explaining to the Israeli public why the peace process is in Israel’s interest and why the US is committed to it, and in bringing together the Sunni Arab states to support it. The American Jewish Community already understands that the Israelis are very little influenced by our views. What we can and should do is encourage our government to be helpful to this project where requested by Israel and in every way possible aid the CIS to carry out its program in Israel.

At the end of the day, I am convinced that the Israeli public is too smart to take on the enormous social, economic, security and political burdens of a “one state” solution – incorporating millions of Palestinians in a bi-national state. So, if President Trump has any hope for making the “ultimate deal,” it will have to be a “two-state” deal and he is going to find that it requires a huge amount of time, effort and commitment by him and his son-in-law Jared Kushner, whom he has designated to broker the peace deal. It remains to be seen whether they are prepared to make that kind of commitment, which is many times more difficult than just talking about it at a White House meeting.

About the Author
Robert K. Lifton, a board member of the Israel Policy Forum, was president of the American Jewish Congress, a founder and president of Israel Policy Forum, and co-chair of the Middle East Project of the Council on Foreign Relations. His memoirs, titled “An Entrepreneur’s Journey: Stories From A Life In Business And Personal Diplomacy,” have been published by AuthorHouse.
Related Topics
Related Posts
Comments