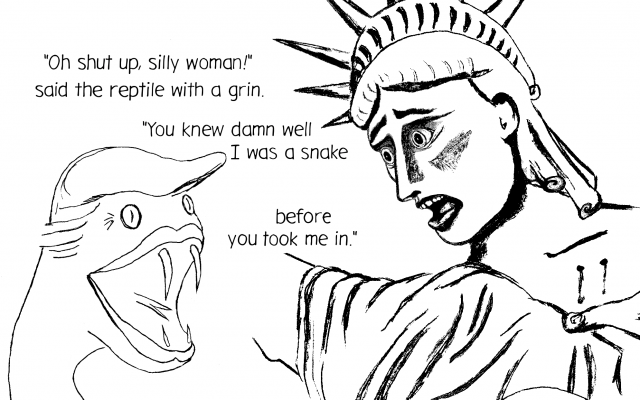 D Seidenberg, detail, "Give Me.", used with permission, see full cartoon at: https://blogs.timesofisrael.com/no-lives-matter/

Nothing happening at this very moment in the United States capitol should be surprising. At no point has Trump suggested there could be any limits. Need we be reminded, this is still the man who bragged that he could shoot someone in broad daylight and get away with it?

Yet each new escalation still gives me a shock, and gives us a shock. Protesters breaking windows in the capitol building couldn’t be more predictable, yet the sight is still overwhelming. Invasion of the Senate and House chambers, invasion of Pelosi’s office.

You know Trump is watching the same thing on his TV – and doing nothing else related to actually governing – gloating and preening. Does anyone believe he is having any second thoughts about the consequences of his words?

Just this morning we saw the triumph of democracy over liars and grifters in the Georgia Senate races and those who supported them. (Rachmana lits’lan, that even includes Rabbi Avi Weiss, who was spreading rechilut, accusations of anti-Semitism, against Raphael Warnock just two days ago.)

Ages ago, which is to say three days ago, we heard Trump trying to subvert election officials in Georgia. And he said something strange to Ryan Germany, the lawyer for the office of Georgia’s Secretary of State.

What does Trump mean when he says to Ryan Germany, “You have a nice last name”? I am afraid to put forward the obvious speculation, but at the same time I can hardly resist thinking it. Very little is stopping this man from fully reaching his fascist potential.

And yet, perhaps we need all this to unfold. We need to see the fullest expression of this insanity, short of an actual coup, in order to rid ourselves of this scourge.

So again, I am praying with renewed force, as I did before and after the election:

Tear out tyranny and despotism,
Ruin those who cheat and deceive,
Upend those who oppress the vulnerable.
Make the reign of the arrogant disappear from the land, and
Pulverize the plans of those who attack democracy.
Obstruct them, humble them, and bring on their downfall, soon, in our days.

May it be fulfilled. May the Republican politicians supporting lies about the election have their strength turned against them. May they be uprooted alongside Trump. (And may the same prayers redound upon the authoritarians in Hong Kong and everywhere.)

The tradition says that prayers are among the strongest weapons we possess. Use them!

Full cartoon image can be seen on TOI here.