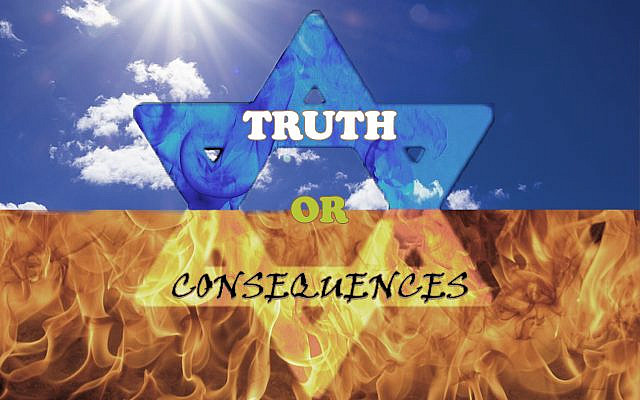 For millennia, Jews have been the bloodied victims of untrue, vitriolic accusations. This painful history includes falsities of deicide, well poisoning, blood libel, dual loyalty, being either a communist or a capitalist, and Israeli apartheid. Hitler’s “big lie” fueled the Holocaust.

History should teach us that where truthfulness is in short supply and replaced with willful mendacity, Jews often suffer. Now evidence shows that Jews again are in jeopardy because of deteriorating standards of reason and truthfulness.

On a global level, the United Nations, chocked full of dictatorships and Islamic countries, is a fount of anti-Israel bias. It has been a malign platform subjecting the only Jewish state, Israel, to a belligerent, hypocritical double standard with overwhelming percentages of negative resolutions. In 2021, 77% of the General Assembly votes condemning a country were directed at Israel.

In the United States, Jews have prospered, and they have felt safe. Certainly, they were much better off than their European brethren. Support for Israel remains relatively high, but more recently, Jews face a steep rise in hate incidents. and real blood is being shed. College campuses have become battlegrounds. Jewish students and supporters of Israel are attacked verbally and physically. Recent insidious trends of woke-ism, intersectionality, and critical race theory (CRT) are driven by the media 24/7, validated in academia, and are expressed by “The Squad” in Congress.

Sadly, major Jewish organizations, philanthropic and religious, compromise their mandates by supporting partisan politics and woke propositions instead of protecting their constituency.

–The Anti-Defamation League (ADL), now led by Jonathan Greenblatt, a Clinton-Obama operative, has shifted focus from tracking and countering antisemitism to advocating for woke principles. Jonathan Tobin’s JNS article of September 7, “After the ADL gets caught spreading woke ideology, Greenblatt must go” documents the hijacking of the ADL with its “No Place for Hate” program. ADL supports CRT, the Antisemitic “Women’s March,” Americans paying reparations to ancestors of those enslaved, and “Black Lives Matter” that validated antisemitic attacks on Israel. ADL reveals its political partisanship with full-throated attacks on the Republican far right. Correspondingly, it conveniently downplays the threats from left-wing antisemites who are entrenched in academia, star in popular culture and are at home in the left-wing of the Democratic Party.

–How many High Holidays sermons focused on climate change, the border crisis or some other tikkun olam social justice topic? Of course, these are important, and Jews should participate in the debate and repair. Afterall, Hillel counseled, “…if I am only for myself, who am I?” But let’s demand at least equal time allocated to the plight of Jews around the world. Let’s press our spiritual leaders to educate, to advocate and to not overlook the complexities of issues that plague Israel and Jews.

All around us is proof that truth is hard to come by. Antisemitism experts like Raphael Medoff and Ruth Wisse have critiqued the recent Ken Burns documentary, The U.S. and the Holocaust. While raising awareness about the Holocaust was valuable, the effort to excuse Democrat President Roosevelt was subtly managed and the conflated parallels with our border immigration mess was manipulative.

Truth or Consequences, back in the 1940s was a popular NBC radio show hosted by Ralph Edwards, and later was a long running TV program featuring Bob Barker. The contestant either answered the question properly (truthfully) or was required to perform some goofy stunt.

Compared to entertaining game shows, consequences of allowing our culture to glibly twist the truth are far more dangerous. The consequences of Jews not demanding courageous leaders, will be harsh and existentially threatening. We rely on …and financially support…Jewish organizations. They must resist affiliations with any organization that equivocates in its steadfast support for Israel and the Jewish people.

A Hebrew proverb states that “The world rests on three things: truth, justice, and peace.” It is hard not to evoke Rabbi Hillel’s guidance: “If I am not for myself, who will be for me?” Speak up and demand that our leaders remember truthfulness is a basic Jewish value.

About the Author
Alan Newman is a life-long supporter of the Jewish community and Israel. His commitment is evident with his hands-on approach and leadership positions at AIPAC, StandWithUs, Ben-Gurion University, Ethiopian National Project and Federation’s JCRC. He has traveled to Israel almost two dozen times and is an enthusiastic supporter of pro-Israel Christians including critical organizations like CUFI, ICEJ, USIEA and Genesis 123 Foundation. Alan’s compelling novel, GOOD HEART, published by Gefen Publishing House, is a multi-generational story about a Christian and Jewish family. He was a senior executive at Citigroup and holds two US Patents. He lives with his wife in West Palm Beach and enjoys time with his two sons and their families.
Related Topics
Related Posts