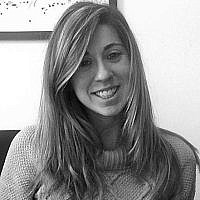 The Blogs
Nava Brief-Fried
Apply for a Blog
Please note that the posts on The Blogs are contributed by third parties. The opinions, facts and any media content in them are presented solely by the authors, and neither The Times of Israel nor its partners assume any responsibility for them. Please contact us in case of abuse. In case of abuse,
Report this post.

Things are only complicated if we complicate them. Something inside pushed me to make it as simple as possible.

The first time I received an email from a customer in Abu Dabi, was the time I hoped that it wouldn’t be the last. Strange how things can work. She’s sitting in her home somewhere in Abu Dabi browsing the world wide web, choosing items, and adding them to her shopping cart.

In real life if this was to happen, her full shopping cart would be rolling through a fashion mall in Israel, or I would have to be standing somewhere in Abu Dabi. Impossible.

The email stated that we received a pretty large order, (a couple hundred dollars) for modest fashion goods.

After a few phone calls, some research on google, and a quick chat with a friend, I realized that there is no way she’d ever be able to receive her package from us.

I emailed her explaining the problem, by telling her that some of the items she ordered are being shipped from Israel, and hoping for the best.

About 5 minutes later, she responded with a very simple request, and asked me to try and send it through the post office in Beit Lechem.

I promise I tried, but I didn’t get very far.

The fact that we were able to create a secure environment online where both she and I can relate to fashion, shop the same styles, and both be part of the diverse community of women we are building, is a huge accomplishment.

As for her order, I didn’t give up on it. After all I, am a young entrepreneur- sales don’t come easy, and when they do we hold on to them. Tight. I ended up sending the package to her relatives in the UK.

Nava is the founder of ModLi.co the first and only modest fashion marketplace for boutiques to sell their modest fashion items to women around the world. Some of our most popular items include: modest swimwear, skirts, dresses & more!