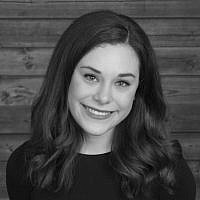 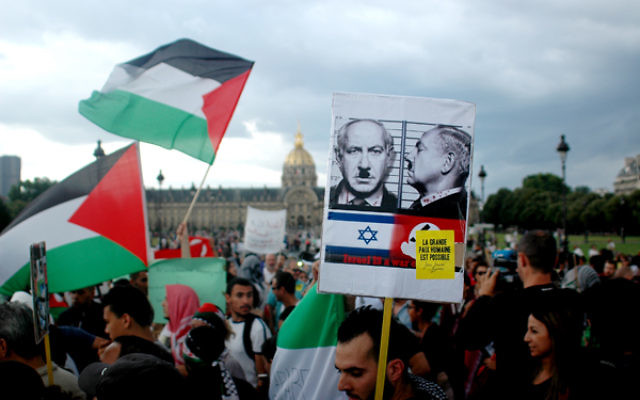 Protesters wave Palestinian flags and hold placards during a pro-Palestinian demonstration in Paris, France, on August 2, 2014. Israel bombarded Gaza on Saturdayafter accusing Hamas of destroying a humanitarian ceasefire by capturing a soldier whom the Islamists say was probably killed in Israeli shelling. (Photo by Alain Apaydin/ABACAPRESS.COM via Jewish News)

Antonio Morera Antunes, the artist whose antisemitic caricature was published in the New York Times in April, had produced such grotesque images before: a cartoon from 1983, which pictured Israelis dressed as Nazis, with Magen David’s in place of the swastika, pointing their guns at victims reminiscent of the Jewish people, though dressed in the Palestinian keffiyeh.

Both cartoons were appalling, but the latter in particular struck a chord. It reminded me of the pervasiveness of the Holocaust references that are used to describe the State of Israel.

It seems obvious to me that Israel, a Jewish state, should not be compared to the Nazis, who sought the termination of the Jewish people.

However, it is apparent that numerous pro-Palestinian commentators and political figures disagree.

Rashida Tlaib, for example, made the provocative claim that remembering the Holocaust has a ‘calming’ effect on her, as she thinks about the losses that her ancestors bore ‘to create a safe haven for Jews’.

The statement is insidious.

It implies that the Holocaust was purposeful in order to enable the State of Israel, a dangerous misconception that denies the extent of the oppression that the Jews underwent, while also ignoring the historical facts regarding the arrival of the Jewish people to the Ottoman Empire and the British Mandate of Palestine in the decades preceding World War II, with the first five waves of Aliyot.

Furthermore, Tlaib’s statement is not just ignorant, but also insensitive in the best light.

A larger question seems to belie its tactless agenda: is there a real lack of care about Israel and the Holocaust, and does this reveal a similar lack of care towards the Jewish people and their traumatic experiences?

Why is antisemitism acceptable when it’s under the guise of anti-Zionism?

I noticed that Tlaib did not mention the Grand Mufti of Palestine collaborating with Hitler, or the Hebron massacre in 1929, in which 67 – 69 immigrant Jews were murdered.

Is this part of the memories that her calming feelings stem from?

The invocation of the Holocaust, with the explicit desire compare Nazism to the State of Israel, is cruel.

It distorts and undermines remembrance of the Holocaust, while also adding to an environment where Diaspora Jews are made to feel unsafe.

The rejection of the IHRA definition in a UCL Students’ Union members’ meeting in January is a bitter example of this, as its dismissal compromised the welfare of Jewish students in order to further establish the Union’s continued condemnation of Israel.

In contrast, the Students’ Union did not protest Miko Peled featuring at a Friends of Palestine event in November 2017, even though he had said that ‘Zionists should be treated like Nazis’.

This is antithetical to intersectional activism, as it refuses to acknowledge the persecution and victimisation of the Jews and instead accords it to the plight of the Palestinian people. Along with perpetuating vicious narratives about the Jews, this also does a disservice both the Jewish and the Palestinian people, as it denies them their own real traumas and experiences.

The gross minimisation of the Jews during the Holocaust is proliferating.

In Warsaw on May 11th, far-right protesters and Polish nationalists marched against the United States Senate’s 447 bill, which would see the support of the restitution of former Jewish properties.

The government, likewise, sees Poland as more deserving of reparations, as Polish Prime Minister Mateusz Morawiecki said that ‘we will not allow any damages to be paid to anyone because it is us who should get damages’, according to PAP.

Furthermore, this debate over restitution has led to an increase in antisemitism and anti-Zionism among the far-right parties and grassroots activists, as seen with the protest. This is again an example of the Holocaust being used to further political agendas with complete disregard for its Jewish victims.

Why do the lives of the Jewish people matter less? When solutions are discussed – one state, two state, or otherwise – it is rare that the nine million people living in Israel are considered.

Where will these people go? What will they do? Will they still be considered Israeli?

Not all of Israel’s population are Jewish either – but would pundits and politicians care more if the percentage of Jewish citizens in Israel was smaller? How can the cultural, national, and economic displacement of these nine million people continued to be discussed with such blasé consideration?

In times like these, it is hard not to perceive that these issues are used as mere talking points for politicians and causes for activist students.

Cartoons like Antunes’ run rampant. It is crucial that we treat each of them with the same deserved disgust that Antunes’ received, and for the right reasons.