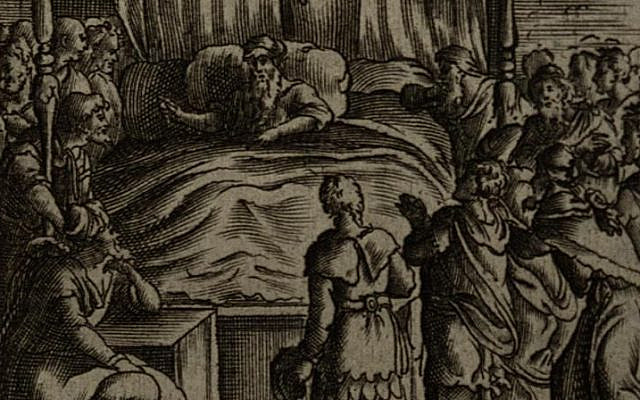 The rabbis who compiled the ancient Midrash must have struggled with Jacob’s blessing to his sons. Before he died Jacob called together all his sons, who by now were grown men with children and grandchildren of their own. He gave each of them what we euphemistically refer to as a blessing. Euphemistically, because two of the sons, Shimon and Levi, received such a rebuke they would have been better off had their father said nothing to them at all, as indeed he seems to have done with his only daughter, Dinah.

The problem that the rabbis may have struggled with was that, although Jacob had twelve sons, we know nothing at all about half of them, apart from their names. How does one interpret a blessing made to someone of whom we know nothing? The Torah concentrates on just two of Jacob’s sons, Judah and Joseph, throws in a few unflattering asides about the oldest, Reuben, constructs a story around Benjamin without telling us anything about his personality and describes in great detail the violent deed committed by Shimon and Levi. As for the other six, all we hear is that they are born, and that Jacob blesses them.

It was easy enough for the rabbis to interpret Jacob’s blessings to the sons that we know about; they just linked the blessing to the relvant Torah narrative. As for those sons of whom we know very little or nothing, they looked in later books of the Bible to find personalities descended from them. Each of Jacob’s sons is the ancestor of a tribe bearing their name, so the rabbis were able to connect stories about later biblical heroes to the blessing that Jacob gave to their tribal progenitor. But the technique didn’t always work. Some of Jacob’s sons were not only unremarkable during their lives, they also spawned no heroic descendants to feature in the later books of the Bible.

Naftali was one such son. Born to Jacob’s concubine Zilpah, he hardly features anywhere in the Bible. But when blessing him, Jacob describes him as a ‘gazelle sent forth, who brings fine words’. The rabbis were forced to fall back on their imagination to explain what Jacob meant.

Casting Naftali in the role of a speedy messenger, ‘a gazelle sent forth’, they constructed an imaginary scene that took place at Jacob’s burial. His sons have arrived with their father’s coffin at the family’s tomb in Hebron, at the Cave of Machpelah, only to find their uncle Esau, their father’s brother waiting for them there. Esau claims that as the elder brother, he and not Jacob has the right to be buried in the cave. Immediately Naftali is despatched to Egypt to collect Jacob’s title deed to the plot. He speeds off, as fast as a gazelle, and returns, almost in the blink of an eye, bearing the deed, the ‘fine words’ in Jacob’s blessing.  But he is not quite fast enough.  His brother Dan’s son Husham, who is deaf and hasn’t heard that Naftali was sent to Egypt, takes umbrage at what Esau is doing. He attacks and decapitates him. Esau’s head rolls onto Jacob’s bier, the two brothers look at each other and realise that their mother’s self-imposed curse has come true: “why should I be bereaved of you both on the same day?” (Gen 27,45).

So much for the rabbinic imagination. But the interpreters still have a problem. Biblical interpretation is not a sterile activity, it is intended to relate in some way to the contemporary world. Jacob’s sons are the ancestors of Israel’s tribes and his blessing of them must therefore relate in some way to Israel’s future history. But the tribes disappeared nearly a thousand years before the time the rabbis composed their Midrashic commentaries; with the exception of the Levites who retained a liturgical role, no Jew in the rabbinic world was aware of their tribal ancestry, any more than they are today. So the rabbis still faced the problem of how to give Jacob’s blessings of the tribes a contemporary relevance.

They looked at the verse which follows Jacob’s blessing: “This is what their father said as he blessed them, each according to his blessing he blessed them.” They saw that it repeated the words ‘blessed’ and ‘blessing’ unnecessarily.  This means, they declared, that each of them received the blessing of all the others. Rather than delivering twelve distinct blessings, Jacob united his sons into a common destiny, each son benefitting from all the blessings delivered to each of his brothers. The blessing may have been declared in twelve stages, but it was one collective blessing, applicable to all. Jacob was unifying, not dividing, his sons.

By the rabbinic period, the early centuries of the common era, the Jewish nation was no longer a coalition of quarrelsome biblical tribes. The early rabbis were astute enough to recognise that the only way their people could survive as a nation in the contemporary world, the only way they could endure the economic deprivation and the rigours of the Roman occupation of their land, was as a unified entity. Jacob may have blessed twelve tribes. But he had one nation in mind as he did so.