Twenty-Five years ago, together with tens of thousands of Israelis from all walks of life, I was honoured to attend the funeral of Menachem Begin on the Mount of Olives. (Begin asked to be buried next to Meir Feinstein and Moshe Barazani, two heroes of the pre-state anti-British underground, who chose to blow themselves up in their Jerusalem prison cell, after singing “Adon Olam,” rather than be hanged by the British.) All were gathered to honour a man who had been a recluse for the previous decade, but who had impacted Israeli society for decades before that, culminating in the “upheaval “ of his electoral victory in 1977 when he ended almost three decades of left-of-centre domination of Israeli politics. Even though he asked for no eulogies, the sheer scale of the turnout was witness to the admiration of the people and state of Israel.   Who was this man who attracted such a multitude from across Israeli society to his final journey in Jerusalem? 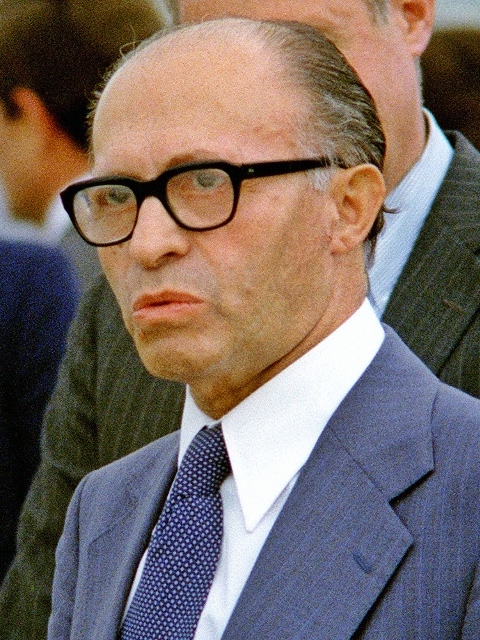 Israeli Prime Minister Menachem Begin delivers an address upon his arrival in the US for a state visit in 1978.  Photo (C) Wikimedia

In honour of the centenary of Menachem Begin’s birth Daniel Gordis released a highly readable biography, based on meticulous research, titled: “Menachem Begin: The Battle for Israel’s Soul” (Schocken: 2014). I was privileged to attend a presentation he gave on his book. He opened by informing the audience that the original title he wanted to give his book was the title of this review “Menachem Begin, Israel’s Jewish Prime Minister.” He then proceeded to deliver a fascinating analysis on why Begin was, in his words, “Israel’s most Jewish Prime Minister.”

Gordis explained that Begin plotted his life on a biblical map and that he helped restore the “Jewish” to Israeli identity. He saw the renewal of the State of Israel as the continuation of the biblical story. This coloured his views and decisions during the entire period of his public life, as well as his personal life. Gordis writes that:

It was a life of great loyalty — to the people into which he was born, to the woman he loved from the moment he met her and to the State that he helped create.”

Many biblical allusions and biblical language were an integral part of his life. This belief led him to have certainties. One was NEVER to divide Jerusalem. According to Gordis’s research, David Rubinger’s (who passed away this week, aged 92) iconic photograph of Rabbi Goren blowing the shofar at the Western Wall after its liberation in 1967 was the result of Begin’s idea.   Begin realised the Jews returning to the Temple Mount was an event of biblical magnitude. Just as Joshua blew the shofar as the Jews entered the land to take possession under his leadership over three millennia ago, so too should the Jews blow the shofar when they complete the circle of return, one of humankind’s least likely and most epic scenarios.

Another certainty in his life was that the modern Amalek was Germany.   He viewed the following biblical verse quite literally:

When the Lord your God gives you rest from all the enemies around you in the land he is giving you to possess as an inheritance, you shall blot out the name of Amalek from under heaven. Do not forget!”

He was dead set against reparations. The more pragmatic Ben Gurion, despite recognising the emotional issue surrounding the issue of reparations from Germany, realised that the nascent State desperately needed the economic benefits a massive infusion of cash and goods would provide. Begin asked Ben Gurion during an extremely heated debate in the Knesset, “how much money are you getting for every dead Jew?” There was almost a civil war in the State’s early years over the issues of German reparations. Begin was ejected from the Knesset and lead protest marches of thousands. It was a case of emotional (Begin) vs. rational (Ben Gurion). Anita Shapira, one of Israel’s preeminent historians, said that it was impossible to exaggerate the animosity between Begin and Ben Gurion.

Above all Begin saw himself as an emissary for his people. He did not even take the million dollars that came with the Nobel Peace Prize he received for helping facilitate the peace with Egypt. His family lived in a one bedroom flat on Rosenbaum street in Tel Aviv the entire time he was in the opposition, a period of almost three decades. After he left office, his friends had to buy him a flat, as he did not own any property.

One of his last public appearances was at the Kahane Commission. He was a broken man after the death of his beloved wife Aliza and having being mislead by Sharon over the Lebanon War. This occasion also marked the end of his public life. When asked his name, he replied in a very Jewish/Biblical manner: “Menachem ben Ze’ev v Chasia Begin.”

His belief that the renewal of the Jewish State was the continuation of the biblical story coloured all of his decisions, from not wanting to accept reparations, to granting asylum to the Vietnamese boat people as his first act in office, to ordering the bombing of the Osirak nuclear reactor in Iraq, to prevent a potential second Holocaust. Begin famously observed:

Not by the right of might have we returned to the land of our forefathers but we have returned by the might of right.”