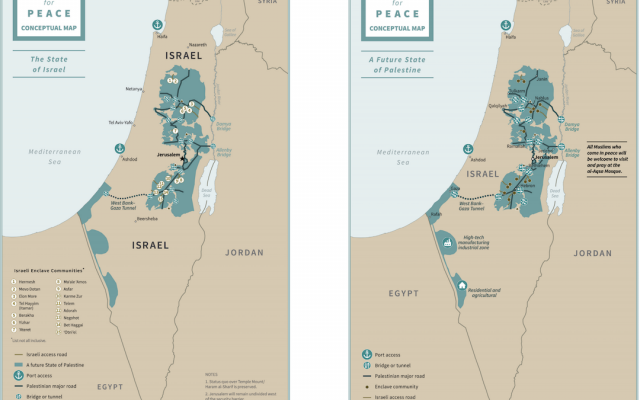 Israel and Palestine according to Trump

For years the Two State Solution has accompanied us as the self evident answer to all the problems related to two different peoples living together in the same area. Split the area into two states and yes, many of our problems if not all, will be resolved. On the other hand it may have never occurred to anyone to look at the Two State Solution as the original cause of our problems, the one shtick which keeps setting the land on fire and prevents all of us of having closure. Maybe, after all,  two states are not our destiny?

When the Peel commission delivered its verdict in 1937 there were indeed good reasons to separate the warring factions while the British Mandate was still running high. Just like there were good reasons in 1947, when the last serious effort was made. The latter was made already by the UN which failed just like the previous British proposal, thus putting the Palestinians on the road to misery and Israel on the track to the Start-Up Nation. If the 1967 war and its dramatic outcome were an opportunity to resolve issues between the parties, you’d never guess by the way both sides responded. Since then there has been a continuous if intermittent effort to split the land and share the resources, well-meaning no doubt, revisionist in thought, always back to the future, never really looking ahead.

And the bottom line? As much as the Palestinians want their own state, they don’t really want to give up anything of substance that could entice Israel to give up its control over the West Bank. Nor did they ever come up with a proposal of their own that would take Israel more than one minute to reject. And who knows? Looking at how our Arab neighbours fare and how the Palestinian Authority governs, many may secretly prefer to stay put, within Israel’s sovereignty, unpleasant and painful as it may be. And Israel? As much as Israel would like to dump the Palestinians in their own state far away with a big wall in between, we are much too enamored with the beautiful ancestral lands of Judea and Samaria and much too concerned with our security to seriously consider withdrawing from the Jordan River and appropriate a sizeable and contiguous area for a viable Palestinian state.

The Trump-Netanyahu plan has sealed the fate of the Two State solution. By putting the border along the Jordan River and leaving Palestine imprisoned inside an enlarged Israel, literally gobbled up, it created a One State reality. Implementation of new building plans in and around Jerusalem makes it irreversible.  There will not be an independent Palestinian state. That train has left the station. Mark my words. If the Trump proposal has done anything, it has shown to everyone that Two States are history. Look at the map. Look at it again. Those Bantustan islands connected with strings of roads, tunnels and bridges, if they even are, do not a viable state make. And really, does anyone seriously believe that the Palestinians are ever going to meet the requirements that Israel and the US will insist on before graciously granting the them, maybe, some Lilliputian statehood? This whole plan is an exercise in going through the motions so everyone can see what an amazing effort the US has made. Hell no, this is not the launch of the ultimate Two State Solution, but rather its funeral. And those who designed it know it well enough.

We are in a One State reality, now all we really have to do now is to decide – do we want an apartheid state, an occupation on steroids or can we do better than that, a lot better?? Do we want to create a situation where we will continually have to keep a large minority in check, subdued or do we want equality in a state where everyone will be safe? I know, this takes a leap of faith but do we really need to start the wrong way and wait until the world and our fellow Jews in the diaspora force  us to correct our ways when reality comes knocking? Do we really have to make the same mistakes that other ethnocentric nation states have made in the past and we Jews, have suffered from and eventually even paid an enormous price ? Are we really so blind and cannot see where this is going? Has ethnocentricity ever done good in a multinational environment?

I should think the answers are obvious although I suspect there are many among us who would never consider or at least feel very concerned about giving up a Jewish Nation State even though that definitely was not what Israel’s Declaration of Independence called.  Nevertheless all those who think a Jewish Nation State or bust, will face a bust, sooner or later. It’s only a question of time and magnitude. And history won’t look at us kindly if we prove to all and everyone that we have learned nothing from our own.

About the Author
The author served in the Prime Minister’s Office as a member of the intelligence community, is a member of the Council for Peace and Security and was a candidate in Labor’s 2012 primary election for the Knesset list
Related Topics
Related Posts
Comments