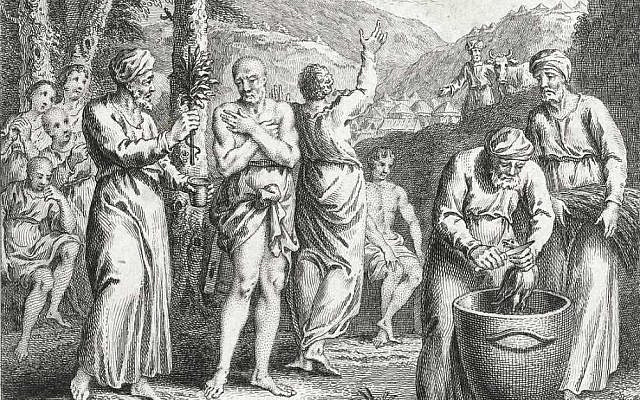 Why does tzaraat only have a diagnosis and treatment but not a definitive cause?

As a physician, disease is the primary focus. The priorities of medicine, in order of ideal, is the prevention, treatment and mitigation of disease.  When we cannot prevent a disease entirely then we seek to cure it; if unable to cure, then we aspire to reduce its morbidity. Tzaraat is a curious oddity in the Torah, providing details only for the purposes of disease management. Despite paragraphs devoted to the diagnosis and treatment of the disease, the Torah conspicuously ignores the pathology’s etiology. Faced with the specter of such an important disease process, it is understandable that adherents of the Torah would feel vulnerable and perpetually anxious lacking a means of prevention.

The modern medical community is of the consensus that tzaraat, often erroneously identified as leprosy (Hansen’s Disease), is in fact not a medical phenomenon, rather a religious malady (1-3). The contemporary orthodox understanding is that lashon hara, speaking ill of others, is the cause, often citing the incident of Miriam as pathognomonic (Bamidbar 12:1-10 and Devarim 24:9). Yet, biblical and rabbinic sources alike bring significant doubt to this explanation. For example, an opinion in the Talmud suggests that tzaraat is a consequence of diet and hygiene (Ketubbot 77b) lacking any connection to sin. However, overall the Torah and rabbinic sources are quite clear that tzaraat is a consequence of sin (Bamidbar 12:14, Midrash Pinchas Yair), however lacking the specifics of lashon hara.

The rabbis were very aware of the ambiguity around the cause for tzaraat. To that end, there were many who penned their own list of causes ranging in number between 8 and 14 iniquities to be avoided lest one contract tzaraat. Yet again, the only commonality amongst these lists is the lack of uniformity as there is no common single sin amongst them all: Arachin 16a, Midrash Tanchuma Metzora siman 4, Bamidbar Rabba Naso 7:5, Vayikra Rabba Metzora 16:1 and 17:3, Devarim Rabba Ki Teitze 6:8, and Midrash Pinchas ben Yair.

Despite our colloquial confidence, it is quite clear that our ancestors did not share our assurance of the cause of tzaraat. Perhaps this is because our appreciation of tzaraat is dominated by its empirical manifestation as a physical disease instead of how it was intended; a spiritual experience. Despite many early opinions sharing our contemporary misconception, there were some who had a more sophisticated understanding. Viewing tzaraat as a means to an end, rather than an end unto itself.

This approach is hinted at in a few places within rabbinic thought. Brachot 5b argues that tzaraat is a means to acquire atonement. From this perspective the complexity of diagnosing and treating tzaraat acquires a different meaning. Each type of tzaraat with its various procedures and social and material consequences is designed to elicit a particular effect upon the afflicted. Midrash Tanchuma (Metzora siman 4), Devarim Rabba (Ki Teitze 6:8) and Midrash Pinchas ben Yair argue that each type of tzaraat reflects the severity of sin and its necessary retribution as a means to correct for the fundamental defect that brought that person to sin. The particular sin is irrelevant as it is merely the symptom of the true cause; a failure of character.

Essentially, suffering from tzaraat is dependent on the individual, not the sin. This simple distinction has been lost to our collective understanding and results in more than simply the anachronistic association to actual physical disease and the fixation on a particular sin to avoid. It fosters our misunderstanding of the biblical text itself. If one assumes that tzaraat is sin dependent, then they must reconcile how two people guilty of the same sin could have different punishments. Specifically, when Miriam and Aharon speak lashon hara about Moshe, only Miriam is afflicted with tzaraat (Bamidbar 12:10). This compels ample midrashic apologetics to explain how in fact Aharon did receive tzaraat (Shabbat 97a). However, this problem is irrelevant when one understands that in fact tzaraat is independent of sin but dependent on the sinner.

All sin must be punished middah k’neged middah, balancing proportionality of sin with recompense. Miriam was critical of Moshe’s status, comparing herself and Aharon to Moshe’s prophetic caliber (Bamidbar 12:2). She was rebuked for her hubris (12:8) and punished with tzaraat, forcing her out of the camp. Physically separated from the camp and position she held herself to be so equally essential so as to be comparable to its true core, Moshe. Furthermore, she had shared her arrogance with Aharon in private but was forced to endure public exile while the entire nation was delayed awaiting her retribution (12:14-16).

In comparison to Miriam, while certainly guilty of lashon hara as a willing recipient, Aharon is passive and silent. What might appear as a mitigating factor, is in reality the seal of his guilt. Aharon is plagued by passivity or silence. The entirety of his early biblical presence is as the passive mouthpiece of Moshe.  Aharon fails to respond to the mob at Har Sinai and is passively inclined to the mob’s wishes to build the egel hazahav (Shemot 32:1-4). When his sons are killed he accepts their fate without a word (Vayikra 10:3). While not sins per se, passive obedience must be carefully cultivated as unrefined it can become complicity. When Miriam speaks with Aharon, he is the Kohen Gadol. The representative of the nation to the divine. A role that requires him to reliably distinguish when silence is not an option. Yet, now as his sister speaks ill of his brother, Aharon stands silently, passively acquiescing to her claims of their righteous equivalence.

Aharon’s punishment is poetic in its simplicity. Miriam is punished with tzaraat, a disease which requires the diagnosis and management of a Kohen to be cured (Vayikra 13:2-3). Yet, as a direct family member, Aharon cannot serve that role. In fact, there are no extant Kohanim to satisfy the vacancy, condemning his beloved sister to suffer indefinitely. Whereas before Aharon was silent when he should have used his power to speak up, now he must speak up as he admits his impotence to care for his sister whom he allowed into harm’s way and beg the superior man to intercede on her behalf (12:9-11).

Tzaraat is not a punishment for a particular sin, but one of many tools available to rectify man’s foibles.

1)  “…it becomes apparent that the description of tzaraat differs from our present understanding of Hansen’s disease and may not be similar to any well-known dermatologic disease.” (p131). “The Bible, as a code of religious law, may not be describing one particular disease, but rather is defining a state of ritual impurity seen in several diseases.” (p134)

2) “Ptolemy II, 250 bc, demanded the translation of the Hebrew Bible into Greek … It appears that the scholars of the Septuagint knew about these repeated references to white spots in Greek medicine and were influenced by the frequent references to white spots also in the Pentateuch. Added to whiteness was scaling and so we have lepra.” (p746-748)

3) “…A Greek equivalent to zara’at did not exist. Therefore the translators had to rely on the prevailing medical knowledge in Greece. At the time, Greeks referred to white spots or white sickness as leprosy. The translators probably believed that the whiteness of the skin and hair as described in the Old Testament was similar to the disease that was known as leprosy. Mycobacterial leprosy or Hansen’s disease was known to the Greeks during this period and they called it elephantiasis graecorum.”  (p508-509).

“When the Arabic texts were translated into Latin in the ninth century, elephantiasis graecorum was called lepra graecorum. This second mistranslation is credited with the introduction of the term leprosy for Hansen’s disease that has persisted to the present day…” (p509)