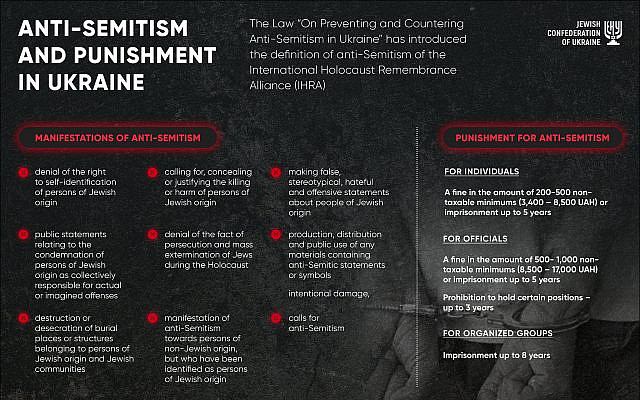 Picture by Jewish Confederation of Ukraine
The law “On Preventing and Countering Anti-Semitism” adopted by the Verkhovna Rada has brought Ukraine significantly closer to Europe and the civilized world.
The definition of anti-Semitism contained in the law is fully consistent with the wording recognized by 31 member countries of the International Holocaust Remembrance Alliance (IHRA): “Anti-Semitism is a certain perception of Jews, which may be expressed as hatred toward Jews. Rhetorical and physical manifestations of anti-Semitism are directed toward Jewish or non-Jewish individuals and/or their property, toward Jewish community institutions and religious facilities.”
The Jewish Confederation of Ukraine has been advocating the adoption of this definition for many years, since it will help to fight anti-Semitism consciously and in harmony with the whole world. Together with the Ministry of Internal Affairs, JCU has been conducting joint monitoring of manifestations of anti-Semitism for a long time, and the Ministry of Internal Affairs promptly responds to all cases of physical or online anti-Semitism. However, for an effective fight against these manifestations, the legal component was missing.
Many speakers at the Kyiv Jewish Forum spoke about the need for Ukraine to adopt an international definition of anti-Semitism. A real tool has appeared now for combating a phenomenon that has a much broader meaning than hatred toward Jews. Especially important is the adoption of this law on the eve of the 80th anniversary of the Babyn Yar tragedy, in which, according to various estimates, more than 150,000 people were killed – not only Jews, but also Ukrainians, Roma and representatives of other ethnic nationalities.