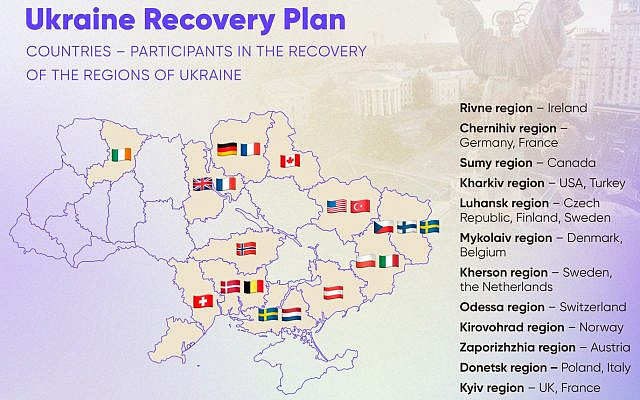 Picture by Jewish Confederation of Ukraine
The Ukraine Recovery Plan presented at the Ukraine Recovery Conference in Lugano is often compared to the historic Marshall Plan. They really have a lot in common, including the name.
The official name of the Marshall Plan was the European Recovery Program. Only one country, the United States, acted as a donor for 17 European countries under that program. $13 billion was allocated then to recover the economies destroyed during the war (in terms of current purchasing power it equals to $157 billion) during four years, from 1948 to 1952.
Ukraine Recovery Plan is planned for 10 years and involves attracting $750 billion. At the same time, only one country is a recipient, and there will be dozens of donors. This can be judged by the composition of the participants of the conference in Lugano: there are about 40 countries and 20 international organizations.
The result of the implementation of this plan should be an annual GDP growth of at least 7%, Ukraine’s entry into the TOP-25 world economies by 2032, and most importantly, which is still impossible to calculate, the multiplier effect of the investments made, which can significantly accelerate and increase these indicators.
The fact that Ukraine Recovery Plan is primarily a plan to attract investments, and not just a borrowing program, is its main advantage. Foreign partners, who not only show solidarity with Ukraine fighting in the war, but also consider it as a truly profitable investment, also understand this. The number of countries that have applied for the recovery of the destroyed regions is an eloquent confirmation of the interest of investors.