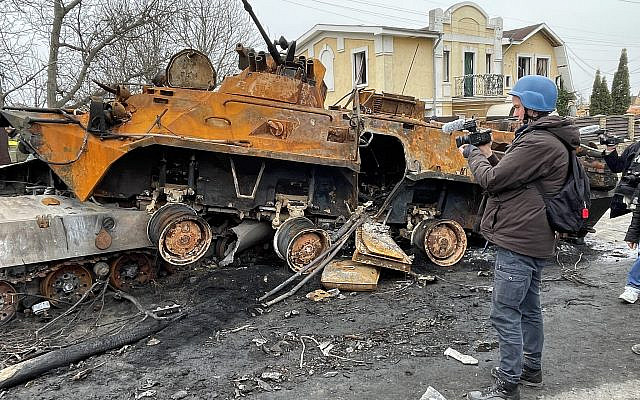 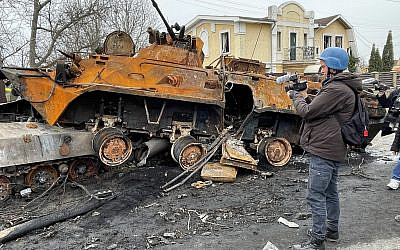 The United Nations Human Rights Commission issued a statement in the last several weeks noting: “The commission’s work could ultimately contribute to the work of international criminal court prosecutors who could bring charges over war crimes in Ukraine, although it remains uncertain whether Russia or other alleged perpetrators would ever face justice.”  In here lies the challenge for the world.  How do we capture the actions, challenges, and impacts of war.  As an American and an observer of world politics and culture, the war in Ukraine has far reaching impacts well beyond the country’s borders. Many around the world have been able to watch the war play out because of social media, and since we can read and see everything in real time—the images we see are raw. Uncensored. Real.  The photographs are a pivotal tool to capture the truth, elicit support, and most of all – useful in someday holding those accountable for their crimes.

For this moment in time, this art, this photojournalism, is helping spread awareness and share stories from the frontlines of the war and the civilians caught in the crossfire. We are given a window into a world that is thousands of miles away from us. The images elicit an intense emotional response, which is why the Ukraine war remains in the forefront of our minds even with the saturated news cycle. With social media being visually oriented, powerful photographs can go a long way in reminding us about what is happening in the world, even when it’s far away.

Nonetheless, it is a war that has been remarkably captured. Publications like the Washington Post have a running database of the videos being created for social media by the lost, the forgotten, the tormented.  News media have captured and published not just the moments that are most impactful but everything as it is happening.

Unlike paintings and other artistic mediums, photography captures an instance and provides an exact and authentic impression of a moment. We see the world through the eyes of the photojournalist, and the photo tells a story all on its own. Photojournalism, as an art and form of journalism, is held to an incredibly high standard. The photos taken are unedited, unstaged, and uncontrolled. And though Russia attempts to call these photos of the war in Ukraine “fake”, the whole world knows just how real these images are. This is an evil that cannot be imagined, let alone made up or staged.

Brave photographers have documented everything and aren’t shying away from showing how abhorrent and cruel Russia has been. The photography of Ukrainian Evgeniy Maloletka, in particular, candidly portrays Russia’s brutality through his capture of the Russian siege of Mariupol, his most viral being a picture of a pregnant woman after the bombing of a maternity hospital. The photo depicts a young woman on a stretcher in front of a burning hospital peppered with bullet holes and shattered windows. The woman, clutching her pregnant belly, reportedly died after delivering her lifeless baby. This image, horrific and striking, is cemented in my head. When I think about what is happening in Ukraine, I don’t just think of a distant war fought between two militaries—but a mother who lost her life and child.

War photojournalists risk their lives and witness unimaginable atrocities. Mstislav Chernov, who also photographed the siege, shares that he and Maloletka were the only international journalists left covering the siege, and that the Russians had their names on a list and were searching for them. Their role in Ukraine’s resistance is invaluable. Because of their bravery, the whole world is able to witness and learn of  the tragedies that would have otherwise gone unheard, unseen.

The photos from Chernov, Maloletka, and others, though horrific and traumatizing, showcase the reality of war and its long lasting implications. War is not a means towards freedom. It is not a beacon of hope. It is a violence that only fuels more suffering. And these photographs display this truth. As the war continues and we see Russia encroaching on the Ukraine emergency power of the Zaporizhzhya nuclear plant, there will only be more photographs to come that will reveal the scope of Russia’s cruelty.

The extent of photo, video, and social media go far beyond mere documentations of violence but also of the political corruption of Russia as well. As votes to annex Ukraine came in, videos and photos showed armed Russian soldiers going door-to-door in Ukraine to collect ballots. Through these images, we can easily see why the results were implausible. Every day, the world is witnessing more and more of Russia’s crimes.

These images of the war give us a closeness to the war that is extremely difficult to ignore and stomach. These pictures document evidence of Russia’s crimes and brutality against Ukraine and its people. And though Russia attempts to change the narrative about their invasion of Ukraine, the images will preserve what really happened. Through the publishing and sharing  of these photographs online we have a comprehensive archive that will become critical evidence against Russia.  The stories captured in the photographs, the stories people are telling, the videos captured on social media, will not allow Russia to get away with the atrocities they’ve performed against Ukraine.  The stories of the resilience and resistance of Ukrainian people will remain with us through these photos and will serve as visual testimonies of what they experienced. Pictures speak a thousand words—and thanks to the bravery of the photographers—we’re able to see these stories for ourselves.

About the Author
Annette Blum is a member of the Synergos Global Activists Circle, the Artists and Educators Board at Center Theater Group, The Milken Global Cenference, the former Clinton Global Initiative and Religions for Peace among others. Recent projects include education, arts and social activism with international venues across the globe. She collaborates annually with the Jerusalem Season of Culture in Israel promoting coexistence and tolerance and with prominent arts institutions in New York and international conferences in Europe and The Middle East.
Related Topics
Related Posts