Reporter will be buried swiftly without autopsy

Never an investigation yielded results so fast. This is the fastest result any investigation could give. While pro-Muslim-Palestinian sources screamed murder, the PA forbid an independent autopsy. I know enough.

BTW: To say that the PA concluded from an investigation that Israel shot her is such Western thinking. The neutral facts don’t matter in a war that is deemed unfair. Even if shot by the PA, still Israel’s guilty of her death.

Israel’s PM said the preliminary results suggest she was not shot by IDF soldiers. Why would he lie? He suggested a joint investigation to get to the truth. Since when is the PA interested in objective truth? So, it said no.

It’s like a suspect claiming the right to be silent. It doesn’t add to eagerness of giving them the benefit of the doubt-what doubt? We’re lucky the PA is so clearly withholding damning information because—again—the IDF is stuck in red tape and perfectionism. It will come with its conclusions when no one is interested anymore. When will they learn to prioritize speed?

The only question that stays open is: Was she deliberately targeted by her ‘Palestinian brethren’ to blame the Jews, or was she the unintended victim of indiscriminate shelling by terrorists who never care about human life?

In any case, the ‘Palestinian leadership’ and their hapless population gained another photo opp, so needed with the war in Ukraine raging.

While much of Antisemitism through the ages is rooted in jealousy, Muslim-Palestinian terrorists understood, before anyone else, how the war in Ukraine would rob them from all their ‘deserved’ publicity.

They immediately spoke of their solidarity with the beleaguered … Russian People, victimized by Western/Ukraine Imperialism like they are by Jews.

That didn’t work very well. Be hey, there is no such thing as a bad press.

The text continues below the Dutch illustration 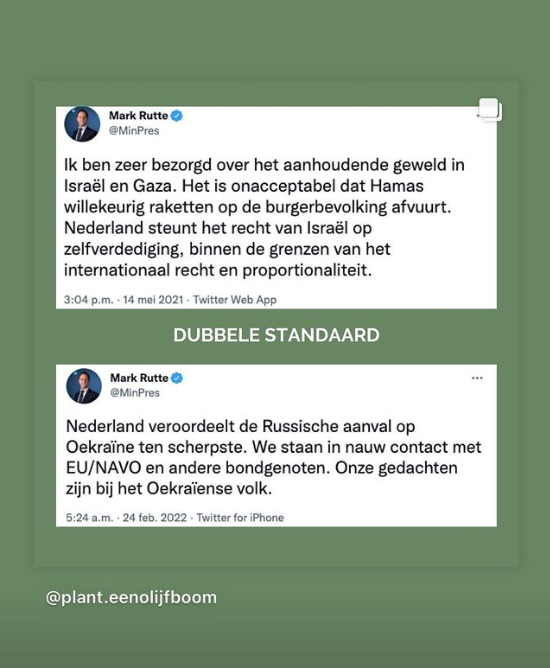 Above an attempt by a Dutch-Israeli ‘peace group,’ early in the Ukraine war, calling out the injustice and inequality that the Dutch PM had condemned the Gaza junta for rocketing Israeli citizens, but now Russia rockets the Ukraine citizens, he suddenly is on the side of the Ukrainians.

How warped must your perception be to call that “double standards”!

Having no new tools, the PA leadership has returned to organizing ‘spontaneous’ terrorist attacks in a desperate attempt to keep them in the news and doing its fair share in aiding the worldwide swelling of antisemitism. And, it’s working. It’s getting lots of attention and sympathy while murdering Jews. What else could they wish for?

Poor Muslim citizens living in poverty and without human rights in Gaza and the West Bank under a radical-Muslim dictatorship, and the world does not help them because it’s too busy telling Jews they are not OK.