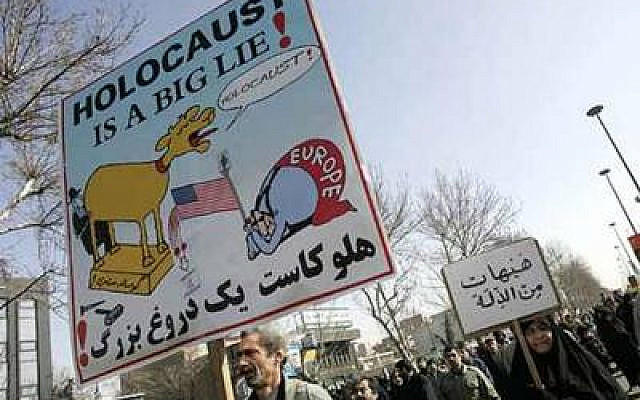 Last month the Iranian dictator Ali Khamenei sent a twitter message criticizing the French government’s past prosecution of the late and notorious Holocaust denier Roger Garaudy. Without a doubt Khamenei’s public support for Garaudy and other Holocaust deniers is unsurprising as Garaudy was welcomed to Iran as hero in the years prior to his death. While “hardliners” in Iran escalated their military threats against Israel, “moderates” under former president Khatami translated Garaudy’s books and paid for his legal defense in France. The Iranian regime for nearly two decades has also had a number of Holocaust denial cartoon competitions and sponsored Holocaust denial conferences welcoming notorious American and European anti-Semites. Yet what continues to baffle many in the West is why the Iranian regime’s leadership still continues to have a sick obsession with advancing Holocaust denial. While some may write off Khamenei and his cohorts as just plain unapologetic anti-Semites for supporting Holocaust denial theories, the reasons for the Iranian regime’s supporting such ridiculous theories have deeper roots. Understanding the many reasons for the Iranian regime’s constant vile Holocaust denial efforts may enable us who find their actions vile to educate the world about it and better combat against this nefarious evil.

Perhaps the most common explanation many Iran experts give as to the regime’s support for its outrageous Holocaust denial theories is because of their hatred for the establishment of the state of Israel. The Iranian ayatollahs wrongly believe that the world felt sympathy for the Jews after the Holocaust and as result gave them the state of Israel as a type of compensation for their facing near annihilation. Hence the Iranian ayatollahs now believe that if they can discredit the Holocaust as a whole, then the world will reconsider its support for allowing the Jews to have their own homeland in what the Islamic radicals believe is historic Muslim “Palestine”.

Historians worldwide agree for the most part that many Iranian Muslims during World War II had sympathies for Hitler because of the Nazi regime’s anti-Semitic policies and as a result they never wanted to demonize Hitler. The exposure of Nazism in Iran has had a long term effect on many Iranian regime leaders and followers. In 2015, I interviewed the German historian, Matthias Küntzel who researched the substantial impact of “Radio Berlin’s” daily broadcasts in Persian language throughout Iran during World War II. He said that while the Iranian Islamic Shiite tradition has always been very anti-Jewish, the after-effect of Nazi propaganda broadcasts from Berlin to Iran by their main radio speaker, Bahram Sharokh was profound. “The Nazis’ based their anti-Semitic incitement in Persian language on Islamic roots,” said Küntzel. “They radicalized some anti-Jewish verses of the Koran and combined them with the European phantasm of a Jewish world conspiracy”. Iranian journalist Amir Taheri has frequently indicated in his works that the Iranian regime’s late founder, the Ayatollah Khomeini was a regular and ardent listener of Radio Berlin’s Farsi broadcasts. Küntzel also said that Khomeini’s claims that “the Jews want to create a Jewish world state” mirrored a classical trope of Nazi anti-Semitism. Likewise, Iranian historians have long documented that in the early 1940s, the notorious Mufti of Jerusalem, Haj Amin al-Husseini—a Nazi collaborator—went to Iran, where he influenced Ayatollah Kashani and other Iranian clerics. Kashani is well known in Iran for promulgating Al Hussieni’s anti-Semitic beliefs and also mentored the regime’s late founder, the Ayatollah Khomeini.

Interestingly, over years the Iranian regime’s propaganda apparatus has published their own 500 plus page Farsi language version of the notorious “Protocols of the Elders of Zion” anti-Semitic conspiracy book and distributed it through their various embassies and diplomatic missions worldwide.

In 2007, I interviewed Frank Nikbakht, an Iranian-American activist and researcher based in Los Angeles who founded the “Committee for Minority Rights in Iran” regarding Holocaust denial statements of former Iranian president Mahmoud Ahmadinejad. Nikbakht said that Ahmadinejad’s education was influenced by his mentor, the anti-Semitic Ayatollah Mesbah Yazdi and by the late Ahmad Fardid, a self-appointed professor of philosophy at Tehran University. After the 1979 revolution, Fardid taught university courses on Nazi ideology, racial purity and Holocaust revisionism to thousands of students in Iran. Likewise, during the 1980’s Fardid was teaching the theories of the notorious pro-Nazi philosopher, Martin Heidegger at Tehran University. Additionally it must be noted that Ahmadinejad’s adviser, Mohammad-Ali Ramin, was an ardent anti-Semite who associated with neo-Nazis while he lived in Germany and he significantly contributed to the rise of the Neo-Nazi ideology in Iran during the Ahmadinejad presidency. Therefore given the extensive exposure the Iranian regime’s leaders have had to Nazi anti-Semitic ideology during World War II and afterwards, one can understand why the regime has in recent years been pursuing a policy of Holocaust denial.

Over the years many western Iran experts have failed to recognize that the Iranian regime’s radical Shiite Islamic dogma is also an important factor in the regime’s leaders continuously denying the Holocaust. I recently interviewed Nikbakht who indicated that the belief in “victimization” plays a major role in the Iranian regime’s Shiite Islamic faith. “The Shiites must always believe that they have been the ultimate victims in history, mainly but not exclusively because of the Imam Hossein story of Karbala,” said Nikbakht. “The Shiites characterize their prophets as well as all their Imams  –  even those who have died naturally – as having been killed by their enemies, in order to consider them as martyrs, or innocents and victimized saints. Given their religious beliefs of being the “ultimate” victims, the Iranian regime’s leaders and followers therefore, cannot accept that any other group of people, especially Jews who are infidels in their eyes, could also be victims! Hence the Nazi genocide of Jews is something the regime’s leaders refuse to accept or believe no matter how much evidence is made available to them. Nikbakht also said the Iranian Shiite leaders therefore have to diminish the scale of other people’s victimhood, in particular, that of the Jews, who have been demonized in the Koran and even damned for eternity in the eyes of the Muslims and the Shiites.

When one examines all of these various factors that have played a role in shaping the Iranian regime’s leaders’ beliefs regarding the Holocaust, it is indeed not surprising to see why the regime does not stop with their constant Holocaust denial theories. With this knowledge of the Iranian regime’s motivations in repeatedly denying the Holocaust, many of us in the West must now ask ourselves the ultimate question as to why American and European leaders still continue to seek diplomatic and economic relations with such an evil radical Iranian regime? Those in the world who say “Never Again” when it comes to the Holocaust repeating itself, must now launch an international public campaign to ostracize the Iranian regime’s leadership for its ridiculous Holocaust denial campaigns and shame them worldwide for their advancement of this hideous ideology.