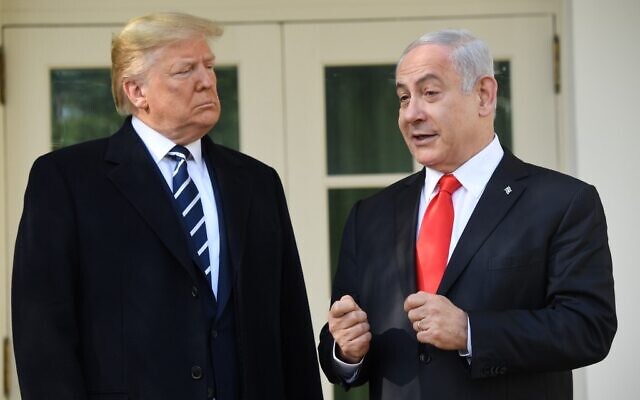 US President Donald Trump greets Prime Minister Benjamin Netanyahu as he arrives for a meeting on the South Lawn of the White House in Washington, DC, January 27, 2020. (SAUL LOEB / AFP)

Such is human nature that Benjamin Netanyahu probably has considerable support for his “promises” to seize on the imminent Trump Plan to try to annex parts of the West Bank. That it is clearly an election ploy by Donald Trump to help Netanyahu is mostly overlooked amid the collective air of a servant being grateful.

How happy would these patriots all be if such a move sparked a new intifada and unprecedented Islamic State terrorism; killed the peace treaty with Jordan; ended diplomatic warming with the Gulf; accelerated moves against Israel at the International Criminal Court; and begat a variety of unpalatable sanctions from the developed world (with the exception of Trump’s United States)?

I am not saying all these things will happen. But they could, and a subset of them almost certainly would. It is likely to include people dying who would not have died had Hillary Clinton run a better campaign in 2016.

The infantile zeitgeist whipped up by a decade of Netanyahu’s spin machine basically holds that the American landlord has “given his permission” for a “historic” move that must not be “wasted.”

So I wish to remind readers that no government including Likud governments had ever annexed bits of the West Bank unilaterally (excepting the Jerusalem environs) because everybody agreed it was a terrible idea. America’s opposition to such folly was far from the only reason. If the US temporarily does not oppose it that is far from sufficient reason to jump from the roof.

We are currently in a moment of relative quiet in the West Bank in which there are indications the Palestinians are feeling deflated enough to (just maybe) support a leadership that exhibited more flexibility than seen in the past on borders, refugees and even Jerusalem.

With the right arrangements a plan like the Trump plan could help nudge them toward that. These moves would include negotiations instead of unilateral moves and a historical level of financial compensation made available on easy and rapid terms; openness toward a new arrangement in the Old City; and a sincere apology for the expulsions of 1948-9.

Humiliations and unilateralism will likely achieve the opposite. Some predict the Palestinians would not dare misbehave because of their dependence on work permits in Israel and the benefits they themselves enjoy as a result of the security cooperation between the Palestinian Authority and the IDF. They forget that the Palestinians were riding pretty high in 2000 and no rational interest prevented the explosion that came when the stars aligned that way.

It’s not all Trump’s fault — except for the timing designed to help Netanyahu. Trump is not a man with good judgment and he doesn’t know much, but I wrote a year ago that his penchant for wild moves might beget a useful plan that reshuffles a deck that needed reshuffling. He may have actually done a partial, inadequate version of this. There is no harm in accepting it, but implementing anything like annexations unilaterally would be a fool’s errand.

On the positive side of the Trump ledger:

But there appear to be problems:

Netanyahu is clearly hoping for a boost in the March 2 elections to get him to a 61-seat majority without need of Avigdor Lieberman’s truculent undecided party. That way there is a chance he will gain the votes to stop the Supreme Court preventing him holding onto power during the coming bribery and corruption trials. It would be a genuine tragedy for Israel, and judging by the right-wing parliamentary cabal, there would be a good chance: they really have no limits.

One can only hope Benny Gantz, Yair Lapid and the Blue and White leadership understand all this – and will avoid being tricked into supporting a reckless annexation move while at the same time not losing too many votes.

It appears they do. Gantz wisely went to DC and politely attended a separate meeting, but he is saying that job one is to deny Netanyahu immunity and peace moves will come only after the election.

It may be a case of dirty trickery successfully repelled. The question now is whether the annexation foolishness can be averted as well.