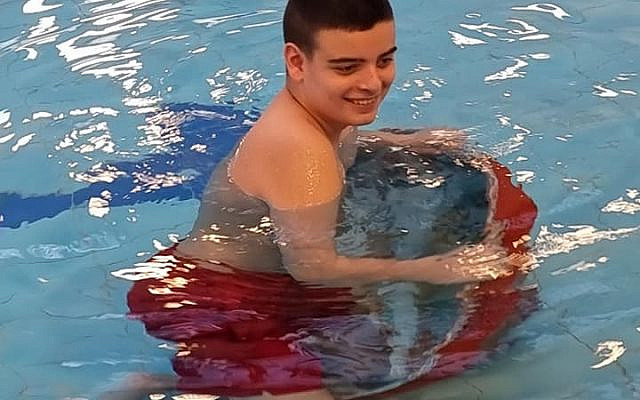 Daniel has never said a word in his life. He has always found walking very challenging. Autism and epilepsy are part and parcel of his reality.

His Mom and water give him strength and hope, love and laughter, challenge and growth. Weekly hydrotherapy is his fuel and his love.

Daniel is 15 years old, has never spoken a word but his extraordinary abilities of persistence, of overcoming task and trial speak volumes.

The image of this boy, this young man, pulling himself up, out of the water and into a rope swing brings tears to his mother Michelle’s eyes and a lump in the throat of his hydrotherapist at Beit Issie Shapiro in Ra’anana.

ln his essay on this week’s Torah portion Shelach, the late Chief Rabbi Lord Jonathan Sacks z”l so movingly writes: “The truth is that in no small measure, a law of self-fulfilling prophecy applies in the human arena. Those who say ‘We cannot do it’ are probably right, as are those who say, ‘We can’.

When the Hebrew spies return from their scouting out the land during this week’s Torah portion, they bring harrowing reports of unsurmountable challenges and seemingly invincible barriers to entering and setting up home successfully in the Promised Land.

“The people who dwell in the land are strong, and the cities are fortified and very large… We are unable to go up against the people, for they are stronger than we are… The land, through which we have gone to spy it out, is a land that devours its inhabitants, and all the people that we saw in it are of great height…. We seemed to ourselves like grasshoppers, and so we seemed to them”. (Numbers 13:27-33)

A new land, a permanent home beaconing for a people recently enslaved in Egypt, ten of twelve leaders, senior figures, one from each of the twelve tribes, fear a future that requires hard work, risk-taking and self-management of personal lives and of society in general.

A shift from miracles and heavenly-granted great escapes, victory in battles and food (manna) from heaven. God becomes life’s partner and not just sole provider.

“We cannot do it” said the majority. “We can” said Joshua and Caleb, the two who recognized their moment had come, to bring their abilities and faith to the fore in the face of these supposed enormous hurdles to success, in a moment of deepest crisis and loss of faith.

Of their generation, only they went on to have the privilege to enter the land of Israel.

I recall my first visit to the Arab-Israeli town of Qalansua earlier this year, spending time at our local Sindian Center, Israel’s first Early Intervention Center for children with complex disabilities in the Arab community in Israel. Here we witnessed the fruits of synchronization between innovative therapies and unappeasable desire for personal growth and progress.

The image I took away from that day was a boy in the kindergarten of our Early Childhood Intervention Center. In this session the local Beit Issie Shapiro team was employing the use of the very large smart touch screen we install in our classrooms to help children with disabilities — those with severe, multiple and complex disabilities — to learn, to take part, to grow and to enjoy like other children.

The therapists and teachers encouraged this one boy to stand and walk to the smart screen and touch a picture that was the answer to the question posed.

He sat frozen and did not move.

These dedicated, loving women encouraged him. Cheered him on. As did we. Then with a brief helping hand to lift himself, this small, brave child, his legs supported by braces from the knee down, began his personal journey toward the bright lights and ray of hope that the smart screen represented.

Neither overcome by the moment nor by the challenge he faced then and every single day, he found his moment to harness his extraordinary abilities and push himself beyond perhaps preconceived expectations.

Mission Possible. He completed his task, walked slowly, careful step by careful step, back to his seat. Head held high, radiant smile filling the room and our hearts.

None of us in the room were swayed by any pre-misconceptions. We are privileged to see the power of the human spirit each and every day.

Perhaps this was the genesis of the spiraling fiasco that became commonly known as the sin of the spies and that left the Children of Israel confined to the desert for an extra forty years. A forgetting, overlooking, and disparagingly reframing the national experience and the unlimited potential that lies ahead if we tackle each every challenge confidently together.

As Rabbi Sacks so quaintly highlights, “Confidence, by the way, is Latin for “having faith together”.

We know well what can be done when we believe and unite behind the extraordinary abilities of people with disabilities. They are our modern Caleb who silenced the people before Moses then and said, “We should go up and take possession of the land, for we can certainly do it”. (Numbers 13:30)

About the Author
Michael Lawrence is Chief Advancement Officer and a member of the Executive Team at Beit Issie Shapiro in Ra’anana, Israel’s pioneering leader and innovator in the field of disabilities, changing lives of people with disabilities in Israel and around the world. He is also the author of "Nonprofit Parasha", on Leadership, Philanthropy & Community in the weekly Torah portion.
Related Topics
Related Posts
Comments