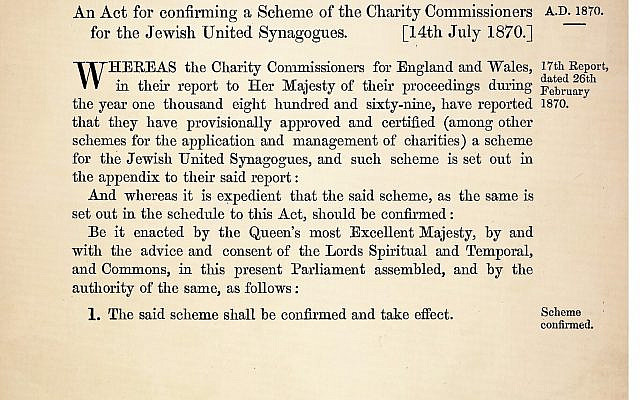 United Synagogue which was created by an Act of Parliament by the British government in 1870.

Sesquicentennial is a word we do not often hear. In 2017 we celebrated the Centennial of the Balfour Declaration, and Allenby presenting Jerusalem to the British people for Christmas. So much world history has transpired over the past 150 years, or sesquicentennial. Depending on where you grew up, or what you learned in school, some history may be unknown to you. As an immigrant living in Israel, one is exposed to history of so many nations.

A perfect example would be what does US mean? Most people think US means United States; yet to many Brits, who now call Israel home, the US means United Synagogue which was created by an Act of Parliament by the British government in 1870.

Generations prayed, studied, married, and were buried by the US. “The US is still the only Jewish religious body established by an act of the secular legislature. The organisation grew rapidly, expanding to the suburbs as communities moved. Today the United Synagogue remains one of the most influential religious bodies and is the largest synagogue movement in Europe. Its structure has enabled new congregations to grow and old congregations to downsize gently with their assets used to support other communities.” Elkan D. Levy, Past President of the US (1996-1999)

Recently, the United Synagogue celebrated 150 years since its foundation with a reception at the Houses of Parliament. More than 200 people returned to the place where the organization was created in 1870 by the Jewish United Synagogues Act.

Emeritus Chief Rabbi Lord Sacks hosted the event in the Terrace Pavilion, overlooking the River Thames. What made the evening special was the representatives from most of the United Synagogue’s 60 congregations, as well as communal leaders, and politicians such as Oliver Dowden, MP for Hertsmere, Mike Freer, who represents Finchley and Golders Green, Lord Stuart Polak, and Lord Monroe Palmer.

“The formation 150 years ago, with the coming together of five London synagogues was a miracle on the same level as the division of the Red Sea” and that it “renders the United Synagogue somewhat unique in many ways today with sixty communities, but stronger and younger than it was 150 years ago.” Lord Sacks
Sacks, who served from September 1991 to 2013, spoke about the diversity of the organization, saying it provides a home for the “most learned, the least learned, the most observing, the least observant, and we’re all friends, and that is extraordinary”.

Chief Rabbi Mirvis (L) and Emeritus Chief Rabbi Lord Sacks (R) returning to the House of Parliament where the organization was created in 1870 by the Jewish United Synagogues Act. (Copyright Paul Lang Photography)

Chief Rabbi Mirvis offered a prayer of thanks for the 150 years of the United Synagogue and prayed that the US should only go from strength to strength. “What we are doing here this evening is we’re coming back to the place where the United Synagogue was born, where it all started and actually it’s not such a Jewish thing to do”.
Explaining that Jews do not return to ancient Mesopotamia or Mount Sinai where fundamentals of the faith were laid, he said: “While our history and our past are crucial to us, because you can only know where you’re going to if you know where you’re coming from, the present and the future are far more important for us.”

Replying to the “loyal greetings” relayed by the US President, Michael Goldstein, the Queen extended her best wishes to the United Synagogue on its 150th anniversary, having been a guest at the US’s centenary reception. In his letter, Mr. Goldstein noted that the US was established by Act of Parliament in 1870 and had grown to represent some 48,000 adult members, plus children, across 60 communities. It was conscious of obligation to support those in need beyond the Jewish community, adding “Synagogues reach out regularly to support homeless shelters, asylum seekers and vulnerable members of society.”

In order for history to continue, the US’s Mission, is engaging members with mainstream orthodox Jewish living, learning, and caring., The US is committed to Judaism that is a continuation of the normative orthodox halachic process built on an unbroken chain that connects the Jews of today with the Torah given by God to Moses and the Jewish people at Mount Sinai.

According to Richard Verber, Director of Communications, “The United Synagogue regularly takes shul groups to Israel for visits and we have staff members based there to facilitate trips. Every year we run a Shabbaton with the Chief Rabbi for gap year students and we also have staff based there to engage them with programming throughout the year, provide a home from home or just somewhere to watch the football!”

Celebrating United Synagogues past, and ensuring a golden future, a rich calendar of events has been put together to mark the 150th celebration with a focus on individuals, on shuls and on the whole US and wider community. Highlights include: US 150 Gala dinner, Shabbat 150, Family Fun Day, Classical Music Concert at Cadogan Hall, Interfaith Reception at Guildhall, Grand opening of Willesden Jewish Cemetery’s House of Life, and so much more.
For more information, please contact Miriam Marson at MMarson@theus.org.uk

About the Author
Andee Goldman moved to Israel in 2006 from Las Vegas, Nevada. Since 2008, as a nonpartisan, she has volunteered helping American overseas to vote in America's Federal Elections. YOUR VOTE IS YOUR VOICE https://www.nass.org/can-I-vote As an Israeli, she has become a history buff and enjoys sharing her experience and travels around Israel and the world!! Andee is available to answer your voting questions at votingfromabroad@gmail.com
Related Topics
Related Posts
Comments