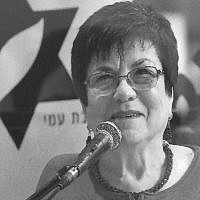 The Blogs
Anne Rothenberg
Apply for a Blog
Please note that the posts on The Blogs are contributed by third parties. The opinions, facts and any media content in them are presented solely by the authors, and neither The Times of Israel nor its partners assume any responsibility for them. Please contact us in case of abuse. In case of abuse,
Report this post. 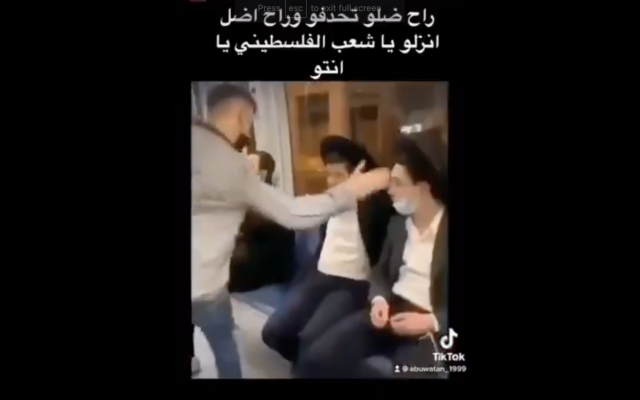 Screen capture from a TikTok a video of a Palestinian teen slapping Jewish passengers on the Jerusalem light rail train, April 15, 2021

More violence has erupted in Israel. Children and adults have been beaten in the streets of Jerusalem. Confrontation with the police and attacks on religious Jews have become daily occurrences. Many of the attackers have been so brazen as to share their assaults on social media. The violence is clearly motivated by the world’s oldest method of hatred – antisemitism – and with the help of the United Nations, it has become a cornerstone of terrorist recruitment.

When Jews outside Israel are thrown from balconies, stabbed during Hanukkah celebrations or shot in supermarkets and synagogues, there is no debate about what motivated the attack. It’s antisemitism. But clear-eyed analysis is all too often lacking when Jews are attacked in Israel. As one of the tens of thousands of olim that arrive every year, the double standard from abroad can be painful, but the conversation is shifting.

In Washington, Democrats and Republicans are backing a campaign led by Hadassah, an organization with tangible and historic ties to Israel and an army of advocates across America. It is endorsed by more than a dozen other pro-Israel organizations. And it may be the best and most realistic chance we have of curbing the spread of Palestinian antisemitism and – by extension – terrorist violence.

Their plan is to leverage the influence of Congress to urge UN Secretary-General Antonio Guterres to exercise his powers to assume oversight of the United Nations Relief and Works Agency for Palestine Refugees in the Near East, also known as UNRWA, which provides an education for hundreds of thousands of Palestinian children. UNRWA is supposed to ensure its classrooms reflect the “values and principles of the UN, such as neutrality, human rights, tolerance, equality and non-discrimination regarding race, gender, language and religion,” but it has always fallen well short of that mark.

As recently as January, the Institute for Monitoring Peace and Cultural Tolerance in School Education (IMPACT-se) found that UNRWA school curricula demonizes Jews, perpetuates “hostility and myths that provoke hatred,” advances conspiracy theories and uses “the Occupation,” “the Zionist Occupation,” “the Zionists,” or simply “the Enemy” to discuss Israel. Historically, classroom materials are produced by the Palestinian Authority, but even in the limited circumstances in which UNRWA produces its own materials, antisemitism persists.

This is not a point that UNRWA officials take issue with. In fact, UNRWA has admitted – publicly – that antisemitism has been a feature in its classrooms. The incitement to violence and antisemitic hatred has also been condemned by the UN Committee on the Elimination of Racial Discrimination. The evidence is clear. UNRWA-run schools are seeding new generations of young Palestinians to accept and embody antisemitism.

Greater oversight and accountability are long overdue. For decades, Palestinians have been fed a steady diet of antisemitism reinforced – if not led by – the lessons learned in UNRWA-run schools. For newly-minted Israelis, especially those making aliyah from the United States, it is jarring, offensive and intolerable.

For the UN, having Secretary-General Guterres seize control will demonstrate that it wants to live up to its values and is willing to reform itself when it falls short. By all measures, it is a serious measure that should win support in Washington and by all nations concerned with the rise in global antisemitism.

Other efforts by the European Parliament and some in Washington to curtail funding of UNRWA is admirable. It is a recognition and rebuke of UNRWA’s use of antisemitic content in its schools. But UNRWA will be funded and its work will continue. That’s why it’s critical for leaders committed to combating antisemitism to support a more permanent, measurable, durable and transparent solution to this immediate challenge.

Israel and the United States are committed to a brighter future in the region that is tolerant and peaceful, but that future is only possible when fuel runs out on the violence and Palestinians are prepared to make peace with Jews and the Jewish state. We all need a solution that will stick, and that solution is in education.

To stand up to those who stand to tear us apart, Congress must speak up. To uphold its mission and values, the UN must act. And to build a more peaceful and tolerant world, Israel needs the American people to continue advocating for ideas and policies that will have a greater impact on the future.

About the Author
Anne Rothenberg is President of Hadassah’s Nachama Chapter in Jerusalem. She made aliyah from Albany, New York in 2017.
Related Topics
Related Posts
Comments