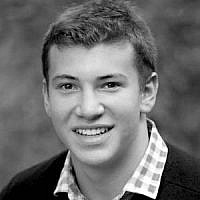 The Blogs
Jesse Arm
Apply for a Blog
Please note that the posts on The Blogs are contributed by third parties. The opinions, facts and any media content in them are presented solely by the authors, and neither The Times of Israel nor its partners assume any responsibility for them. Please contact us in case of abuse. In case of abuse,
Report this post.

The last of those characteristics is the newest one attached to my identity. In fact, I made the decision to no longer classify myself in this fashion less than 24 hours ago, upon reading of the recent change in standards decided upon at USY’s international convention. Formerly, to take on a leadership position in the USY youth movement, it was considered a requirement that board members commit themselves to refrain from, “relationships which can be construed as interdating.” The language was changed to, “The Officers will strive to model healthy Jewish dating choices. These include recognizing the importance of dating within the Jewish community and treating each person with the recognition that they were created Betzelem Elohim (in the image of God).” The change was made in an attempt to become a more inclusive youth group within a more inclusive movement.

Perhaps the crux of why this change so fundamentally irks me is in its lack of forthcoming language. If my former youth group, and in essence my former movement, is willing to compromise its commitment to the preservation of Jewish nationhood in the name of inclusivity, then why doesn’t it just say so? It is clear that this movement is on a path of setting its commitment to its original, cardinal principles aside in an effort to salvage some of its continually dwindling membership and “changing with the times.” The addition of Hebrew words in the language which adopts the permissibility of interdating is truly laughable. Saying that recognition of all humans being created betzelem elohim serves as a justification for interdating and eventually intermarriage, makes about as much sense as me arguing I should be eating delicious bacon in my Sukkah because the Torah says v’samachta b’chageicha, v’hayita ach sameach (we should rejoice in our holiday and we should feel nothing but toal happiness).

I am attracted to the heart of what the Conservative movement was built upon. I am attracted to the integration of the Jewish tradition into modernity through continual reinterpretation that builds on Halacha paired with an undying spirit of inquisitive learning and practice. This innovative expression of a tradition was established to answer questions of the day that our brilliant sages could have never even imagined, let alone addressed. It was not created in the spirit of perpetually moving to the left and blowing off the tradition, but rather to develop the tradition while keeping its pillars close to our hearts.

This movement should be leading the charge in offering Halachic analysis on the issues of embryonic stem cell research, cloning, homosexual relationships, and other facets of our society left unaddressed by our tradition rather than regressing from what has been previously established. It is offensive to me that this movement allows itself to make yet another revealing, significant pivot away from its core and toward American liberalism. It is particularly upsetting to me that this decision comes from the movement’s youth. The active decision to amend this bylaw is a blatant display of a change that is not rooted in valuable interpretation of Halacha but in readjustment based on modern convenience.

No one ever said Judaism was supposed to be easy. No one ever said it was supposed to be all fun. Judaism is a faith that connotes certain principles and morals. At the core of those values is the preservation of the nation itself through committed relationships to one another as well as to those principles which unite us all. Once the Conservative movement abandoned adherence to that belief, it abandoned me as well.

About the Author
Jesse Arm is currently a freshman at the University of Michigan. He is a graduate and former student body president of the Frankel Jewish Academy in West Bloomfield, MI.
Related Topics
Related Posts
Comments