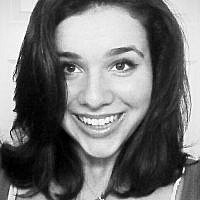 The Blogs
Amanda Botfeld
Apply for a Blog
Advertisement
Please note that the posts on The Blogs are contributed by third parties. The opinions, facts and any media content in them are presented solely by the authors, and neither The Times of Israel nor its partners assume any responsibility for them. Please contact us in case of abuse. In case of abuse,
Report this post.

Usually when I think of Vanity Fair, I think of celebrities, purses, and shoes. That’s why I was so surprised when I read its August report: All throughout Paris, anti-Semitism is in fashion.

Marianne, the goddess of French liberty, in the very center of the Place de la République?” the article begins, quoting the chairman of one of France’s most treasured luxury brands.

The swastika-on-a-statue incident came from the anti-Israel protests last July, during which thousands chanted: “MORT AUX JUIFS! MORT AUX JUIFS!” In English, “Death to the Jews”.

The difference between being anti-Israel and anti-Jewish hangs by a thread, if that. As anti-Zionism has made anti-Semitism more ordinaire, hundreds of protesters were able to charge “into the Marais, Paris’s historic Jewish quarter, stopping briefly at an empty synagogue on the Rue de Tournelles, near the Place de Vosges, and then racing, reportedly with iron bars, axes, and flags” until they reached their their final destination, a synagogue.

Outside the synagogue gates, the protestors screamed: “Hitler was right! Jews, get out of France!” Once again, these demonstrators who had come from a rally protesting Israel, were now holding France’s Jewish community liable.

Naturally, this raises the question of chicken-or-the-egg. Has what started as hostility toward Israel carried over into hostility toward Jews, or was anti-Zionism a front for anti-Semitism all along?

Regardless of which initially pulled the thread, the sweater is unraveling, and unraveling fast. The French Interior Ministry reports that although less than 1% of the population is Jewish, 51% of all racist attacks were committed against Jews. Even “dressing Jewish” is viewed as provocative.

In this sense, perhaps there is no publication better than a fashion magazine to cover this issue. The crisis in France is not a series of lone wolf attacks; the crisis is that anti-Semitism is becoming popular. “Is it true that if I lived in America I could wear a tiny Star of David necklace?” asks a young French girl, one of the interviewees. One wonders if there will be a time when a swastika is more acceptable than a Star of David. One worries that time has already come.

Of course, not all of France is bowing to this trend. France’s Prime Minister Manuel Valls has passionately defended French Jewry, saying, “if 100,000 Jews leave, France will no longer be France anymore” and “To understand what the idea of the [French] republic is about, you have to understand the central role played by the emancipation of the Jews. It is a founding principle.”

Essentially, France is the liberal capital of the world. It stands for tolerance. But unable to accept its Jewish minority, France backtracks on its own principles, the values it set for itself three centuries past. In the words of the Prime Minister: “The French Republic will be judged a failure.”

As a result, France has sharply increased security. Jewish schools, cultural centers, and places of worship are now guarded by government forces.“Soldiers play football in the yard with children,” says Shimon Samuels, Director for International Relations at the Simon Wiesenthal Centre. “Three soldiers with machine guns at the entrance. Two in the back. Five looking in. Now, it is almost a state of war.”

That is a far cry from the glamour that was once French liberalism.

Besides, security measures aren’t making the cut. France used to track graveyard anti-Semitism — swastikas and Jewish epithets vandalized onto tombstones — but can no longer keep count. Attacks in the first half of 2015 increased by 84 percent. Mobs have left French police officers and authorities helpless to respond, paralyzed by their sheer size.

On July 26th, the day of the anti-Israel-turned-“MORT AUX JUIFS!” demonstration, protesters numbered in thousands — more than double the 2,000 French police officers. As told by Vanity Fair:

Do something! Do you see what is happening here?” the chairman said to a line of police officers watching the demonstration build to a frenzy. “What do you expect us to do?” one officer said, then looked away.

France’s police men and women are unfit to protect the Jewish population for one basic reason: they shouldn’t have to. There is something intuitively unnatural about government forces going against the will of the people. If civilians are out for blood en masse, the problem has surpassed matters of policing. It is a deeper matter, coming from the public, the populace. It is an issue of what’s popular. From the streets of Paris, leave it to Vanity Fair to declare when anti-Semitism is en vogue.