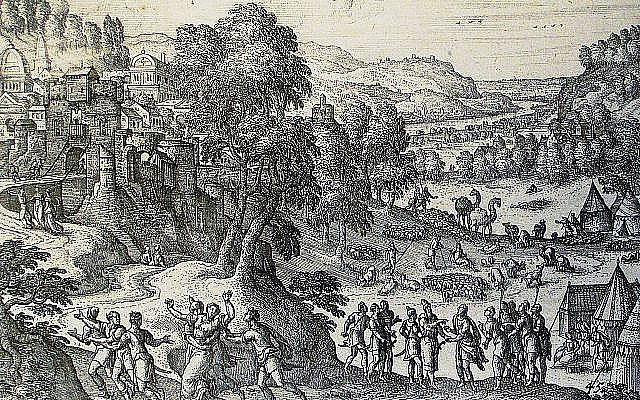 Is what is legal always right, and is what is right always legal? When do practicality and survival override concerns of morality and justice, and when do they not?

These questions and more come out in the sharp disagreements between Jacob and Shimon, and Levi in the wake of the killing of the city of Shechem.

“Now it came to pass on the third day, when they were in pain, that Jacob’s two sons, Simeon and Levi, Dinah’s brothers, each took his sword, and they came upon the city confidently, and they slew every male. And Hamor and his son Shechem they slew with the edge of the sword, and they took Dinah out of Shechem’s house and left.” (Breisheet 34)

Shimon and Levi followed with help from their brothers, killed and ransacked an entire city; clearly a disproportionate response. Seeing the collateral damage they have done, their father, Jacob, is furious.

“Thereupon, Jacob said to Simeon and to Levi, “You have troubled me, to discredit me among the inhabitants of the land, among the Canaanites and among the Perizzites, and I am few in number, and they will gather against me and attack me, and I and my household will be destroyed.”

The challenge in reading Jacob’s response is understanding the root of his objection. Simply speaking, Jacob’s greatest criticism of his sons is practical–not moral. Jacob fears that his sons’ violence will cause other inhabitants of Canaan to attack him in the future. This reading is future justified by Shimon and Levi’s response: “And they said, “Shall he make our sister like a harlot?”

Shimon and Levi seem to be the pure ideologues, while Jacob is the pragmatist. If we were to judge strictly on what we read here, we would say that Jacob had only practical, not moral, objections to the actions of Shimon and Levy, while Shimon and Levy acted on purely moral grounds. They got the final word.

As we look at what Jacob said on his deathbed, the story of Shechem clearly remains on Jacob’s mind for many years to follow. Even as he is on the verge of death, blessing and wishing well to all of his sons and grandsons, Jacob turns to Shimon and Levi and says in the sharpest way possible: “Simeon and Levi are brothers; stolen instruments are their weapons. Let my soul not enter their counsel; my honor, you shall not join their assembly, for, in their wrath, they killed a man, and with their will, they hamstrung a bull. Cursed be their wrath, for it is mighty, and their anger because it is harsh. I will separate them throughout Jacob, and I will scatter them throughout Israel.”‘

After all, Jacob’s objections to his sons’ actions are not just practical. His moral resentment of their use of violence is a desire to avoid any association with their violent legacy and speak for themselves. Jacob is not content with merely condemning Shimon and Levy’s violence in the destruction of Shechem but also curses their wrath–and at the very same time, he is blessing his other sons. His objections for what they have done in Shechem are very much based on moral grounds.

Commentaries noting this difference explain that Jacob’s sharpened approach to this decades later comes in light of the cruel treatment of Joseph by his brothers and his valid suspect that Shimon and Levi played an integral role in the heartless sale of young Joseph to a faraway Egypt. Killing the entire city of Shechem out of their concern for their sister Dina is one thing. Yet if they then turn on their own brother and sell him into slavery, clearly, brotherly concern is not all that is motivating them. Clearly, an inherently violent impulse is at play. It is this dark impulse that Jacob condemns and wants to have no part in.

This resentment continues to echo through the centuries. In the book of Bamidbar, as we are told of Korach’s rebellion against Moshe, the Torah reminds us of Jacob’s furry: “Korah the son of Izhar, the son of Kohath, the son of Levi took [himself to one side] along with Dathan and Abiram, the sons of Eliab, and On the son of Peleth, descendants of Reuben.” (Bamidbar 16:1)

Rashi, the great commentator Rabbi Shlomo Yitzchaki, comments on the above verse, saying: “[The verse] does not mention, “the son of Jacob,” because he [Jacob] prayed not to be mentioned in connection with their quarrel, as it is stated, “my honor, you shall not join their assembly.” (Gen. 49:6)

Jacob’s resentment continues to echo from the ashes of the city of Shechem through the generations.

Furthermore, when Moses blesses the tribes of Israel before he passes away (Dvarim 34), he blesses all tribes–except for the tribe of Shimon. The medieval Tosafite commentary Daat Zkenim notes that the omission of Shimon’s blessing is consistent with Jacob, not blessing Shimon before he passed away. Clearly, Jacob’s fundamental anger with what Shimon and Levy did in Shechem continues to echo through the generations.

All these difficulties are magnified and multiplied by what we are told in the next chapter. As Jacob and his family depart from Shechem, the Torah tells us: “Then they traveled, and the fear of God was upon the cities that were around them, so that they did not pursue Jacob’s sons.” (Beresheet 35).

One would think that after Jacob’s practical concerns have been mulled, Jacob should change his position towards Shimon and Levy. Instead, what we see is the opposite. Even as the children of Israel walked freely and fearlessly through the land of Canaan, clearly, his anger grew. Additionally, Jacob is the very same person who referred the case of Dina and Shechem to Shimon and Levy. Why would Jacob protest that which history has vindicated? Clearly, Jacob’s practical concerns have been dispelled.

Throughout the centuries, knowing we were a minority, Jews knew we would not be winning on the battlefield–we needed to win the moral high ground. If we acted with honesty and integrity and answered to a higher calling, we would win the respect of those who saw us. “Then all the peoples of the earth will see that the name of the Lord is called upon you, and they will fear you.” (Dvarim 28) Jacob saw moral superiority not only as the right thing to do but also as a prescription for survival. When Jacob told his sons they had hurt his reputation among the people of the land; he was not only expressing a practical concern, he was talking about the loss of the moral high ground.

Yet, as professor Moti Keidar and others would often note, the Middle East has a very different mindset than other places. Shimon and Levy have a far better understanding of the society they are living in than Jacob did. They understand that in that area, being seen as weak is an invitation to aggression. When they say, “Shall he make our sister like a harlot?” they are not just expressing a morally superior opinion; they understand that being perceived as such in such an environment is an invitation to be trampled on. And they were right. The people of the land had great fear of them. The fear of God did strike the hearts of those who surrounded them and heard about them.

Jacob will not accept Shimon and Levi’s version of morality. Might can not make right. He rightfully suspects that Shimon and Levi’s aggressiveness helped lead to the heartless crime of the sale of Joseph into slavery and attempting to mislead their father Joseph was dead.

Just cursing a child on your deathbed can be seen as an extreme act of cruelty. It is not what Jacob does before he dies. Jacob is letting Shimon and Levi know that might does not make right. As Rashi there notes–” Klei Chamas” stolen tools refer to the fact that might and power are the share of Essau, not the family of Jacob. Not that the children of Jacob cannot fight, but their fight must be morally justified. As long as there is moral justification, there can also be force. In the episode of Shechem, the amount of force executed by Shimon and Levi far exceeded the moral justification. When Shimon and Levi helped overpower Joseph and commit the worst crimes in the history of our patriarchs, selling Joseph into slavery, they have proven that they adopted the belief of their surroundings that might make right.

The tribe of Levi famously redeemed itself by taking up force–for the right cause. At the sin of the golden calf, Levi took up arms, joining Moses with the call of “whoever is to God, to me!” and thus redeemed himself; for that, Levi was not cursed before Moshe’s death. Shimon, who failed to redeem himself, continued by steeping into the depths of immorality, as we are taught in the book of Bamidbar about the head of the tribe of Levi Zimri, sinning with the Midianite woman, Kozbi, just to be killed by Pinchas–also from the tribe of Levi.

The Midrash (Sifri 349) addresses the forgiveness to the tribe of Levi contrasted with the lack of forgiveness towards the tribe of Levi and answers with an analogy. The Midrash says: “it is like to people who borrowed money from the king. One retired the money and even gave the kind a loan. The other person not only defaulted on his loan but asked the king for another loan. Similarly, both Shimon and Levi both borrowed in Shechem, as it says, “the two sons of Jacob, Shimon, and Levy, brothers of Dina each took their swords, came to the city surly and killed every male in the city. Levi paid back what he borrowed in the desert, as it says (Shmot 32: 26), “and Moses stood at the gate of the camp and said, so said Hashem, put your sword on your thigh and the Levites did as Hashem commanded…”

The story of Shimon and Levy leaves us with more questions than answers. Yet one powerful lesson it teaches us is that acting with zealotry invokes a moral test on the actions of the zealot. Those who act with zealotry will be held to higher standards. Those who hurt others in the name of higher ideals will be judged with higher moral standards. It also teaches us that to be powerful, you must be moral, while you can be moral without being powerful. Jacob believed that his higher moral standards would allow him to gain the respect of others by virtue of his merit. “Lo Bizchut Hakoach ela bkoach hazchut–not in the merit of power, but in the power of merit.” It took centuries for Shimon and Levi to learn the same lesson. Shabbat Shalom.