My father and I at the Circassian Heritage Center in Kfar Kama, Israel in April 2022. (Luiz Gandelman)

Almost anyone can tell you that Israel is a Jewish state. As a matter of fact, roughly 75% of Israel’s population is Jewish. The next largest group is Arabs, both Muslim and Christian, followed by Druze Israelis. One group is often fully excluded from the conversation, however: the Circassians. Numbering just an estimated 5,000 in Israel, they are a population many don’t realize lives in Israel.

Exiled from the area of the Caucasus mountains known as Circassia around the 19th century, the Circassians found refuge in the area of present day Israel, primarily in the northern region, today Kfar Kama and Rehaniya. These Circassians have lived in this area since the Ottoman period, remaining here today they have a vibrant culture and play an important role in Israeli society, being one of two minority groups (alongside Druze) who must serve in the IDF.

This past year, I had the privilege of visiting Kfar Kama, a Circassian city, and visiting the Circassian heritage center. I had heard about Circassians in Israel via some accidental research, and I was instantly amused. When my family spent Pesach with me in Israel, my dad arranged a trip to Kfar Kama to learn more about the Circassians. My dad and I are both lovers of culture and learning, so when we had the opportunity to learn more about Circassian culture, we were completely in. We drove a few hours from Tel Aviv to Kfar Kama, enjoying the scenic, breathtaking beauty of the Galilee as we went. We finally arrived in Kfar Kama, a small town not too far from Nazareth. 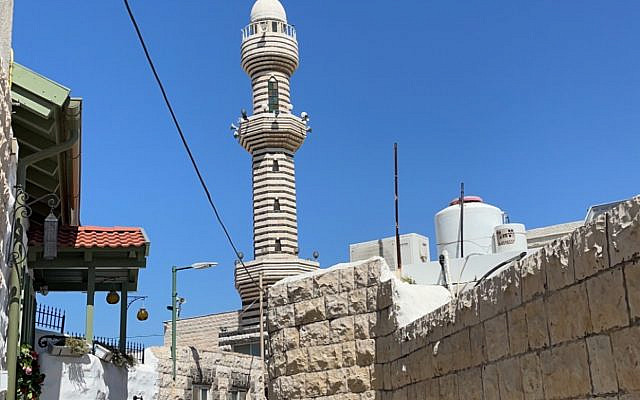 View of a Sunni mosque inside the Circassian village of Kfar Kama, in Israel. (Luiz Gandelman)

At the heritage center, I watched a video presentation and a lecture about Circassian culture. I was captivated. I loved learning about how Circassians established their community in Israel, as well as how it thrived as so. I learned many facts, like that Circassians were known to be horseback warriors, and that they speak their own language, Adyghe. All of this information was presented by a Hebrew video and an Israeli man. He mentioned how he was proudly Israeli, Circassian, and Muslim. It was incredibly powerful to learn about this from a Circassian himself, and the backdrop of the heritage center made it all that much more amusing. The center has signs in Hebrew, English and Adyghe, and the Circassian and Israeli flags are commonly seen. Inside a small museum-like exhibit, I was able to see traditional Circassian clothing, weapons, and even furniture. Their culture and all the artifacts present were very clearly from the Caucasus, making it even more interesting to know that this community has thrived here since before the State of Israel was even established.

I marveled at the traditional Circassian dances in the video and the ceremonial outfits in the museum. I enjoyed Mataz and Burekas with Circassian cheese, an amusing representation of the Circassians’ integration into Israeli society. The entire experience’s takeaway was just that. Circassians live in Israeli society as full members, working in industries and even playing sports. As a matter of fact, the captain of the Israeli national soccer team at the time of writing is Bibras Natkho, a Circassian-Israeli. Circassians interrogate themselves into society strongly by joining the IDF and doing national service, something that they take great pride in doing.

Despite all of their involvement, many Israelis do not realize they even exist, and even less realize the extent of the Circassian community’s loyalty and service to Israel. While this loyalty is a staple of Circassian communities worldwide, it is especially powerful in a state like Israel, one that is openly defined as a Jewish state. Street sign for “Tameridzy Street” in Kfar Kama, Israel. The name of the street is written in Hebrew, Arabic, and Adyghe. (Marco Gandelman)

Most Circassians in Israel are proficient in Adyghe, Hebrew, Arabic, and even English. The most surprising of the three, however, is Adyghe. Throughout hundreds of years of exile in all corners of the world, Circassians have managed to hold on to their culture despite assimilation. This is a message that should resonate heavily with the Jewish people, who much like the Circassians, were forced out of our homeland in a mass exile to all over the globe. Our efforts to keep Hebrew alive are similar to their efforts to keep Adyghe alive, and the preservation of Circassian and Jewish culture in exile are comparable.

Until 1948, the Jewish people were stateless, simply living in somebody else’s country. Circassians are still in that position, as they are unable to establish a Circassian state. Despite that strong and unified cultural identity, they remain staunchly loyal to the countries they reside in, whether that be Turkey or Jordan, or Russia or America, and especially Israel. As people who understand what exile and genocide are like, Jewish Israelis should be the biggest supporters of the Circassian community. While they are heavily welcomed and integrated into Israeli society, it is crucial that work is continuously done, especially to preserve Circassian culture. Circassian concerns over social issues and discrimination should be observed attentively and dealt with swiftly. Circassians are a fundamental and amazing part of Israeli society, and it is about time they are able to get the spotlight and appreciation they deserve. 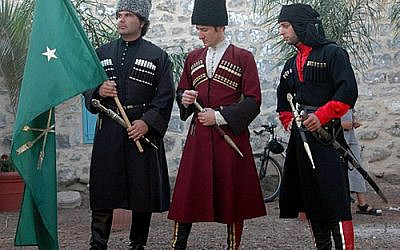 Israeli Circassians in typical dress with the Circassian flag at the Circassian Heritage Center in Kfar Kama, Israel. (Wikimedia Commons)
About the Author
Luiz Gandelman is a 17 year old student originally from São Paulo, Brazil, who lives in Miami, Florida. He is involved with multiple Jewish and secular youth groups and political organizations. Luiz is a big basketball and Star Wars fan and an avid scuba diver. He is also a fan of geography, politics, history, and anything of the sort. Most importantly, he is a proud Jew.
Related Topics
Related Posts
Luiz Gandelman