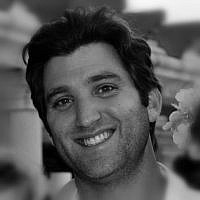 Last Thursday night, while I was flying over the Atlantic to join up with my wife and kids for another summer vacation in Jerusalem, a beautiful and innocent 13-year-old girl was sleeping in her home in Kiryat Arba, just outside the biblical city of Hebron. Hallel Yaffe Ariel was likely dreaming about the dance show she had given earlier that night in Jerusalem. Hallel’s dreams abruptly ended when suddenly a 17-year-old Palestinian terrorist from a nearby village, jumped the barbed-wire fence that surrounds Kiryat Arba, climbed through a window at Hallel’s home and stabbed her to death as she slept in her bed.

Even as I type these words, my blood boils. Tears well up in my eyes. My jaw clenches. My arms twitch. My emotions are a blend of pure anger and deep sadness. What occurred is both impossible to fathom and incredibly real.

Sunday morning, while sitting at a coffee shop in Jerusalem with my wife, we could not talk about our Israel plans or even the camp our kids were attending. Instead, our conversation kept turning back to the heinous murder of Hallel Yaffe Ariel z”lb. Having three daughters of our own, the very conversation is difficult. How can you allow such a horrific thought to even cross your mind, let alone slip through your lips? Yet, there we were, discussing the horror… on our summer vacation.

We decided that we could not be in Jerusalem and not visit the Ariel family, who were sitting shiva just an hour away. My sister-in-law was coordinating buses for dozens of people to go visit the family from Tel Aviv, Jerusalem, and even Tzfat. Should we go with the group? The thought of going there at all was intimidating. I was too emotional to envision walking into the Ariel home with a big group. Instead, my wife and I decided to go with only two others from our family.

So, the next day, after dropping our kids off at summer camp, the four of us drove in a rented bulletproof van from Jerusalem to Kiryat Arba. Driving in a bulletproof vehicle is maddening to me. This is our nation, our land. We should not have to go anywhere in a bulletproof vehicle. But, my wife said we should. And, I’ve been married long enough to know that I should listen to my wife. In any event, she was right. We have 3 young kids and one on the way. To make matters worse, two days earlier, Rabbi Michael ‘Miki’ Mark z’’lb was gunned down by Palestinian terrorists, while driving on this very road. The drive itself was short, somewhat claustrophobic, but mostly uneventful.

Pulling up to the road beside the house where just three days ago, Hallel Yaffe Ariel, z”l, was brutally murdered, my heart suddenly began to race. I felt as if my heart was going to explode with emotion. Yet, there I was, holding my pregnant wife’s hand, walking down a dirt road towards the Ariels’ home. 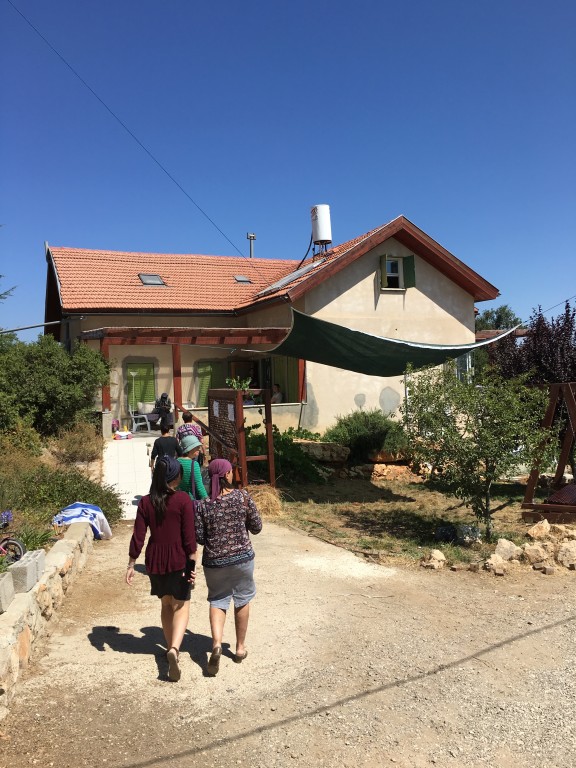 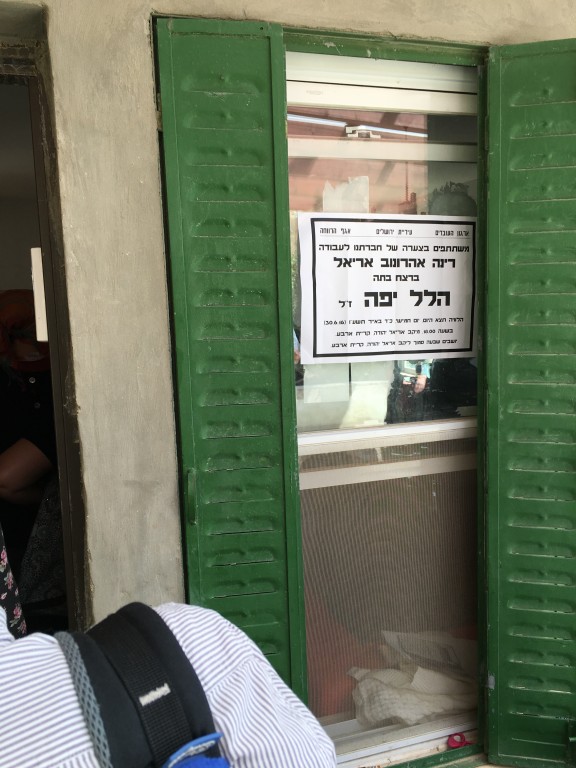 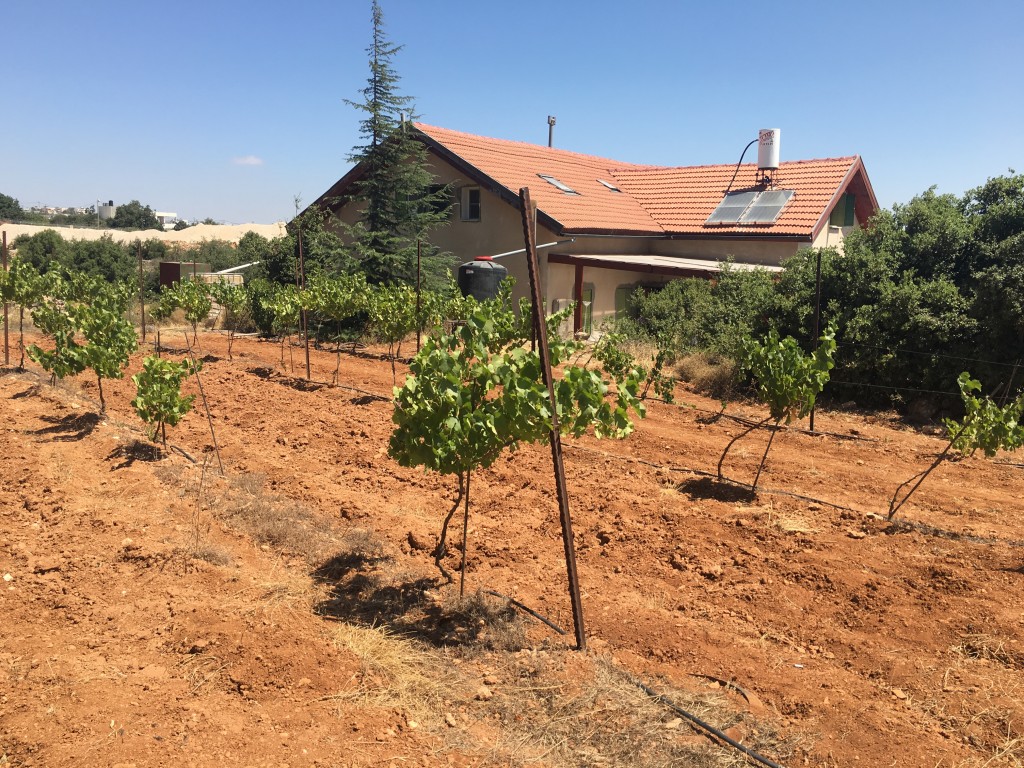 I was completely overcome with nerves, sorrow and a great determination to let the family know that we care. A small and modest vineyard adorned the side yard, and an expansive view of the Hebron Hills adorned the background of this simple home. People were filing in through the front porch of the home. Everyone was somber and quiet. All you could hear was Hallel’s older brother sitting on a plastic chair at the entrance, barefoot, and sobbing uncontrollably.

The small living room was packed. Chairs lined the room. There were people wall-to-wall. We shuffled our way to the corner where Hallel’s parents were sitting. A few minutes later, we were face-to-face with Rina and Amichai. Rina was standing, clearly overwhelmed, yet grateful, for the number of people showing up at her home to express their love and sorrow. She welcomed each guest, one-by-one, asking each, “Mi eifo?” – Where are you from? Each person answered a different city from every corner of the country. It was an amazing sight to see. People driving from all over the country to this home to pay their respects. When she got to us, I said “Miami” – knowing that Rina is originally American. Suddenly, she let out a gasp and a warm smile, “You are from Miami?! You came here to see us?!” “Yes,” I said. “Chevre – guys – they are here from America, from Miami, to see us! Move from the couch so they can sit!” Amichai reached out to me, arms open wide, and hugged me with incredible strength. He said nothing. I said nothing. But, words were completely unnecessary.

Hallel’s mother, Rina, insisted that we follow her to the front porch so she can tell us about her daughter. Along with another 15 or so people, we stood in a circle on the Ariel family’s front porch, in Kiryat Arba, just three days after Hallel was murdered just beyond the door. My heart was racing and my hands were shaking as I listened to Rina’s words.

“I want to share these words in English, because Hallel loved English.” Her mother explained. “I want to share with you some words about the life of my daughter.” “She loved to learn.” “We want you to remember her this way. A happy girl. A girl of light. A girl who lived here and was happy.” “She wasn’t afraid to live here. This was her home.” “She felt secure.”

She spoke for 20 minutes about her daughter’s life. She explained how Hallel loved to tend to the small vineyard outside her home with her father. If she weren’t talking in past tense, Rina would have sounded just like any mother, anywhere in the world, gloating about her young daughter. But, she wasn’t. She was talking about her 13-year-old daughter who was stabbed to death in her bed, just three days prior. This reality hung over the group like a heavy cloud of smoke choking us all.

About the terrorist who murdered her daughter, Rina asked, raising her voice slightly for the first time, “WHO WERE HIS TEACHERS?! WHO WERE HIS FRIENDS IN SCHOOL THAT TAUGHT HIM SUCH HATRED FOR HIM TO GO INTO A ROOM AND KILL A 13-AND-A-HALF-YEAR OLD GIRL IN HER BED?!”

Silence. Everyone stood in complete silence.

As I stood there, listening to this grieving mother desperately telling the story of her daughter’s life, cementing her daughter’s legacy in the history of the Jewish people, my hands began to shake uncontrollably.

How sick can someone be to kill a 13-year-old little girl while she sleeps in her bed?

How is it that we are living in a time that such an atrocity even occurs?

How is it that we are living in a time that the worldwide media barely covers the story, because the girl was living in a “settlement?”

How is it that there are those who have the gall to say, “well, she shouldn’t have been living there,” or even, “this is a natural consequence of an ‘occupation’?”

If you are nothing less than 100% incensed by this murder. If you do anything but fully and unequivocally condemn the terrorist and all of those who support him and celebrate him, then you must re-evaluate yourself, and what you stand for.

As for me, I approached Rina, knelt down and told her — with tears in my eyes — “Although you may be living in this home at the edge of Kiryat Arba, and you may sometimes feel that you are alone, please know that we are here from Miami to tell you that you are not alone. We are with you. The people of Israel are with you. The Jewish people are with you. From the Golan Heights to Tel Aviv to Eilat and all the way to Miami, we are all with you.”

At the end of the day, what else can we do, but stand together?