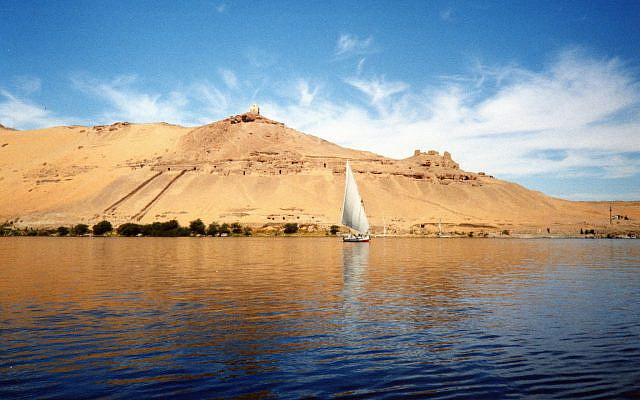 Before bringing the Plague of Blood, G-d tells Aharon to stretch out his staff over the different bodies of water in Egypt. He tells Aharon, inter alia, to put his hand over the naharot and yeorim of Egypt. Rashi (to Ex. 7:19) explains that nahar refers to the type of river with which we are familiar, and yeor refers to a man-made irrigation canal that brings water to faraway fields. This implies that a yeor is a man-made river, while a nahar is a naturally-occurring river. However, this assumption is belied by the fact that the Nile River is a called a yeor, yet the Nile River is one of the four original rivers that flowed from the Garden of Eden (Gen. 2:11), and cannot possibly be a man-made river! So what’s going on here? What is a yeor and what is a nahar? And, for that matter, where does the word nachal (which also means “river”) fit into all of this?

In order to resolve this contradiction in terms, Rabbi Malkiel Tzvi Tannenbaum of Lomzha (1847-1910), author of the responsa Divrei Malkiel, proposes that the words nahar and yeor can be used in two different ways. When the words nahar oryeor appear on their own, both terms can mean both a man-made river and a natural river. However, if both terms are used together, then each term assumes one specific meaning that is not included in the other. In other words, whenever nahar and yeor appear side-by-side (like they do concerning the plague of blood), then nahar only refers to a natural river and yeor only refers to an artificial river. But when the terms appear independently, they are both synonyms for any type of river.

The Malbim (to Jer. 46:10) explains that a yeor is a river which tends to overflow, thus allowing water to flood the surrounding area. A nahar and nachal, on the other hand, are rivers which do not overflow, but simply push all its waters along a certain forward current, but not past its river banks.

In another discussion of these three terms, the Malbim (to Isa. 19:5) explains that a nahar is a river that is shallow, short, and narrow, while anachal is a wider river, but it too is not deep. A yeor denotes an even smaller stream. In this discussion, Malbim again notes that a yeor differs from the other two types of rivers in that a yeor tends to overflow, while the other types of rivers do not. We will explain the etymological basis for this soon. Most instances of yeor in the Bible refer specifically to the Nile River in Egypt, which acted like this, although Malbim concedes that in two or three places the term yeor refers to a different river.

The word nachal refers to both a “river” and a “valley”. Some explain the connection between these two meanings is that a nachal is the type of river that causes erosion, which thereby creates a valley a la the Grand Canyon. In English, we call this a wadi (a word borrowed from Arabic). Others explain that a nachal is a seasonal river caused by rainwater flowing down from the mountains, while a nahar is a river which continues to flow the entire year.

Rabbi Shlomo Pappenheim of Breslau (1714-1814) explains in his work Cheshek Shlomo that the two-letter root HEY-REISH is used in different words that refer to something which “sticks out”. For example, har is a “mountain”, herayon is “pregnancy”, and yuharah is “haughtiness”. Based on this, he explains that the word nahar is also derived from this root, as a nahar is the type of river into which smaller streams flow, making the bigger river “stick out” vis-à-vis those tributaries.

Rabbi Pappenheim also writes in Cheshek Shlomo that the letter REISH itself denotes “throwing” or “shooting”, and different roots that use the letter REISH are derived from that. To that effect, he understands that the word yeor is derived from the letter REISH. The waters of a yeor shoot downstream as though being “thrown” by the forces of nature. Rabbi Pappenheim explains that yeor differs from nahar in that it refers to a river whose waters flow with especially violent force, and in the Bible it is only used to refer to the Nile and the Tigris rivers. However, Rabbi Pappenheim admits that a borrowed meaning of yeor — which also appears in the Bible — is a manmade irrigation duct, which does not actually refer to a river per se but to its artificial tributaries. In light of what the Malbim wrote, we can explain that the word yeor recalls the fact that its waters tend to overflow past the river’s banks — giving the illusion of the river itself “shooting” its waters outwards.

Rabbi Shlomo Aharon Wertheimer (1866-1935) explains that the term nachal only applies to a river which flows into a sea, as it says, “All the nechalim go to the sea” (Ecc. 1:7), but not to any type of river. Indeed, Rabbi Shlomo Pappenheim in Yeriot Shlomo explains that the root of the word nachal is CHET-LAMMED, which refers to “circular motion” and aptly describes the cycle by which a nachal empties out into the ocean, and the waters of the ocean, in turn, flow back into the river.