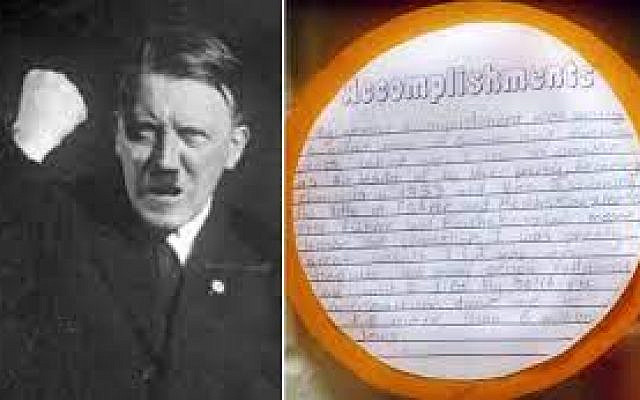 Several years ago, I heard the saying, “wait, what?” for the first time. And it is a saying that now drives my own thoughts and decisions both personally and professionally. The concept — while simple in nature – is extremely powerful. With so much at our fingertips these days, we are  used to and expect instant gratification.  Yet there should be an alarm bell inside all of us when listening to something that is questionable, controversial, or does not seem quite right to stop and say to ourselves, “wait, what.”

Over the weekend, I was told about a developing story from a neighboring suburban New Jersey town in which a 5th grade class was assigned a project on researching, writing and then presenting on a historical figure. One of the students chose to do her assignment on Adolf Hitler.  Following the structure of the assignment, she listed Hitler’s “accomplishments,” with the following: “how great was I?” and “my belief in anti-Semitism drove me to kill more than 6 million Jews.” She then dressed as Hitler and presented to the class. This clearly hits a nerve and raises a variety of concerns.

From what I have heard, the assignment was done several weeks ago and for a variety of reasons, it is just coming to light right now. With it becoming known, there has been a storm of comments against the young student, her parents, the teacher, staff, and administration at the school. Although the town is nearby, it is not exactly in the area that I cover in my role as the Director of Holocaust Education for the Jewish Federation of Greater MetroWest NJ but since it is in the same state, I have gotten a barrage of calls, emails, and texts about the situation, mainly pointing out the obvious concern over what took place.

The past few weeks have been filled with fear and heightened tensions and emotions over the recent rise in anti-Semitism. I and so many others in the Jewish community have been struggling to make sense of what has been happening around us and have felt overwhelmed, frightened and even depressed about the lack of support from our friends, colleagues and overall communities.

As my inboxes were flooded with all different comments and thoughts about a Hitler project, my first reaction was outrage as well. And to be honest, it still is. But I am looking at it as a horrible incident in which so many adults, in what should have been a compassionate and well educated community, did not do a full stop and say, “wait, what?”

The assignment itself, according to a parent, was a “character development” on a historical figure in which the student should present as the actual person they chose to study. As a former history teacher and a historian, I could see how it is important to show all different historical figures but…

Wait, what? – a 5th grader doing a project in which they are researching Hitler?! No 5th grader, no matter how mature, or how much they know already from background knowledge has the developmental capacity to research, write and present on Hitler. I have a current 5th grader, and his school did a fantastic unit on the Holocaust this year which focused on the persecution of the Jews, and other victims of the Nazis, as well as highlighting several stories of righteous saviors that stood up and helped those in need. That is the lesson at this age; not the complexities of the mass murderer that is Hitler.

Wait, what? – we have a child coming to school dressed as Hitler?! I adore projects that involve creativity and excitement for the students. And I know that youngsters tend to enjoy getting dressed up and this becomes very memorable. However, in this case, I can’t ever see the joy or enthusiasm for being dressed as the man that enacted a murderous genocide on 12 million people.

Wait, what? – the project is written in the 1st person, so under accomplishments, among several other things, it states, “my belief in antisemitism drove me to kill more than 6 million Jews.” Yes, this is completely factual and yes, Hitler himself would say that this was an accomplishment, but should we, 76 plus years later have our students learning and then displaying it that way? Absolutely not.

Is this a major act of antisemitism on the part of the 5th grader, the parents, the teachers and the administration? I don’t believe so. Yet it was gross negligence on the part of so many adults that are in desperate need of some support on how controversial issues should be taught in schools, because how it is taught could perpetuate antisemitism.

What is so troubling to me in this case is that for a child doing a project on many historical figures, there should precipitate and generate a serious discussion about that person. Many, many figures in history are flawed. We should teach about them, learn about their positives and their negatives. We should celebrate the good and educate and learn about the bad. But we should never, ever have our young people model the negative.

In the case of Hitler, there should be no debate – not ever. Hitler was not flawed. He was evil. Pure evil. When a child as young as 5th grade wanted to complete this type of project on Adolph Hitler, every single adult that knew about it, should have been wise enough to stop and do a, “wait, what?” and then make the decision that this was absolutely inappropriate. A 5th grader should not be researching Hitler on their own, they should not be dressing as Hitler, writing as Hitler, or teaching other students that Hitler had any accomplishments. Yet, “heads rolling”, as one post stated, should also not be the answer.

The parents, the teacher, the administration and the community as a whole, should take a look at the multitude of steps that were failed in the educational system here and work together to fix them. “Never Forget,” has become synonymous with the Holocaust. And that is exactly correct – we should “Never Forget,” all of it. The evil as well, but when teaching that evil, it should be in a well thought out and planned manner and never as dressed as Adolph Hitler, spewing his hatred as “accomplishments.”