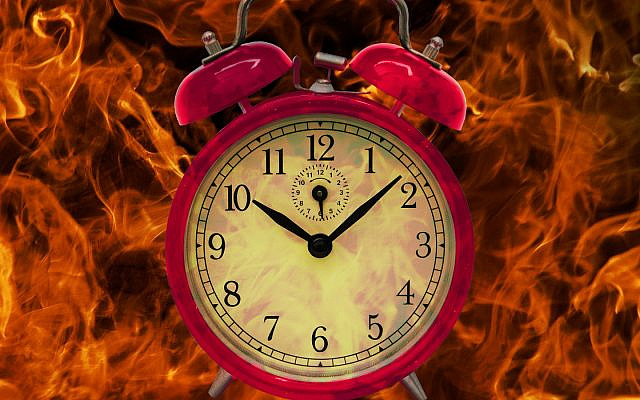 A story goes that a baby was born to a Jewish couple who had movie-star good looks. When the new mom and dad first laid eyes on their new child they were shocked to see a large, Semitic nose. Apparently, they had forgotten that both had teenage rhinoplasties.

While this parable is decidedly not PC, the point is Jews too easily forget their roots. They have become comfortable living in a golden age in America, and they cannot see the signs of unhappy changes. It is what Joachim Fest pointed out in his memoir Not I, when talking about complacent pre-war Berlin Jews. He  warned, “They lost their instinct for danger that had preserved them through the ages.”

Now, added to the well-documented rise (tripling from 2013 to 2019) in anti-Semitism in America, the social unrest, featuring BlackLivesMatter and the anti-nationalism destruction of statues and burning flags, promotes distinctly anti-Jewish and anti-Israel themes. Accordingly, Jews need to look carefully at this disturbing trend, and they should question both how the Jewish establishment responds and how governmental leadership reacts.

Joining the #BlackLivesMatter…upper case B, L, M… movement may seem “woke” given America’s deeply flawed slavery past. But, behind the BLM organization is the malign leadership and fundraising of Susan Rosenberg who was arrested as a terrorist in 1984, convicted and commuted by Bill Clinton. During recent demonstrations-marches-riots, anti-Jewish hate has been recorded: “Israel, we know you, you murder children, too,” “Death to Israel,” “Death to America” and “From Gaza to Minnesota”, “Globalize the Intifada.”

Yes, black lives matter … lower case b,l,m … and, in spite of electing a black president, our country does have more work to do to ensure the equality of opportunity and justice for all. Somehow though, the righteous history of Jews battling for Civil Rights is minimized or even forgotten. The image of Dr. Martin Luther King,  Reverend Ralph Abernathy, Dr. Ralph Bunche and Rabbi Abraham Joshua Herschel walking together at the 1964 march in Selma, Alabama needs to be remembered.  The efforts of Jewish lawyers who worked for voter rights and created the NAACP, and the sacrifice of slain Jewish boys dramatized in the movie “Mississippi Burning” can’t be ignored.

Now, let’s examine the threat of universalism and anti-nationalism. Monument destruction, flag burning and cancel culture revisionist history is overtaking America. It is a self-righteous, naïve absolutism holding United States (and Israel) to unrealistic standards.  Reasonable people need to apply a relativism to judge American (and Israeli) values and practices versus the rogue’s gallery of Islamic countries, Communist regimes, and dictatorships scattered across the globe. The great human journey surely includes mistakes and cruelty, but some measure of appreciation should go to those sovereign enterprises that pursue justice, albeit never fast enough.

There are many dozens of Christian countries represented  with crucifix-styled flags and there are dozens of Islamic-majority country all flying banners embossed with crescents and scimitars. Israel is the lone Jewish nation, and the only one displaying a Star of David. Hyperbolic anti-nationalism calling for unrestrained border policies, homogenized populations and a willingness to castigate particularism is a direct threat to little Israel.

Under-informed Jews hunger to be included in the fashionable “intersectionality club.” They support other challenged Native peoples while ignoring  their own truly indigenous, middle eastern Israelite ancestors. The Women’s March, hijacked by the virulently anti-Semitic Linda Sarsour, excluded Jewish representation, and that ought to be fair warning of the deception within the movement. Should we expect culturally elite Jews to press for John Lennon’s “Imagine” to replace “The Star Spangled Banner” or “Hatikvah?”

On the college campus, young Jews face a barrage of pro-Palestinian and BDS hatred. Organizations like StandWithUs work to whack-a-mole firefight well-funded anti-Semitic and anti-Israel forces who flourish among permissive administrations and faculties.

So, how is the Jewish establishment responding to this wicked brew of issues? The threats are so broad-based, so insidious and so hard to remedy that we need a coordinated, “all hands on deck” reaction. A review of recent activities at Jewish organizations suggest more work needs to be done.

–Jonathan Greenblatt, CEO of ADL, recently cozied up to the proven liar, anti-Semite and opportunist agitator Al Sharpton. There are many wonderful Black leaders that warrant support, and the Jewish world surrenders its credibility when these foolish choices are made.

–The Conference of Presidents of Major Jewish Organization nominated Dianne Lob to be their next leader. Her past leadership at HIAS, which substituted its original focus on Jewish immigrant needs with Muslim immigration, should have been reason to look elsewhere.

–Several JCC’s, as part of their Jewish Book Festival, invited entertainer Chelsea Handler to present her new book at multiple locations. It turns out that Handler has lauded the rabid anti-Semite Nation of Islam leader Farrakhan for his “powerful” video. She said, “I learned a lot from watching this powerful video.” Her Nazi grandfather would have approved.

After two millennia, where Jews have been the “poster child” for discrimination, now #JewishPrivilege is the accusation. Jewish lay and professional community leaders must courageously move past the latest fashionable media promoted social justice outcry, and aggressively defend their constituencies. To quote Hillel, “If I am not for myself, who will be for me?”

Lastly, beyond the extremely polarized rhetoric, defunding of police, police-free protests and indulged autonomous zones, anarchy and will only embolden our enemies. Jews need to lobby on both sides of the aisle for legislative and physical support. Jews can’t afford partisanship to limit political outreach and alliance.

Yes, Jews too need to wake up.