The Blogs
Adam Brodsky
Let's discuss stuff
Apply for a Blog
Please note that the posts on The Blogs are contributed by third parties. The opinions, facts and any media content in them are presented solely by the authors, and neither The Times of Israel nor its partners assume any responsibility for them. Please contact us in case of abuse. In case of abuse,
Report this post. 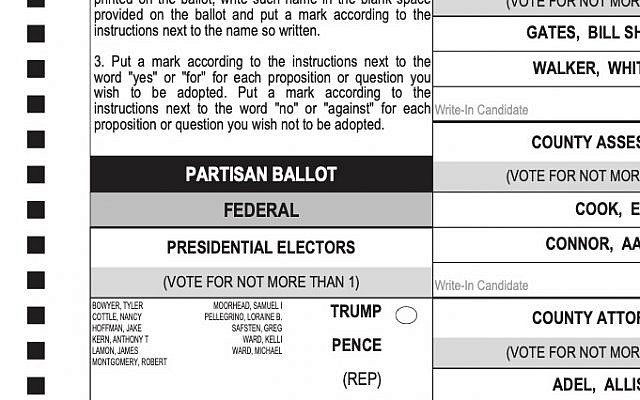 Part of my own mail-in ballot for the US election. (Courtesy)

There is an election in the US approaching.  What would happen if just before voting each person had to actually say out loud:

“I, so and so, solemnly do affirm and hereby publicly declare that although my decision in this election is about to be made, I freely and without coercion accept that the theoretical best decision may in fact be something different from what I personally believe.”

This is not as easy as it might sound.  It is not so easy to believe both at the same time that you, after carefully thinking it over, think that X is best, and yet at the same time understand that the true Best Path might in fact be something different.
Why is this?
Let’s start with three definitions.  First we have our own individual decision.  We’ll call this Individual Opinion.  Everybody has one.  Some are the same as others, some are different, but everybody has their own view of what is right.  Next, we have the theoretical best decision – the “God’s-eye view” of what would actually be best.  We’ll call this the Best Path.  This is an unknown.  We all know it exists, we are all striving to get as close to it as possible, but nobody knows what it actually is.  Yet we all believe that it is there, somewhere. And then there is the actual collective societal decision; what actually ends up being done.  In a simple sense we can think of this as the election results.  Or what actually ends up occurring after all the arguments are done, all the court battles are fought and the appeals exhausted.  It is what society finally does in the end.  We’ll call it the Actual Path.  It will agree with some Individual Opinions and will disagree with others.  We hope it will be close to the Best Path but we are never quite sure.   So to review, we have a bunch of Individual Opinions, a single Actual Path, and one theoretical Best Path.
As each of us performs the calculus which allows us to arrive at our own Individual Opinion, the data which is available to us is not the sum total of all possible data, and the way in which we each analyze the data is not the only way that it could be analyzed, and our biases are not the only possible biases that one could have, etc.  So that the ultimate “God’s-eye view” – the Best Path – might not always line up exactly with what we perceive to be the best path in every instance.  In fact, one might go so far as to say that it would be very strange or coincidental or weird if in fact the two ever did line up completely.  (Unless, of course, you happen to be a prophet…)
So for example, if there are 10 issues that make up the current political agenda (I actually counted about 60 issues on the current Democratic Party Platform and about 90 issues on the 2016 Republican Party Platform, which was readopted without changes for 2020) and you think about each one and come to your own conclusion on each one, then it would be very odd, even unreasonable, to expect that your Individual Opinion would agree with the Best Path all the way down the line on each of the 10 issues, (or on each of the 60 Democratic issues or on each of the 90 Republican issues).  It would be much more likely that you would be “correct” on some issues but not on others. That would just statistically make the most sense.
Now I suppose you might argue that if your position on the 10 issues all stem from one certain world view (like Democratic or Republican), then if you have the correct world view you’ll get to the correct decision on each of the 10 issues (or on the entire party platform). But that may be oversimplifying things a bit.  For one thing, much of politics is simply local and not beholden to a certain worldview, and second, a lot of political issues are not actually the result of the logical extension of basic principles but rather an amalgamation of the opinions of various special interest groups such that there is often not a unifying logic to the various talking points held by political parties. And who’s to say my so-called “world view” is correct at all?  And if it happens not to be, then according to my own “world view” logic I’d be dead wrong on every single issue – all 60 of them or all 90 of them.  Maybe I’m OK with a 50-50 chance of being correct (if there are only two parties)  – in Vegas those would be pretty good odds.  But are those really the only two world views? What about the Green party? The Libertarian party? The Socialist party? (or Likud, or Blue and White, or Meretz, or Yamina, or…) Now your odds of not being wrong on every single issue are down to only one in five.
The point is that everyone must make the best decision they can while at the same time realizing that their decision may or may not be the same as the theoretical Best Path.
This type of thinking – knowing that despite your trying as best you can to figure things out, think things through, and come up with your honest best position on each issue – despite all that, you still might not actually get to the Best Path, is not only counterintuitive, it can actually be totally paralyzing.

Because if you can’t even trust your own internal decision making then what’s the point?  Why even try at all?  Why go through all the mental effort if you’re just going to be wrong half the time? It would seem that you could save yourself a whole lot of trouble just by flipping a coin.  (hmm, now there’s an idea…  😉 )

But the point is exactly that in order for the system to work, we each must think it through for ourselves, come to our own decisions, hash them out with others in public debate and then collectively decide the course of action to take, from which the Actual Path emerges.  In every instance, this collective result, the Actual Path, will agree with some people’s position and disagree with others.  But even though we all know that our Individual Opinion may be flat wrong some of the time, we also know that without going through the exercise together, no decisions can ever be made.  And it also means that when the Actual Path disagrees with our Individual Opinion, we can intellectually be OK accepting that dissonance – that we don’t have to be so incensed by the disparity that we call the other side murderers and work tirelessly day and night to undo the decision that has been made in every instance of disagreement.
I was recently told a story about a friend who will be voting against President Trump in the upcoming US election. I was told that this friend made the statement that because of Trump’s “no-mask” policy, he is responsible for the murder of 220,00 people. This person is a reasonable person. And they used the word murder.  I don’t doubt that this person honestly believes that their position is correct. That is to say, were Hilary Clinton to have been the President instead of Donald Trump that the country would be better off and that the COVID-19 pandemic would have been handled in a different, possibly better, way.  Or that if President Trump would have been removed from office mid-term in a Senate trial following House impeachment, that America would be better off.  But to be so convinced of your position that you are willing to call your opponent a murderer – that is first and foremost hubris.  And beyond that, it is an illustration of how our own polarization will in the end tear the country apart.  Because if half a country considers the other half to be actively supporting murder…well, that’s pretty hard to walk back from.
On the contrary, simply acknowledging that a theoretical Best Path exists, and that we can never know if it is the same as our Individual Opinion – acknowledging that the Best Path may in fact sometimes be closer to our opponent’s position – indeed that the simple law of averages states that the Best Path must be closer to our opponent’s position at least some of the time – the simple acknowledgement of this fact might just be the first step on that very long walk back.
About the Author
Adam Brodsky is an interventional cardiologist who made Aliyah with his wife and four children in 2019, from Phoenix, AZ. He holds a combined MD/MM degree from Northwestern University and the J L Kellogg Graduate School of Management, and a Bachelors degree in Jewish and Near Eastern Studies from Washington University in St Louis. He is saddened by the state of civil discourse in society today and hopes to engage more people in honest, nuanced, rigorous discussion. An on-line journal about his Aliyah experience can be found at aliyah.move2israel.com
Related Topics
Related Posts
Comments