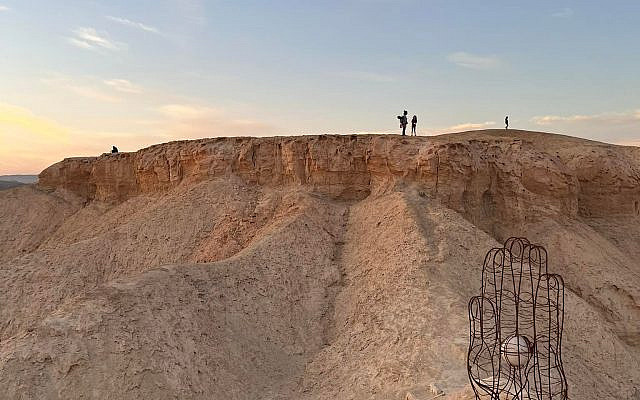 Desert Landscape at the Peace Conference in Arava

“Mom, can you remind me of the ending of Voyna i Mir? I never finished it…”

It was around 10am when I entered the kitchen where Sasha and Suli’s guest, a Dutch couchsurfer, were smoking. I immediately scolded them as Suli who was at work – whose place I stayed at dozens of times before – does not allow smoking in his apartment. Sasha looked at me severely and replied in Russian: “Then let’s get out of here, she is getting on my nerves. Oh and by the way, the war has begun.”

We had arrived the night before in Hebron on our way back from a three-day peace conference in the Arava Desert; Sasha had said that we should balance out the week of peace with a visit to the most conflicted city in the West Bank.

Our Holy Local Aliens core group, that includes Israelis, Palestinians, and internationals had been invited by Ehvam, Buddhist centre led by Lama Dvora, their spiritual mentor. I had attended the same event two years ago right before the COVID outbreak, and I’ve been to a few peace conferences in my life but for Sasha, this was a milestone. Ever since he joined the Aliens last June, his “how Zionist are you” test score dropped from 10 to 6. And while entering area A with his car was still out of the ordinary for him, this three-day long spiritual retreat was pushing him out of his comfort zone. Indeed, not all ears can bear the words ‘peace’ and ‘love’ being uttered in every second sentence.

On Thursday morning, the day Russia invaded Ukraine, we went to the first fancy café we could find in downtown Hebron and ordered coffee on sand, velvet cake, some chewy dark chocolate candy and Swiss rolls. The waiter who brought them couldn’t resist asking where we were from, while entering the WiFi password for us.  “Ana min Bulgharia,” was my usual West Bank answer, while Sasha wrinkled his forehead and took on a heavy tone in his voice, so that I almost thought he was crazy enough to say ‘Israel’, when he said, “Ukraine!”

Sasha made aliyah from Odessa a few years ago and earlier that day he woke up in Hebron, to the news that Ukraine was declared a war zone. “Wow, Ukraine!” The waiter exclaimed, “Palestine is with you!”

“He has more empathy than Suli’s couchsurfer,” Sasha said and revealed his urge for leaving the house this morning. Apparently, when Sasha was reading the news about Putin invading Ukraine, the Dutch girl commented that now the whole world will care about Ukraine, less about Palestine.

“Wars can be so competitive!” I said. 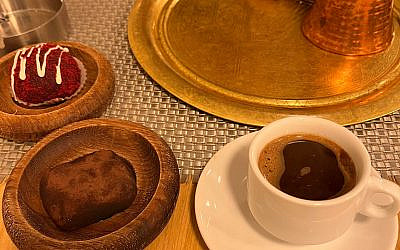 After a while, my sister Masha joined us along with our local Hebronite friends who had come to say hello and hear more about the peace conference. Anyhow, Sasha was given the spotlight because of the news and everyone wanted to hear his perspective. He on the contrary didn’t feel talkative and just looked sad and worried for his hometown and all the friends he had left behind.

In an attempt to cheer everyone up, I shared a funny story from the conference. So there was this elderly woman who asked our alien from Jericho, Ahmad, where he is from. He replied “Guess…” but instead, she heard “Gaza”. Seeing how excited she became to meet a real Gazan, Ahmad decided not to disappoint her. She then asked him how he managed to come to Israel. Ahmad thought for a second and said, “by smuggling.” That word wasn’t familiar to her, so she asked him to explain how. Ahmad then displayed some wavy hand gestures, imitating swimming, climbing or even crawling.”

Being so happy to have met someone from Gaza, the woman shared the news with everyone around her soon to find out that it was not true. She did not seem pleased with the prank despite Ahmad’s attempts to make it up to her by telling about his relatives in Gaza. She told him that she was leaving the conference out of disappointment and that peace cannot be achieved with lies like this.

However we, the fifteen aliens, stayed for all the three days of the conference. We listened to Lama Dvora’s teachings on inner peace and how to open one’s heart, and other religious leaders and experts spoke on trauma and forgiveness. Although what we enjoyed the most were the Alien conversations and jokes that we shared together. Noami with her talmudic logic noticed while chilling by the small lake, “So it says that swimming is prohibited, that means it’s possible, right?”

Or, when our hafla (party) loving Mousa, who had no patience for lectures, looked in through the window of the hall at the few attendees inside and said “These are the last survivors of peace.” 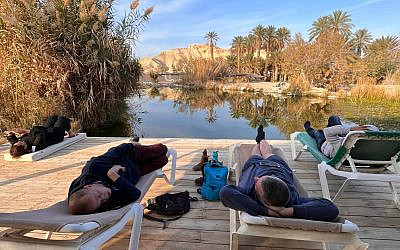 In the fancy Hebroni café, we were warming up to a debate, ahead of another tray of velvet cakes.

“So Sasha, how do you feel about Ukraine being occupied? Not a nice feeling, right?” asked Samer, our Hebroni Alien with an unmistakable dose of sarcasm. Sasha, who still had a higher score than I on the “How Zionist are you?” test, replied with restraint that the two should not be compared, as he offered some historical context to strengthen his argument. Samer didn’t agree.

I could feel that we were inching towards a storm of endless arguments, so I interrupted again with more fun desert flashbacks.

For us Aliens, this peace conference was the bonding retreat that we had dreamt of  but couldn’t afford, after the last two and a half years of hard work. Between exciting lectures on peace and love, dancing, and meditating, we had the time of our lives.  We even argued on whether or not the vegan food was great (yes, it was!), or whether our alien dance workshop was too short, and why we couldn’t wake up for a Kundalini yoga session with a girl from Beit Hanina, whom we enrolled for the Aliens straightaway. 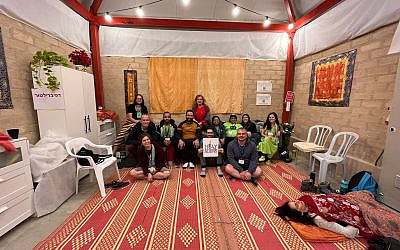 It’s always a battle with oneself to leave the cosy interiors of fancy Hebroni cafes, even more so on a gloomy afternoon.

We were saying our goodbyes, when my friend Ghadeer, a literature teacher and philosophy lover mentioned that she was recently teaching “War and Peace” in her class, and what she valued the most about Leo Tolstoy was how he, as opposed to historians, believed that the movement of nations is caused not by powerful leaders but by the actions of individuals. She also philosofied: “Conflicts give us a purpose in life. We humans need a battle, a struggle, or a conflict, to keep us going.”

This statement sparked our last discussion on whether or not people are really given the choice to pick their battles. Indeed, on the one hand as Tolstoy claims every human can affect the course of a global event, but on the other, we see how we can be dragged into a war led by psychopathic dictators.

There is a saying in Russian, “Golos v Pustyne” (voice in the desert), which means a voice that no one can hear. I wonder if our three-day peace conference, with all its prayers, meditation sessions, and even that sublime “La ilaaha illAllah” Sufi dance circle was just a voice in the desert?