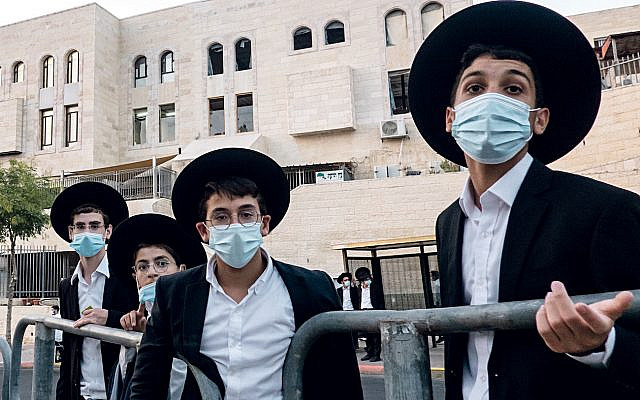 I imagine most people who read Jewish News are in Britain. But think for a moment of the benighted denizens of Melbourne, one of the biggest cities in Australia, and still, all these months on, subject to the most draconian of lockdowns because of the pandemic.

Even though restrictions are gradually being lifted in the regional areas of Victoria, the province of which Melbourne is the capital, Melbourne itself is still harshly policed. Its citizens are forbidden to leave home at night between 9pm and 5am.

They can’t leave home unless they are shopping for essentials. They can only exercise for up to two hours; those who can’t work from home need a permit to go to work.

All pretty grim, right? I have at least one family member in Melbourne who is metaphorically, and for all I know actually, tearing his hair out.

Which is why the behaviour of some parts of the Jewish community is absolutely incomprehensible. In the past month, two actions by Jews in Melbourne have hit Australian headlines.

First was an engagement party, which we know about because a video of a crowded room, full of unmasked guests, went viral on social media.

A laughing and joking crowd hears the intended bridegroom say: “Clearly this is legal, because this is a group therapy session.” The event was hosted by one of Melbourne’s most prominent Jewish families, who, presumably, were able to shrug off a fine of $300,000 (£159,000).

Despite absolute fury from many members of the Jewish community, it didn’t take long before lockdown rules were being flouted again, this time over Rosh Hashanah. Victoria Police reported that up to 100 people breached the regulations by entering a synagogue in the south-east of Melbourne. Each adult, the police said, would be issued with a fine of just over $5,400 (£2,857) each.

What is it, I wonder, with Rosh Hashanah, that some see it as an opportunity for breaking the law? In Israel, it’s been reported, dozens of men – it’s always men – who went on the annual Rosh Hashanah pilgrimage to Uman, Ukraine, used forged negative test results and are now said to be infected with coronavirus.

Police rounded up the infected individuals as they returned to Israel, chucked them into ambulances for mandatory quarantine, and have promised that full prosecutions will take place.

Israel’s Border and Immigration Authority believes that dozens of those who tested positive in Kiev had flown home with false negative tests, opting to take the tests in Ukraine where they hoped conditions were looser, rather than Israel.

Prime Minister Naftali Bennett is said to be livid at the behaviour of the Uman pilgrims, but for some it will already be too late, and not all the earthly laws will be enough to combat the renewed spread of the Covid virus. Fortunately, it is not known to us, at this season, who will be inscribed in the Book of Life and who will not.

Undoubtedly, there will be those engagement party guests who will sail through unscathed, and use that as a pointer that the lockdown restrictions are all a great fuss about nothing. Equally those who choose to remain unmasked and unvaccinated and who, somehow, beat the odds, are likely to crow about their decision.

But for the majority of us, the behaviour of some is not just life-threatening but could also lead to a whole new wave of anti-Jewish, or anti-strictly Orthodox, reprisals.

I hope they think it’s worth all the lying, the forging, the evasion and the fines: but to be honest, that word “think” does not appear in their vocabulary.