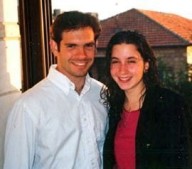 In the last hours of February, 2016, I want to pay tribute and say a prayer for the Aliyah of a neshamah who was taken from us twenty years ago. Sara Duker, a sweet, smart and funny girl, who I knew so briefly during high school, was killed in a bombing of the number 18 bus in downtown Jerusalem in the last days of February of 1996. In those moments, it didn’t matter that she had a life, and goals, that she wanted peace and happiness, or that she was with her fiancé, Mathew Eisenfeld, on that bus. It only mattered that she was Jewish and visiting her homeland, and that some terrorist yimach shemo embraced death over life, and destruction over any compromise that was offered.

When it happened, I was working in New York, for a Jewish school, but when I told my boss that I was taking time off for the funeral he said something like it’s nice that I want to show solidarity, but there would be plenty of people and it wasn’t really necessary for me to go. I had lost touch with Sara, but just then all that mattered was that she had been my friend, someone I knew, and the bombings and terrorism at the time (which I believe was not even dignified with the appellation Intifada) had just gotten real for me. I looked at him and said “She was my friend,” and he shut up and let me go.

Why is this important? And why does my heart ache for what she could have been, what she could have had now, twenty years later? Because my boss was wrong. Because it IS extremely important to show solidarity, even if you didn’t know the person at all. Because when you put a face on the tragedies, it gets real. And we need this to be real for as many people as possible, so we can get it to matter, so we can get it to stop.

Now I live here, in what’s turning out to be the epicenter of many attacks and tragedies, but if you compare articles from back then (1996) to now, it’s like time has frozen or stood still — constant agony then return to ‘normal’ life, terror on top of terror and tragedy piled on pain, and it still hasn’t stopped.

I have been feeling sad and angry and lost, some of which is personal, but so much of it has to do with the ongoing difficulties that we face daily. We all do our best to fight just by doing what good we can, by bringing soup or warm clothing to the soldiers who protect us or by supporting a play, going to rallies, whatever it takes. What I want to know is what will it take? What will it take to downgrade the tightened security, to remove the new (and awful) metal detector at our shopping center, to get the violence to stop?

Not that I’m surprised, but sometimes (more frequently than not, of late) I read articles about what is happening here and I have to say, WTF (NOT Wednesday Thursday Friday). Why? Why? Why is the world *absolutely* insane? Why can’t they see that BS BDS is only harming any possible peace here, by taking away jobs that would go far towards multi-cultural peace relations (where did I learn to say “Shukrän” and “Äfwan” except my friendly cashiers and counter-workers at the Gush Rami Levy?) like we can see in this SodaStream video?

And why does this ridiculous article NOT highlight for the world how the heads of the “Palestinians” only want to funnel money away from those who need it and towards more war and destruction?

And why do they keep saying ‘the violence’ like WE are the ones who want it to keep going, like we are doing anything more than defending our own lives?? A man who was killed last week was the son-in-law of a teacher in my school, the husband of a woman in another local school, and the father of children who will now have to figure out how they can live without him, as well as a baby on the way who will never know his touch. And yet, one of the most awful things about the way he was killed was the fact that it was a soldier, one of our own, trying to stop further bloodshed by the terrorist yemach shemo, whose bullet found its way to Eliyav Gelman’s body and killed him.

My husband and I even discussed an ongoing topic — do I want to learn how to shoot, to get a gun — because of this. Well, do I? At this time, I couldn’t even answer that question. What if it was my bullet that killed not a despicable attacker, but a Jew, an intended victim? How could I live with that? The family of this fallen hero, Captain Eliav Gelman, says he would have wanted the soldier whose bullet it was to know that he does not blame him, but encourages him to keep doing everything he can to protect innocent lives. I have no answers here.

Going back to the article about Iran giving money to the “victims of violence.”  Who are these victims? Families who have raised and encouraged their impressionable children should not then be paid as VICTIMS when these same, poor, indoctrinated vilde chayas go out and attack unarmed security guards and young women standing at bus stops, or mothers in their own homes.

This wave feels unending, and sometimes I feel like I’m going to drown in it, and never find the beach. So that we don’t have to keep ‘wondering what might have been’: for Sara and Matt, for Alisa, for the Fogel family, for Dafna, for Ezra, for Rav Yakov, for Eliyav and for so many others, zichronam l’vracha, from then until now, may we find the strength to stand against the tide and bring peace home.