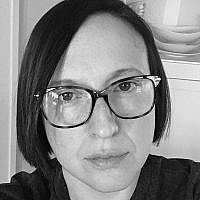 The Blogs
Masha Kisel
Apply for a Blog
Advertisement
Please note that the posts on The Blogs are contributed by third parties. The opinions, facts and any media content in them are presented solely by the authors, and neither The Times of Israel nor its partners assume any responsibility for them. Please contact us in case of abuse. In case of abuse,
Report this post. 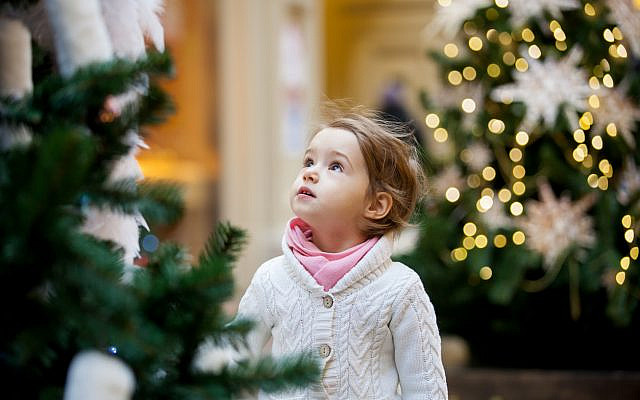 Illustrative. A girl looks with wonder at the beautifully decorated Christmas trees in the shopping mall. (iStock)

I met my husband in Chicago, at a Chanukah/Christmas party, where the guests were a culturally diverse group of hungry graduate students who devoured latkes and eggnog with equal gusto. Sam and I smoked, drank, and flirted on the porch. We didn’t care what we were celebrating.

Once we moved to Ohio and had kids, we realized that to maintain a Jewish identity in a predominantly Christian community, our holiday traditions must include resisting the pull of Christmas conformity. Here are some of the ways we have actively avoided celebrating Christmas for the past nine years.

1. The Santa-evaders
When the kids were just a few months old, we decided to bring them to the Oakwood shops’ Christmas Bazaar. Well, we called it a “Winter Bazaar.”

In the first year of the twins’ lives, everything mattered. Seeing holiday festivity was a “must-do, first-ever” milestone, but we didn’t want them getting used to experiencing Christmas, lest that led to celebrating Christmas.

We carried them in their car seats from store to store, pointing out the colorful lights, the hanging ornaments, and the paper snowflakes. “Take in that secular seasonal celebration, kids!” They looked on in that unimpressed way that babies do when adults attempt to force-feed them wonder.

We should’ve known that Santa would be lying in wait in one of the stores. But we didn’t, and had no plan for when my husband, Sam, noticed — “just a dude in a red suit and a fake white beard.” Santas traditionally stay put in a designated corner. But this one lurked about, indiscriminately spreading Christmas cheer all over the place.

Sam and I locked eyes. We were thinking the same thing. Must. Prevent. Early. Childhood. Santa. Imprinting. As “Just a Dude” approached us, no doubt giddily anticipating our children’s amazement, we performed a series of synchronized moves with our tiny dance partners. Swing your partner’s car seat round and round, away from the smiling “Just a Dude” and sashay, sashay, sashay toward the exit. Not today, Santa!

We high-fived with our free hands once we made it outside, having achieved the impossible paradox of Jewish parenting. Our tiny children experienced the joy and the festivity, but avoided the jollies as well as the merriment.

2. The compulsive chefs
Once our kids got a little older, we couldn’t get away with partaking in Christmas activities and pretending we were just enjoying winter. We needed something to keep us busy on Christmas Day: mostly to reassure us that we were not hiding out, but staying indoors with the curtains shut, voluntarily, like people whose ancestors didn’t fear pogroms.

“We’re going to make Russian dumplings. From scratch! And the kids will help me!” Sam declared.

I’ve been exempt from cooking ever since our fourth date — a two-person potluck, for which I made a wonderfully creative version of the Russian potato salad, Olivier.

“The apples give it a nice crunch…” my future husband complimented me, “…and so do the, um, under-cooked potatoes.” 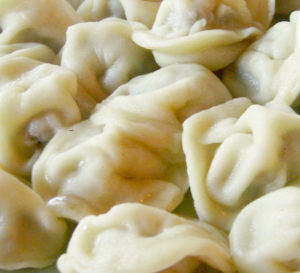 Sam was already pulling out the dumpling press he had sworn to use at least once since acquiring it three years before. I honored his culinary ambition by giving him space.

“I’ll be in our room reading, if you need me to taste anything!” I yelled from the top of the stairs.

Two hours later, Sam and the kids were covered in flour. Little bits of dough clung to the twins’ tiny fingers. Cookie sheets of perfectly shaped Siberian pelmieni lay on the kitchen counters, on the stove-top, the dining table, and the living room ottoman.

“Two hundred, I think. I lost count. Maybe I overdid it. We can freeze them.” Sam sighed. “I am exhausted. Is it tomorrow yet?”

“You should rest now.” I said benevolently. “I’ll take over watching the kids. Where’s that Nightmare Before Christmas DVD?”

3. The lonely skippers
One year on Christmas Day, we decided to go for a walk. Our neighbors’ homes glowed warm with decorated trees and family togetherness. But outside, it was as desolate as the day after a zombie apocalypse. We strolled silently in the cold.

It occurred to me that we should at least appear to be enjoying ourselves. I began to skip.

“C’mon everyone!” We locked arms like the cast of The Wizard of Oz.

“We’re not any worse than you!” our movement vocabulary announced to the rest of Oakwood. “It’s just a day like any other for us, but we’re the kind of family that makes the best of any situation. We know how to take advantage of an empty street for a good ole’ fashioned full sidewalk skip!”

And if any of our neighbors should peek out from their windows in between bites of ham, they’d see just how not left out we felt.

“Look at that adorable, whimsical family. They’re dancing in the streets!” They’d exclaim.

I broke away from the group and got my arms into full swing, breathing in a jogging rhythm. 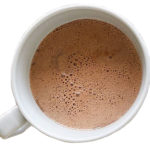 Sam and the kids dutifully skipped to the end of our street behind me, our collective footsteps landing with a heavy thud. It was a long two blocks.

“I’m cold. Can we make hot chocolate?” my daughter implored.

“Hot chocolate! What a great idea!” I exclaimed loud enough so the whole neighborhood could hear. Maybe I imagined it, but I could’ve sworn I spied a thumbs-up in one of the Christmas-lit windows.

4. The mitzvah makers
For the past few years, we’ve participated in a new tradition hosted by Jewish Family Services at the Boonshoft Center for Jewish Culture and Education, in Centerville, Ohio.

We gather for an intergenerational Mitzvah Mission, where we make sack lunches and scarves for St. Vincent DePaul of Dayton, who in turn distributes them to Daytonians without enough food or warm clothes this holiday season.

It’s a great cause and a good place to meet up with friends who will join you for Chinese food afterward. Not celebrating Christmas is a lot more fun as a group.

Recently, when checking out at the grocery store, the nice cashier asked our son what Santa Claus would bring him.

We’ve done something right. Just like their Jewish parents, our kids are rebels without a Claus.

This post originally appeared in the Dayton Jewish Observer.

About the Author
Masha Kisel was born in Kiev and immigrated to Chicago in 1989. She holds a PhD in Slavic Languages and Literatures and currently teaches English at the University of Dayton in Dayton, Ohio.
Related Topics
Related Posts
Comments