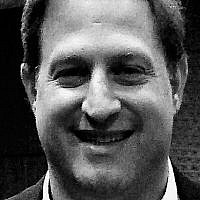 The Blogs
Ari Plost
Apply for a Blog
Please note that the posts on The Blogs are contributed by third parties. The opinions, facts and any media content in them are presented solely by the authors, and neither The Times of Israel nor its partners assume any responsibility for them. Please contact us in case of abuse. In case of abuse,
Report this post.

How we choose to commemorate the Holocaust both informs and reflects as much on our present, as on our past. Without suggesting an equivalence, does the Jewish experience of the Holocaust provide Jews a greater sensitivity to the plight of other minority groups? In an increasingly dangerous world, where we know we must “learn from our history or be doomed to repeat it,” what message of the Holocaust do we want to share with our neighbors and our children?

We live in an age imperiled by Holocaust deniability, profound historical ignorance and an increasing willingness to distort the truth. As such, it is our sacred duty to teach those elements that are exclusive to the Holocaust: particularly, the humiliation, degradation and systematic murder of six million innocent Jews and millions of others.  We also have a responsibility to those whose lives were directly and indirectly impacted by the Holocaust. They deserve our sharing in their anguish and showing our support.

Disturbingly, we are also confronting a real resurgence of anti-Semitic expression in the United States. While there is reason to be bolstered by the outpouring of support from all over, there has also recently been a significant increase of anti-Semitic incidents.  The memory of the Holocaust reminds us of our need to remain vigilant in the face of such anti-Semitism.

But it is wrong to somehow suggest by invoking the Holocaust that our suffering is unique in human history.  If we do not assert ourselves away from a despair of existential and fatalistic alienation, we can descend towards moral supremacy, narcissistic self-reliance or an unhealthy attachment to oppressive authority.

The struggle to not be consumed by our feelings of vulnerability is timeless. The Torah offers such insight at a particularly familiar and transformative moment in Jewish history.

Moses is wandering in a forsaken plain, his people enduring bondage, as he encounters the burning bush. The bush is particularly striking in the landscape because it appears both engulfed in fire and isolate. Was that what attracted Moses to the burning bush — his connection to feeling alone and nearly consumed?

An ancient commentary offers to us, “Why did God show Moses such a symbol? Because Moses had thought to himself that the Egyptians might consume Israel; hence God shows him a fire which burnt but did not consume; saying to him: Just as the thorn bush is burning and is not consumed, so the Egyptians will not be able to destroy Israel.” (Midrash Rabbah 2:5)

From this exegetical wisdom, we may learn an important lesson: we can seek to overcome our existential sense of persecution when we take the necessary time to truly confront our deepest vulnerability.

How protective are we to claim an exclusivity to our suffering because we wish for our tragedy of the Holocaust to be fully heard? In so doing, we may unintentionally build barriers — between ourselves and those members of other vulnerable populations — who have also experienced intolerance and tragedy.

Yearly, my congregation has a Holocaust Remembrance Commemoration which is integrated into our Shabbat evening worship service. We are deeply honored to have a different Holocaust survivor as a guest speaker at this annual event. This year, we heard from Martha Weiman, who was younger than 5-years-old, when the Nazi regime took power.  She shared with us how she watched the burning of sacred texts in front of her synagogue, as a young child, not even being able to fully absorb what was going on.

Although Martha lost relatives in the Holocaust, her entire immediate family — both parents, two older brothers and herself — miraculously managed to escape in a harrowing journey to America. The time in Nazi Germany, though, had taken a terrible toll. Her father, once imprisoned and tormented by the Nazis, physically suffered and eventually succumbed to a nervous background.

Through Martha’s life experiences of the Holocaust, she also relates deeply to the experiences of immigrants. Observing the many Hispanics who now work as laborers taking care of the yards in her neighborhood, she thinks back to her own father. Once a successful businessman, having lost nearly everything, her father was handed a lawn-mower in order to provide for his family. Martha sees a commonality between her own father’s path towards renewal and that of so many Hispanic immigrants, joined together building new lives through the dignity of work.

After Martha spoke, Maria Givens, a member of the Coeur d’Alene tribe in Idaho, now working in Washington, DC at the National Congress of American Indians, told her story. Just as Martha, Maria has traumatic memories from childhood. She remembers white supremacists regularly terrorizing members of her reservation, including spraying gunfire through homes where babies were innocently laying in their cribs.

Somewhat mirroring Martha’s experience of book burnings and synagogue defacement, Maria recounted widescale methods of cultural annihilation and degradation. She expressed how her grandparents were once forced to bring all the community’s sacred objects and ceremonial clothing to the local church, never to see these precious items again. In an act of defiance, her grandparents courageously hid some of their family items. Her mother now wears them proudly at ritual occasions. I thought of the meaningfulness when Jewish communities read from Torah scrolls rescued from the ashes of the Holocaust.

After each having a devoted time to speak, Martha and Maria then engaged in a facilitated dialogue regarding how their personal histories relate to today’s climate. Both are deeply concerned about the atmosphere of the country and view the divisive rhetoric as an assault on their moral conscience.

At one point, Maria read a poem, authored by her cousin, Sherman Alexie, entitled, “The Game Between the Jews and the Indians is Tied Going Into the Bottom of the Ninth Inning,” that reads,

So now, when you touch me

my skin, will you think

And what will you remember

when your skin is next to mine

No, we will only think of the past

as one second before

where we are now, the future

just one second ahead

but every once in a while

we can remind each other

that we are both survivors and children and grandchildren of survivors.

Offering the poem, along with hearing Martha and Maria engage with one another, our speakers challenged the congregation — many of whom were non-Jewish visitors who came specifically for this occasion — to not be bystanders. Rather than our viewing survivors as powerless victims, the speakers reminded us that they — and we — have agency. Will we speak up in a way that privileges the powerless over the powerful? Will we use the horrific experience of our past to embrace others who are vulnerable?

In a time of deep divisiveness, it is especially important to value each other’s opinions and to see each other as indispensable.

Maria, who had never previously been in a synagogue, expressed how grateful she was for us to hear her story and to listen to ours. Martha admitted to not having previously placed Native Americans at the forefront of considerations when thinking of the tapestry of besieged religious and ethnic minorities. And yet, Martha felt a real connection to Maria’s experience. Maria and Martha both thought their juxtaposition, so different and yet so similar, sent a strong message of our need to listen and support one another.

We best honor the victims of the Holocaust when we give voice to those who are persecuted.  In the prophetic and immortal words of the late Elie Weisel, “Neutrality helps the oppressor, never the victim. Silence encourages the tormentor, never the tormented.”

About the Author
Rabbi Ari Plost is the rabbi of B’nai Abraham in Hagerstown, Maryland and Vice President of the Hagerstown Area Religious Council.
Related Topics
Related Posts
Comments