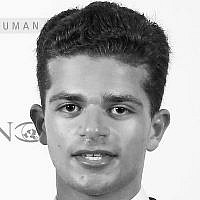 The Blogs
Joseph Masri
Apply for a Blog
Please note that the posts on The Blogs are contributed by third parties. The opinions, facts and any media content in them are presented solely by the authors, and neither The Times of Israel nor its partners assume any responsibility for them. Please contact us in case of abuse. In case of abuse,
Report this post. 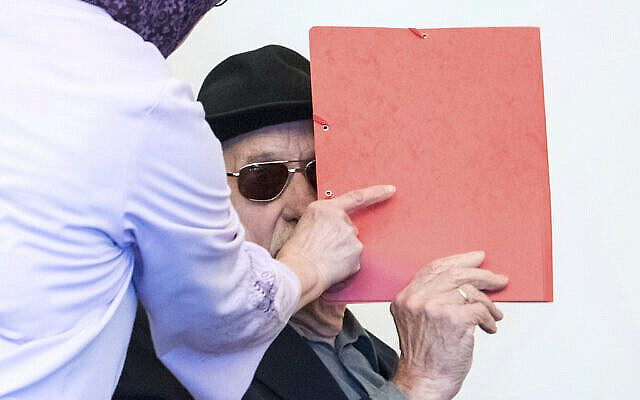 Since the Holocaust, the virus of genocide has infected Rwanda, Cambodia, Bosnia, Rohingya and Darfur amongst others. This epidemic is responsible for considerably more deaths than COVID-19. So, isn’t it time we also searched for a vaccine for genocide?

Unlike COVID-19, a vaccine to genocide is readily available. However, its access is restrained by the law.

It was the Italian philosopher Giorgio Agamben who observed how the ‘law did not exhaust the problem (of the Holocaust), but rather that the very problem was so enormous as to call into question law itself, dragging it to its own ruin’.

The Frankfurt Auschwitz Trials (1963-65) exposed the impracticality of using an ordinary penal code to try an extraordinary crime. For those defendants whose roles at Auschwitz did not entail direct killing, German jurists required evidence of intended participation in an act of direct murder for conviction of abetting.

Given the obstacles in belated evidentiary gathering and the state-directed nature of the Holocaust which concealed intent, this ensured the acquittal of the SS dentist and two clerks in the Auschwitz trials. When the 2nd Panel of the Federal Court of Justice upheld this ruling in 1969, it established a prosecutorial standard in Germany dictating that serving in a concentration camp was not in itself sufficient to secure a conviction. 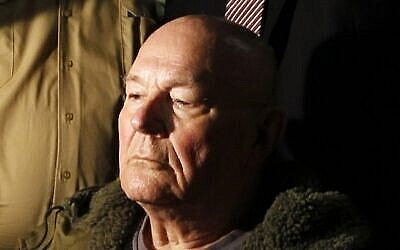 It was not until the conviction of the former Sobibor extermination camp guard John Demjanjuk at the age of 93 in 2011 that German jurists altered their interpretation of what constituted abetting. German prosecutors in Ludwigsburg reasoned that because Sobibor was a ‘factory of death’, anyone who served in the camp irrespective of their role was an accessory to murder. To secure Demjanjuk’s conviction, the prosecution just needed to attest to his presence at Sobibor which they achieved with a single identity card.

Since then, five other camp functionaries have been tried in proceedings each dubbed as the ‘last Nazi trial’. Just last week, the 93-year-old former Nazi guard Bruno Dey received a two-year suspended sentence by a Hamburg court for abetting the murder of over 5,000 prisoners whilst serving at Stutthof concentration camp. 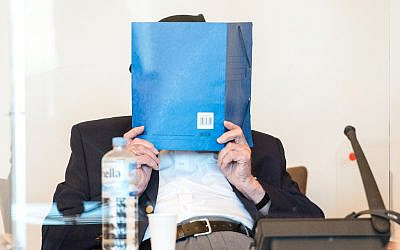 Bruno Dey, a former SS-watchman at the Stutthof concentration camp, hides his face behind a folder at the start of a hearing in his trial on July 23, 2020 in Hamburg, northern Germany (Daniel Bockwoldt / POOL / AFP)

Although the prosecution’s juristic solution in these recent trials has been more efficacious at securing convictions and correcting the historical record, they are underpinned by the illiberal doctrine of joint criminal enterprise. By maintaining that guilt precedes function – a theory antithetical to the core of due process – the prosecution has been blind to how these proceedings can serve as a vaccine to genocide. The accused in these trials, who are all ailing nonagenarians having held low-level positions from watchtower guards to accountants during their adolescent years, provide an opportunity to understand the motives of these defendants so ordinary, that history will no longer personify Adolf Eichmann as the ‘banality of evil’.

Dey does not come across as the Eichmann who said that he would ‘leap laughing into the grave because the feeling that he had five million people on his conscience would be for him a source of extraordinary satisfaction’. Dey was 17 when he was transferred to Stutthof after being labelled unfit for combat duty due to a heart condition. In his opening court statement, Dey was surprisingly admissive and contrite as he confessed that ‘the images of misery and horror have haunted me my entire life’. Yet he still maintained that ‘I was forced to do it, it was an order’. 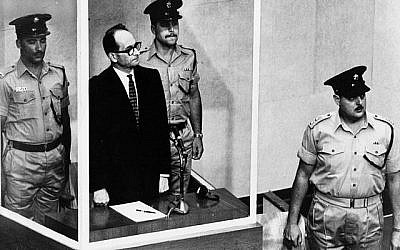 This 1961 file photo shows Adolf Eichmann standing in his glass cage in the Jerusalem courtroom where he was tried and convicted of war crimes committed during World War II. (AP Photo,b/w file)

By reasoning that Dey’s guilt was derived by the virtue of his presence at Stutthof, the prosecution pre-empted Dey’s response in deference to superior orders. The prosecution had relegated him to a mere cog in a machine. They had failed to individualise his guilt. Dey exploited this upon remarking, ‘What use would it have been if I had left, they would have found someone else?’.

This abdication of individual responsibility represents the greatest challenge to genocide prevention. Dey’s trial has produced a swathe of sympathisers who have propagated his alibi of superior orders. Last October, Anne Widdecombe condemned the trial arguing that Dey ‘would have been shot’ if he had defied his orders.

One of the most revealing statistics about the Holocaust is that there was never a recorded case where a SS officer suffered life-threatening consequences defying orders. Yet this is beside the point.

Dey’s apologists defend him not because of the potential consequences of resistance, but because on some level, they are Dey. They know that if they were in Dey’s shoes as a 17-year-old in Nazi Germany, they might have also abetted genocide.

This is arguably the greatest dilemma the Holocaust poses to the law. The most heinous crime to ever have taken place was also the most human of crimes. Only by being so human could it have become so inhumane.

What the law is not equipped to appreciate is that Dey’s guilt derived not from his actions, but his inaction. In comparison to Hannah Arendt’s bureaucratic Nazis who did not visualise the implications of their actions, the banality of most of the accused in these proceedings was that they opted for the relative comforts of concentration camp life over probable death on the Eastern Front. Demjanjuk of course was a Trawniki prisoner of war whose alternative was starving to death in a prisoner of war camp.

If we should elicit one lesson from the Holocaust it should be that we are not born with reflexes to resist the impulse of suspending our moral judgement when our freedom to rationalise is impinged upon. The crime of the defendants in these trials was that they had forfeited to Nazism their obligations as human beings to apply reason which would have distanced themselves from evil. This was the banality of their evil. Yet this existential message cannot be exposed by a retributive criminal system.

In this file photo from April 23, 2015, former SS guard Oskar Groening waits for the start of his trial in a courtroom in Lueneburg, Germany. (Julian Stratenschulte/ dpa via AP,file)

Despite acknowledging his ‘moral’ guilt during his trial in 2015, the former ‘Accountant of Auschwitz’ Oskar Gröning refused to confess his ‘legal’ guilt. To have done so would have led Gröning to face a minimum three-year prison sentence at the age of 94 after originally incriminating himself during an interview with the BBC in 2005 in which he confessed to his crimes to rebut Holocaust denial.

Only if Germany abandons its ordinary legal apparatus for these trials will they avail themselves to the genocide vaccine: restorative justice.

In the aftermath of the Rwandan genocide, the government instituted a plea-bargaining scheme if the accused confessed to their crimes. Rather than penalising confessions of guilt, Rwanda’s Gacaca courts incentivised admissions through less punitive sentences. An appropriate penalty in today’s proceedings might involve community service speaking against Holocaust denial.

For Gacaca confessions to be admissible, the defendant must admit their guilt, describe what they did, explain why, and apologise to their victims. By probing one’s individual guilt through forcing the accused to deeply question their actions step-by-step, only then can society and the defendants themselves learn how to resist the banality of evil.

Not only would these trials pay greater attention to the survivor witnesses, but they would deter the nonagenarian defendants from allowing their age to become a defence strategy. The Demjanjuk trial, in which the defendant was absent for a quarter of the trial due to his dubious ailments, lasted eighteen months.

The issue with restorative justice and in particular Gacaca’s confessional procedure is how it has been criticised for its leniency which can incentivise defendants to provide half-truths. These concerns, whilst legitimate, would not exacerbate the status quo of the last Nazi trials. A lenient sentence would be more punitive than no punishment, as except for Dey, all the accused in these proceedings have avoided imprisonment in these proceedings either by their trial being abandoned due to ill-health or the defendants dying upon appeal. Besides, Holocaust survivors associate justice today less with retribution.

Last week a German court announced that it had charged a 95-year-old former Stutthof guard for war crimes in what could potentially be the last Nazi trial. If so, it is befitting that the defendant who will likely conclude the seven-decade process of these proceedings will not be a camp adjutant or an architect of the Final Solution. It serves as a reminder that these ordinary men were just as integral to the functioning of the Holocaust. But its meaning will be lost if Germany fails to use genocide’s vaccine.

If a restorative justice framework had been used during the Gröning trial, the ‘Accountant of Auschwitz’ might have added that he was not just ‘morally guilty’, but ‘legally’ as well. This single statement would have served justice more than the imprisonment of a nonagenarian ever could. If the last Nazi dies before a public admission of individual legal guilt is expressed, this would be the greatest injustice to the legacy of the Holocaust.

About the Author
Joseph is a legal enthusiast and History graduate from the University of Warwick.
Related Topics
Related Posts
Comments