This month saw the anniversary of an event known as ‘partition’. That is, the violent and still contested division of Pakistan and India in 1947.

Prior to the British Raj, the Muslim Moguls had ruled India. Steeped in that sense of history and heritage, Pakistan’s founder Muhammad Ali Jinnah argued that were Muslims to be left a minority in India, its majority Hindu population would not treat them fairly. This is known as the ‘two nation theory.’ Hindsight may indeed have proven Jinnah wrong.

Pakistan, after all, does rather a poor job itself of treating Muslims fairly, but I can see why Jinnah’s Muslim League party felt insecure about this prospect. This is especially so considering the recent resurgence in Hindu nationalism under the ruling BJP.

And though Jinnah wanted a homeland for Muslims carved out of the Indian crown jewel, he was no religious man himself. Famously trained at Lincoln’s Inn as a barrister-at-law, Jinnah is reported to have drunk alcohol, ate pork and married outside of his narrow faith community to a Parsi.

Indeed, in one of his most well-known speeches addressing Pakistan’s Constituent Assembly, Jinnah stressed that his vision for Pakistan was for it to be a place where “in course of time, Hindus would cease to be Hindus and Muslims would cease to be Muslims, not in the religious sense, because that is the personal faith of each individual, but in the political sense as citizens of the state.”

Of course, the exact opposite eventually happened to Pakistan. Much of Pakistan’s spiral towards religious fanaticism since was due to Jinnah dying only one year after the creation of his country, but some of it can be traced to the founding philosophy of creating a nation based on solely a religious identity.

A state created for Muslims would beg the question of ‘who is Muslim’, and hence ‘who is not Muslim enough.’ By today’s rising extremist standards in Pakistan, even Jinnah – a shi’i not a sunni – would be excluded.

One could ask, what did Jinnah expect would happen?

But that’s done now. Pakistan exists, and though many question her current trajectory, no serious public figure questions her legitimacy. Certainly, few Muslims do. And yet a few months later, the state of Israel was created as a homeland for Jews.

The founding Zionists were convinced, just like Jinnah, that Jews could not risk being a minority ever again. And so, largely following the vision of Theodore Herzl, the Zionist movement was born.

It is uncanny how little difference there exists in the founding justification and subsequent behaviour of these two states. In both cases, the founders were non-devout and secular.

In both cases the religious communities became late adopters of the idea, and eventually its net victors.

In the founding of Israel and Pakistan, both involved mass population displacement. Not without reason, until this day, 1948 Palestinians remember their ‘Nakba’, their tragedy and demand a right to return.

Likewise, pre-partition India witnessed mass murder as Hindus and Sikhs were forced from the Punjab, and Muslim ‘muhaajirs’ had to brave the infamous ‘ghost trains’ towards Karachi ports.

Both countries are still involved in disputed land claims. Palestine is yet to be realised, just as Pakistan and India remain at knife-edge over Kashmir.

Both areas are defined as ‘disputed territories’. Likewise, until today, Pakistan is riddled with internal independence movements.

Having traveled to Balochistan’s capital Quetta, and visited interior Sindh in Pakistan’s deep south, I can attest to the strength of feeling against the ‘occupying Punjabis’ – people of my own heritage – that has sparked in both cases armed insurrection against the Pakistani state.

Let us not forget that another such nation, where I have also visited, already broke from ‘Pakistani occupation’ in 1971, to form Bangladesh. Again, in all these cases, there has been at times a disproportionate, state-heavy response to often beleaguered but militant separatists, although you’d be forgiven for only having heard about Israel’s actions in Gaza. 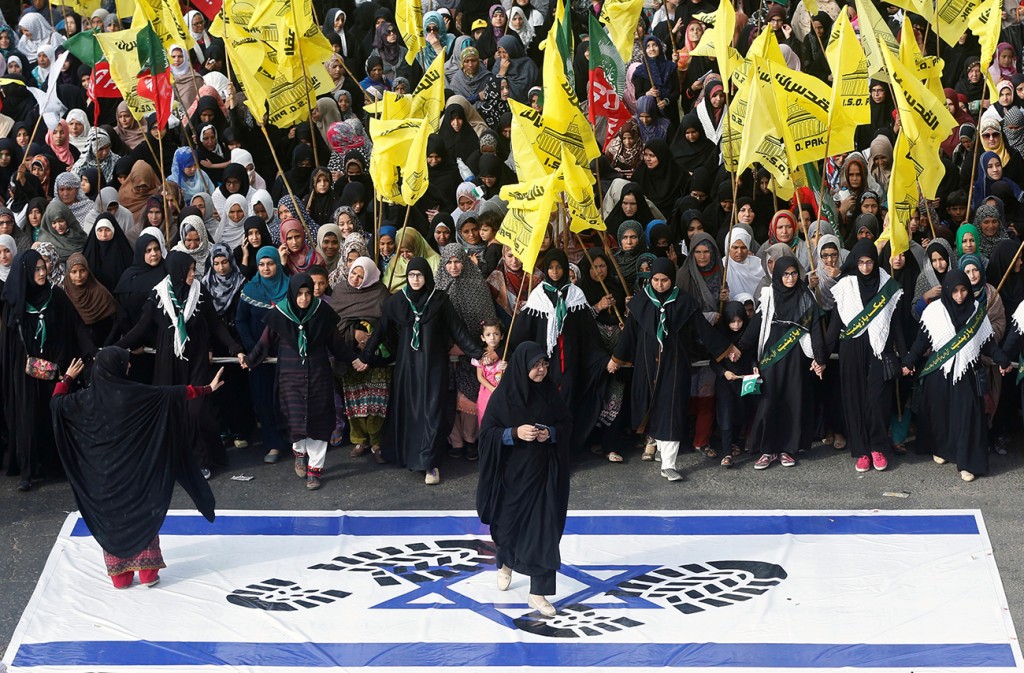 Shi’ite Muslims prepare to walk over the flag of Israel in a rally marking the annual al-Quds Day, or Jerusalem Day, during the Muslim holy month of Ramadan in Karachi, Pakistan.
Picture credit: Press Association

These land disputes also take on religious significance, just as they do with Jerusalem — where I too have visited on pilgrimage.

Every year, thousands of Indian Sikh pilgrims arrive in Pakistan’s Lahore to participate in religious and cultural rituals marking the birth anniversary of their most important saint, Baba Guru Nanak Dev Jee who was born in what is now Pakistani Lahore.

There, an old Sikh temple still stands next to the Badshahi Mosque, two other sights that are well worth seeing.

Many Sikhs never truly overcame the loss of control over their holy sites, sparking a Khalistan independence movement, and in one case leading to the assassination of India’s Prime Minister Indira Gandhi by her Sikh bodyguard.

And yet, there are no calls to boycott Pakistan by the far-left and their Islamist fellow-travellers.

No fashionable movement exists to shame musicians who choose to perform there, no blockade of speakers at universities and no protests decrying the ‘historic injustices’ of the Punjabis.

The truth is, there is absolutely nothing that can be said of Israel, that cannot be said of Pakistan.

This incessant focus by us Muslims on the state of Israel – even as jihadists burn everything around us – is the perennial ‘whatabout’ excuse used to distract us from considering self-scrutiny and introspection.

It is precisely this lack of internal criticism that is allowing Muslim-majority societies to fall apart at the seams while we insist that everyone else is worse than us.

We Muslims have become the totally self-unaware cry-bully in the school playground.

That child who everyone is scared of upsetting, but no-one really likes.