Where do you draw the line? Until what point do you let someone speak because of their freedom to do so, and beyond what point does it – should it – become an offence? With a resurgent white supremacist movement spreading its hate beyond the United States, that is now an urgent question.

So, here’s what we know: Urging people to kill Jews is an offence. Or is it? What’s the offence? In which countries is it an offence? Does it matter how you urge it? What if you urge people to kill Zionists (who are not always Jewish)? What if you simply say you wish Zionists would be killed? Turning to easier matters, we know it’s illegal to discriminate against Jews on the basis of them being Jewish, but is it illegal to urge the discrimination of Jews? What about the discrimination of Israelis? Of Zionists? How’s about plain old abuse? Is it illegal to say Jews are big-nosed, greedy Israel loyalists? Or is it just racist and bigoted? What if there’s no victim – does that make a difference? What if the bigot says all Zionists are big-nosed greedy Israel loyalists? What if they say all Zionists are racist? All Israelis are greedy? What if all of the above were said of the Prophet Mohamed, with cartoon drawings to boot? Where, in short, is the line?

And what happens when someone crosses that line? Jail? Education? Apology? Take their phone, laptop and Twitter handle away? For hate speakers, it sometimes feels like anything less than the stocks is leniency, but anything custodial is way too harsh, given that these are mere words, uttered in a free society, which is meant to let idiots say idiotic things.

Where that line falls determines who, today, is an anti-Semite. It seems to be changing as I type. What of the guy who hates Israel for “taking Palestinian land” and who says all Israelis are thieves? Is he anti-Semitic? Perhaps not, but what if he said all Jewish Israelis are motivated by greed? And what of the pious old Christian woman who says “Jews ought to know better” and be kinder to the Palestinians because of what they went through? Is she a Jew-hater? Maybe not, but what if she adds: “They should be careful not to end up like the Nazis.” What then? Pro-Israel types would throw the book at her, and be well within their rights to do so, even though she’s still just trying to say: “You’re better than that.”

If this is hate speech today, what to do with the offenders? What law did they just break? And what’s the sanction? Do they even know they broke a law? Few have ever even heard of the International Holocaust Remembrance Alliance definition, adopted by Theresa May in December, which redraws the anti-Semitism line yet again, and which now includes any reference to Israel being a racist state, despite Israel’s different laws, courts and rules for Jews and Palestinians. Pointing this out is, since December, anti-Semitic, so so am I. But is it illegal? Regardless, does the IHRA stifle free speech, or does it simply protect Jews from the incitement and violence that would inevitably follow if I said Israel has different systems for different peoples? Should I get me hence to the stocks, or should I be allowed to speak?

The issue is immensely serious, not least because of the evolving nature of communication and the proven link between words of hate and works of violence. America’s First Amendment protects free speech, but in the UK there is no such prescription, so we’re feeling our way through this issue. Some assume us strict, but we do not go as far as Germany or France, where Holocaust denial is outlawed, and despite its constitutional guarantee, we go nowhere near as far as the U.S, where some in Congress think criticism of Israel is anti-Semitic, and where a new bill, introduced in the Senate, would ban the advocacy of boycotts against Israel.

Where free speech ends and where illegal hate speech starts is one of today’s most difficult and pressing questions. There is no legal definition of anti-Semitism in the UK, so we look to experts to help us, but these being experts, they tend to disagree. Still, hope remains. In Britain, there’s always a fighting chance that common sense will prevail. As the CST always says, it depends on the context. If it’s David Duke carrying a burning cross through Golders Green saying Zionists are a bit greedy, you’d have to wonder. 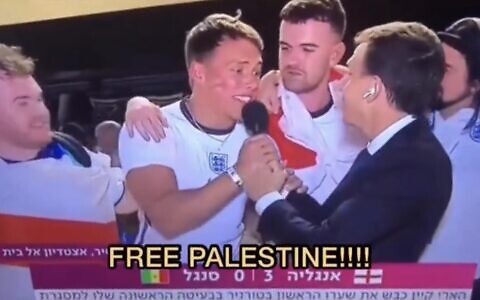